Pope at Mass in Tokyo: Gospel of life urges us to be a “field hospital”

Pope at Mass in Tokyo: Gospel of life urges us to be a “field hospital” 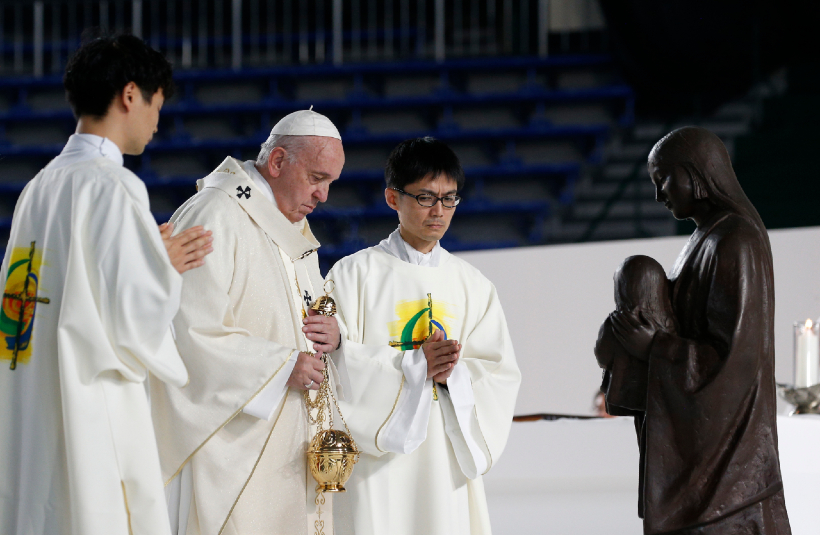 Pope Francis celebrates Mass on Monday afternoon at the Tokyo Dome stadium. In his homily, the Pope says we need to get our priorities right, in line with the life of Jesus.

As the starting point of his homily on Monday, Pope Francis drew attention to the Sermon on the Mount, saying it indicates the beauty of the path we are called to take to reach Jesus, in whom we have the freedom of becoming God’s beloved children.

Hurdles to being God’s children

Yet along the way, the Pope observed, the freedom of being God’s children can be repressed and weakened by a vicious circle of anxiety and competition. A frenetic pursuit of productivity and consumerism becomes the sole criterion for measuring or defining who we are or what we are worth.

The Pope warned that this criterion slowly makes us insensitive to the really important things and yearn for things that are superfluous or ephemeral.

The Pope noted that in Japan, with its highly developed economy, many people are socially isolated on the margins who are unable to grasp the meaning of their life and existence. He lamented that home, school, and community, which are meant to be places where we support and help one another, are being eroded by excessive competition in the pursuit of profit and efficiency. As a result, many lose their peace and stability.

As an antidote to this, Pope Francis offered the words of Jesus soon after His Sermon the Mount: “Do not be anxious about your life… about tomorrow”. The Pope said these words are not an encouragement to ignore what happens around us or to be irresponsible about our daily duties and responsibilities. Rather, they are an invitation to get our priorities right, according to His way: “Seek first the kingdom of God and His righteousness, and all these things shall be yours as well”.

Thus, the Lord is inviting us to re-evaluate our daily decisions and not to become trapped or isolated in the pursuit of success at any cost, including the cost of our very lives.

“Worldly attitudes that look only to one’s profit or gain in this world, and a selfishness that pursues only individual happiness,” the Pope said, “in reality leave us profoundly unhappy and enslaved, and hinder the authentic development of a truly harmonious and humane society”.

Embracing life as it is

The opposite of an isolated, enclosed and even asphyxiated “I”, the Pope said, can only be a “we” that is shared, celebrated and communicated. In this regard, he said, “genuine care for our own lives and our relationships with nature is inseparable from fraternity, justice, and faithfulness to others”.

Hence, the Christian community is invited to protect all life and testify with wisdom and courage to a way of living marked by gratitude and compassion, generosity and simple listening. The Christian community is one that is capable of embracing and accepting life as it is, with all its fragility and its simplicity, such as a disabled or frail person, a foreigner, someone who made a mistake, someone ill or in prison.

In this, Jesus leads by example. He embraced the leper, the blind man, the paralytic, the Pharisee, the sinner, the thief on the cross and even forgave those who crucified Him.

The Pope said that the proclamation of the Gospel of Life urgently requires that we as a community become a field hospital, ready to heal wounds and to offer always a path of reconciliation and forgiveness. For the Christian, the only possible measure by which we can judge each person and situation is that of the Father’s compassion for all His children.

This way, the Pope said, we can become the prophetic leaven of a society that increasingly protects and cares for all life.