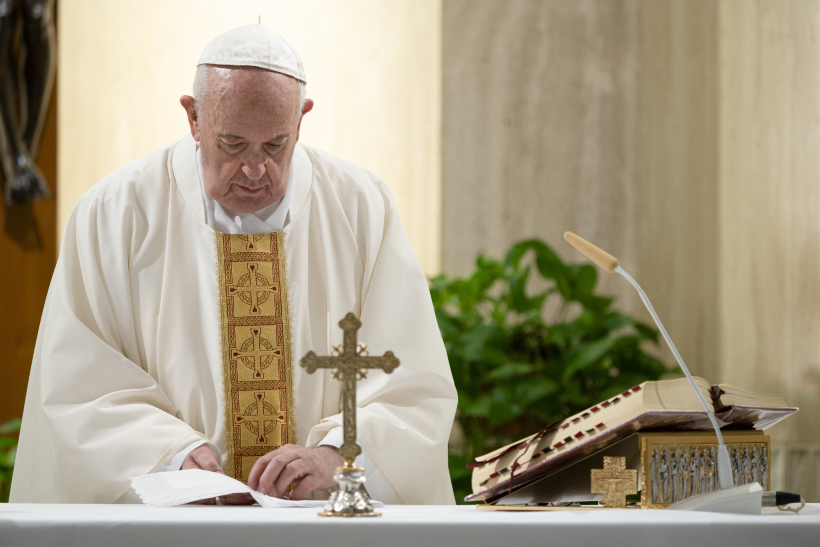 During his daily Mass in the Casa Santa Marta, Pope Francis prays for pregnant women, and warns about the danger of a “virtual” faith in the time of coronavirus.

Pope Francis opened Mass on Friday morning by turning his thoughts to pregnant mothers, who are “anxious and worried”. The Pope said they may ask themselves in what world their child will live. “May the Lord give them the courage and confidence” to know, the Pope prayed, that “it will certainly be a different world, but also one that the Lord will love tremendously”.

Pope Francis then turned to the Gospel of the day (John 21: 1-14). This Gospel passage recounts the third time that Jesus reveals Himself to His disciples after His resurrection. This time, at the Sea of Tiberias. Jesus appears while His disciples’ are fishing on the lake, but they do not recognise Him.. When they tell Jesus they had not caught anything, Jesus says to them, “cast the net over the right side of the boat and you will find something.” So they did, and the net filled up so much that they were almost unable to pull it up onto the boat. When they return to shore and were eating breakfast with the Lord, none of the disciples dared ask “who are you”, for they knew, it was the Lord.

Pope Francis said that this passage, “makes us think of another miraculous catch of fish”. He explained Luke’s account of another fishing passage in chapter 5, in which the same thing happened. However, in that passage the disciples “were struck by amazement”. Today, we see no amazement, said the Pope. This shows that there has been progress: “a journey they have undergone in the knowledge of the Lord, in intimacy with the Lord: in familiarity with the Lord”, he said.

The same journey awaits we Christians, continued the Pope. One of “walking, of progressing in familiarity with the Lord”, he said. “He walks with us, we know that it is He”, added the Pope.

Pope Francis then noted that the apostles’ familiarity with the Lord was “always a communal one”, and that it was “always with the sacrament, with bread”. The Pope explained that the reason he mentioned this was because of the “danger” we are living through with this pandemic. He said that though we are all connected spiritually, through the media, we are not physically together. “We are together, but not together”, said the Pope. This is also a problem sacramentally speaking, since those who are connected via the media can only receive a “spiritual Communion”, he said.

“This is not the Church”, said the Pope. “This is the Church in a difficult situation”, he explained. Although the Lord is permitting the current situation, “the ideal of the Church is always with the people and with the Sacraments. Always.”

The Pope concluded by saying that although in this moment we must familiarise ourselves with the Lord in this way, we must eventually “get out of the tunnel”.

“The Church, the Sacraments, the People of God are concrete” he said. They have made a journey of maturity in familiarity with the Lord: “let us learn to do so, too”.