Pope at Mass prays for the elderly

Pope at Mass prays for the elderly 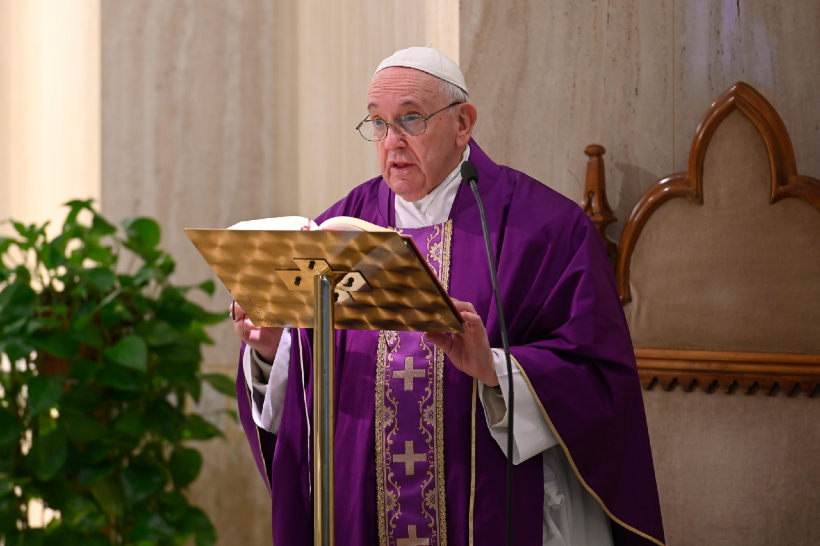 Before beginning Mass at the Casa Santa Marta on Tuesday morning, Pope Francis asks everyone to pray for the elderly “who are suffering in a particular way from interior solitude”.

“Today I would like us to pray for the elderly”, were Pope Francis’ first words as he began Mass at the Casa Santa Marta on Tuesday morning. They “are suffering in a particular way at this moment: with great interior solitude, many times with a lot of fear. Let us pray to the Lord that He might be near our grandparents and all the elderly, that He might give strength to those who have given us wisdom, life, our story. May we also be near them with our prayer.”

During his homily, Pope Francis reflected on Jesus’ teaching on forgiveness from the day’s Gospel from Matthew (18:21-35).

Pope Francis began his homily saying that Jesus left us a “catechesis” about fraternal unity. “I assure you, when two or three of you agree and ask for a grace, it will be granted you”, he quoted (cf Mt 18:19).

To Peter’s question about whether forgiving someone seven times was sufficient, the Pope said that Jesus’s response means that “we always need to forgive”.

“It’s not easy to forgive because our self-centered hearts are always attached to hatred, revenge, resentment. We’ve all seen families destroyed by hatred…. It gets passed down from one generation to the next. Siblings, who in front of a parent’s coffin, don’t even greet each other because they’re carrying past resentments. It seems that attachment to hatred is stronger than attachment to love.”

This is the devil’s “treasure”, the Pope continued. He incites our hatred to destroy everything. It’s “often even over small things”, he said.

“It’s what destroyed this God who came not to condemn but to forgive. This God who is able to throw a feast for a sinner who draws near to Him and forget everything. When God forgives us He forgets all the evil we’ve done. Someone has said it’s God’s sickness. He doesn’t have a memory. He can lose His memory in these cases. God loses his memory regarding the ugly story of so many sinners, of our sins. …. He only asks us to do the same, to learn how to forgive.”

Condition for going to heaven

Pope Francis reminded us of another Gospel passage where we are asked to reconcile ourselves with someone who has something against us (Mt 5:24). “Don’t come to me with love for me in one hand and hatred for your brother or sister in the other”, Pope Francis put on God’s lips.

“Forgiving is a condition for going to heaven: the parable that Jesus tells us is very clear…. The Lord teaches us this wisdom of forgiving which is not easy… When we go to receive the Sacrament of Reconciliation, let’s first ask ourselves: Do I forgive?  If I feel that I do not forgive, I can’t make-believe that I’m asking forgiveness because I will not be forgiven. Asking forgiveness means forgiving. Both go together. They cannot be separated.”

Pope Francis concluded his homily with the prayer:

“May the Lord help us understand this, to lower our heads so as not to be proud but magnanimous in forgiving.”