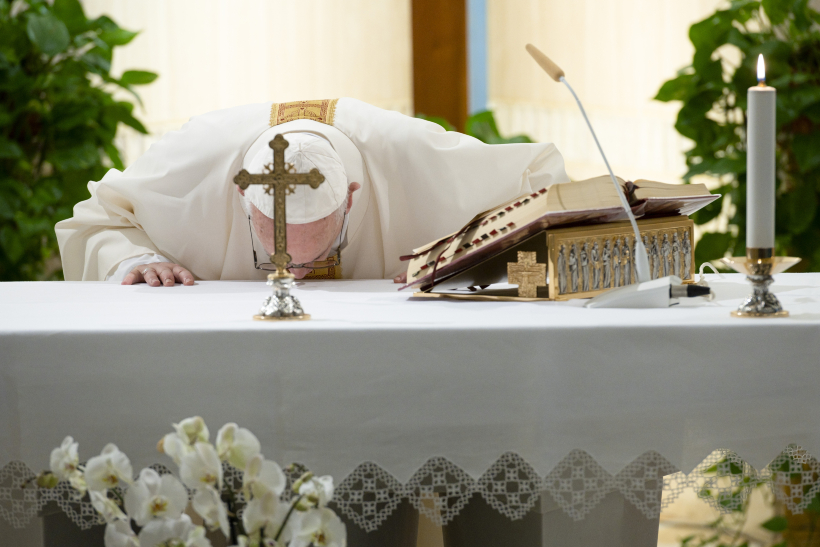 At Mass in the Casa Santa Marta on Saturday, Pope Francis urges prayers for those who bury the dead during the pandemic, and delivers a homily on the spirit of worldliness.

Pope Francis celebrated Mass at the Casa Santa Marta on the Saturday of the Fifth Week of Easter. At the start of Mass his thoughts turned to those who bury the dead during this pandemic.

“Let us pray today,” he said, “for people who bury the dead during the pandemic.”  “To bury the dead,” he said, “is one of the works of mercy and, obviously, it is not something pleasant. Let us also pray for them because they also risk their lives and can be infected.”

The Pope said that Jesus often speaks about the world and about hatred against Him and His disciples. He asks the Father not to remove the disciples from the world but to defend them from the spirit of the world.

The Holy Father thus dwelt on this worldliness that is capable of hating and destroying Jesus, His disciples and even corrupting the Church.

Worldliness, the Pope explained, is a proposal of life. It is a culture of the ephemeral, of appearance, of cosmetic make-up with superficial values.  It is a culture that knows no fidelity because it changes according to circumstances. Like a chameleon, it negotiates everything.

It is this worldliness that Jesus, in His prayer, asks the Father to defend us from. Worldliness, he continued, is a throwaway culture that goes according to convenience. It is also a way of life for many who call themselves Christians but are worldly. The concerns of the world drown the faith.

The Pope recalled the renowned 20th-century Jesuit theologian, Father Henri de Lubac who described worldliness as the worst of evils afflicting the Church.  Spiritual worldliness is a way of living Christianity that kills because it hates faith. Worldliness enters everywhere, even in the Church.

Pope Francis pointed to martyrs who are killed for hatred of the faith. He warned against the mistake of regarding spiritual worldliness as something superficial, saying it has deep roots.

Faith in Jesus – medicine to worldliness

Pope Francis recalled Saint Paul’s speech at the Areopagus in Athens, where he drew attention to the “unknown god” and began preaching the Gospel.  “But when he arrived at the cross and resurrection they were scandalized and left.”

The one thing that worldliness cannot tolerate, the Pope pointed out, is the scandal of the cross. “The only medicine against worldliness is Christ who died and rose for us. Victory against the world is faith in Jesus.” The folly of the cross and the victory of Christ is our victory too, the Pope said, referring to the First Letter of John.

The world hates Jesus and He prays to the Father to defend us from the spirit of the world. However, faith does not mean being fanatical or not dialoguing with others.

The Holy Father thus urged Christians to ask the Holy Spirit for the grace to be able to discern between worldliness and the Gospel, so as not to be deceived.