Pope at Mass: The Lord changes red to white

Pope at Mass: The Lord changes red to white 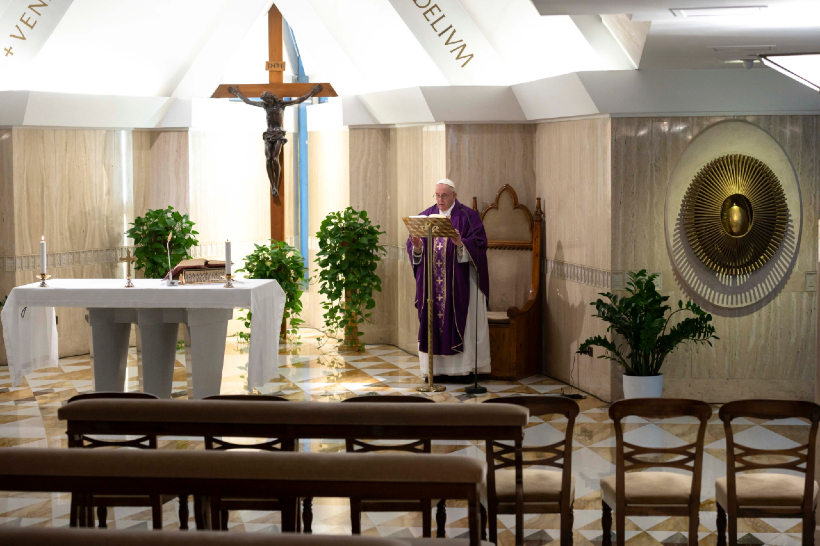 On Tuesday morning, Pope Francis celebrated Mass at Casa Santa Marta, praying for the sick and encourages priests to “have the courage to visit the sick”. Live Broadcast included.

“Yesterday the word of God taught us to recognize our sins and to confess them.” Thus Pope Francis began his homily on Tuesday. “Today,” he continued, “the Lord asks all of us sinners to dialogue with Him”. He then continued his reflection focusing on passage from the Book of Isaiah: “Come now, let us set things right, says the LORD: Though your sins be like scarlet, they may become white as snow”.

Like Adam and Eve, we tend to hide ourselves because of the shame we feel because of the things we have done. Sin makes us close in ourselves. God calls to us to talk about it with Him instead.

The Lord wants us to give Him our sins

Pope Francis then told the story about a saint who was discouraged. No matter what he did, he always felt that the Lord wasn’t satisfied. So, he asked the Lord what was missing. “Give me your sins. That’s what’s missing”, the Lord responded, the Pope said.

The Lord changes red to white

We deceive ourselves by not speaking with the Lord, Pope Francis continued. We pretend we are not sinners. This is what the Lord reproves the Doctors of the Law for. They did everything for appearance, he said, referring to the Gospel of Matthew 23.

“Appearance…  Vanity…  Covering the truth of our heart with vanity… Vanity never heals… Rather, it’s poisonous. It increases our hardness of heart. [Vanity] says, ‘don’t go to the Lord. Remain alone. Vanity is a place where we close ourselves to the Lord’s call. But the invitation of the Lord is that of a father, a brother. ‘Come on. Come here. Let’s talk. In the end, I’m the one who can change your life from red to white.”

Prayer can be real

The Pope concluded his homily, saying that the Word of the Lord shows us that our prayer can be real. We can even pray about the reality of our sins.

“The Lord knows who we are…but vanity invites us to cover that up. May the Lord help us.”

Until further notice, Pope Francis’ morning Mass will be broadcast live. You can view it in real-time at 7:00 am Central Eastern Time on www.vaticannews.va or via the Vatican News App, or through other Catholic televisions stations who are transmitting it. It is posted for later viewing on the Vatican News English YouTube channel, the Vatican News Facebook account, and on the Vatican News portal in the article summarizing the Pope’s homily.