Pope at Mass: there is no humility without humiliation

Pope at Mass: there is no humility without humiliation 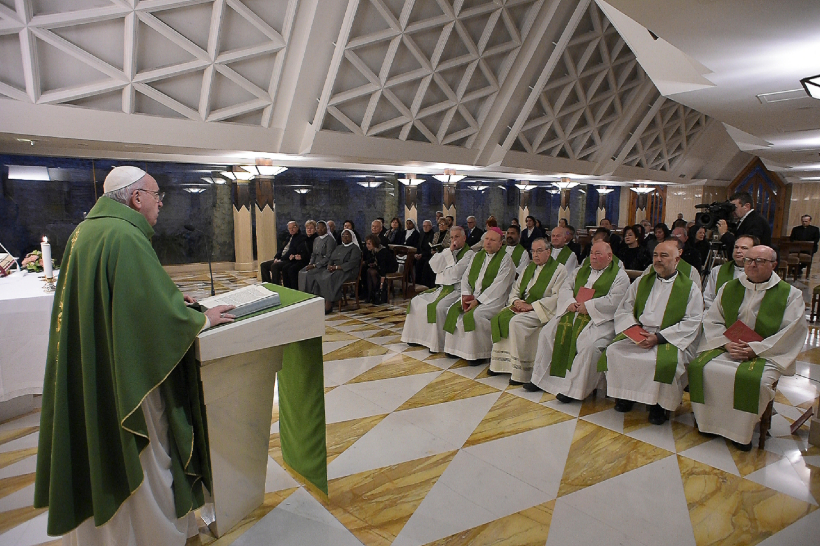 Commenting on the day’s Gospel, Pope Francis exhorts Christians to follow the path of humiliation as indicated by Jesus and John. He also urges pastors not to give in to worldliness, to the “temptation to climb”.

Don’t be “afraid of humiliation”.  Let us ask the Lord to send us “some” to “make us humble”, so we can “imitate Jesus better”.  The Pope’s exhortation came at Mass, Friday morning, at Casa Santa Marta, in the Vatican.

The way of Jesus

Reflecting on the day’s Gospel of Mark on the beheading of St. John the Baptist, the Pope explained how he was sent by God to show “the way of Jesus”. The “last of the prophets”, the Pope said, had the grace to say: “This is the Messiah”.

He explained that the task of John the Baptist was not so much to preach that Jesus would come and prepare the people as to bear witness to Christ and to do so with his life.  The Pope said that bearing witness to the path chosen by God for our salvation is the path of humiliation.  St. Paul explains this very clearly in his Letter to the Philippians: “Jesus annihilated himself to death, death on a cross”. And this death on the cross, this way of annihilation, of humiliation, the Pope said, is also our way, the way forward that God indicates for Christians.

The most humiliating end

The Holy Father pointed out that both John the Baptist and Jesus had the “temptation of vanity, of pride”.  After His fast, Jesus was tempted by the devil in the desert; and John was tested before the doctors of the law who asked him if he was the Messiah.  He could have answered that he was “his minister”, and yet he “humbled himself”.

The Pope said that both had authority over the people and their preaching was “authoritative”.  Yet both had “moments of lowliness”, sort of “human and spiritual depression”.  Jesus had his moment in the Garden of Olives, and John in prison was tempted by the “woodworm of doubt” whether Jesus was really the Messiah.

Both “end in the most humiliating way”.  Jesus dies on the cross, “the death of the worst criminals, terrible physically and morally”, “naked before the people” and “before His mother”.  John the Baptist is beheaded in the prison by a guard on the orders of a king who was “weakened by vices”, “corrupted by the whim of a dancer and the hatred of an adulteress”, the Pope said referring to Herodias and her daughter.

The Pope explained that John the Baptist, the great prophet and the greatest man born of woman, as Jesus regarded him, as well as the Son of God, both, chose the path of humiliation.  And this is the path that they show us and that we Christians must follow, the Pope said, stressing that the Beatitudes indicate the path of this humility.

The way of the world

Emphasizing that one cannot be “humble without humiliation”, the Holy Father invites Christians to learn from the day’s Gospel.

Pope Francis explained that when we try to draw attention to ourselves in the Church and in the community in order to have a position or something, it is the way of the world, a worldly way, which is not the way of Jesus.  He said this “temptation to climb” can also happen to pastors. This, the Pope said, is an injustice he cannot tolerate. “If a shepherd does not follow this humble path, he is not a disciple of Jesus,” Pope Francis said, adding, “he is a climber in a cassock”.  “There is no humility without humiliation”.