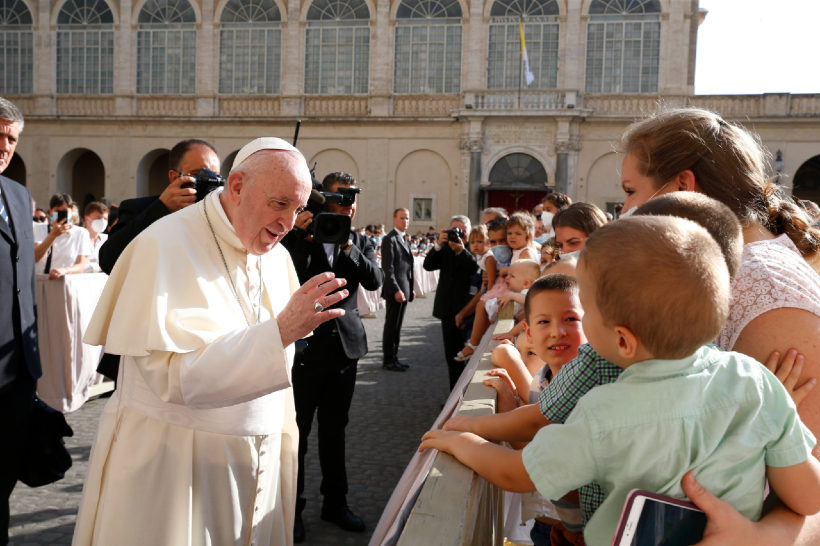 At the General Audience on Wednesday, Pope Francis says it is “time to improve our social love.”

Pope Francis focused his attention on the concept of the “common good” in his catechesis at Wednesday’s General Audience.

Seeking the common good together

Continuing his reflections on “Healing the World,” Pope Francis said we can emerge from the coronavirus crisis better than before “if we all seek the common good together.” At the same time, he lamented that we are beginning to see “partisan interests emerging,” with some people seeking to take advantage of the crisis for selfish purposes.

“The Christian response to the pandemic and to the consequent socio-economic crisis is based on love,” the Pope said, and especially the love of God for us. We in turn are called to love everyone – not only our friends and family, but even our enemies. This is difficult, the Pope acknowledged, but it is an “art that can be learned and improved.”

Building a civilization of love

Love, he continued, not only helps us to build personal relationships, but also allows “social, cultural, economic and relationships flourish, allowing us to construct a ‘civilization of love’,” Pope Francis said, using an expression beloved of the sainted Popes Paul VI and John Paul II.

The current crisis, said Pope Francis, is helping us to see that the good of each person individually is tied up with the common good of society as a whole, and vice versa. And he insisted, “A virus that does not recognise barriers, borders, or cultural or political distinctions must be faced with a love without barriers, borders or distinctions.”

If, on the other hand, solutions to the crisis are tinged with selfishness or egoism, the Pope said, “we may perhaps emerge from the coronavirus crisis, but certainly not from the human and social crisis that the virus has brought to light and accentuated.” Instead, everyone – and Christians in particular – have a duty to work to promote the common good.

Politics rooted in ethics and nourished by love

Pope Francis admitted that politics often has a bad reputation, and perhaps not without reason. A “good politics is possible,” though, he insisted, when it “puts the human person and the common good at the centre of its duty.” This calls for everyone, but especially those with social and political commitments and duties, to root their actions “in ethical principles,” and nourish them “with social and political love.”

Pope Francis said, “Christians, in a particular way the laity, are called to give good example of this and can do it thanks to the virtue of charity, cultivating its intrinsic social dimension.”

Now, said Pope Francis, is the “time to improve our social love, with everyone’s contribution.” The Holy Father insisted that everyone must do their part, with no one excluded. “Thus, through our gestures, even the most humble ones, something of the image of God that we bear with us will be made visible, because God is the Trinity, God is love.”

With God’s help, Pope Francis said, “we can heal the world,” if we all work together “for the common good.”