Pope: Learn to point the finger at yourself, to be freed of hypocrisy

Pope: Learn to point the finger at yourself, to be freed of hypocrisy 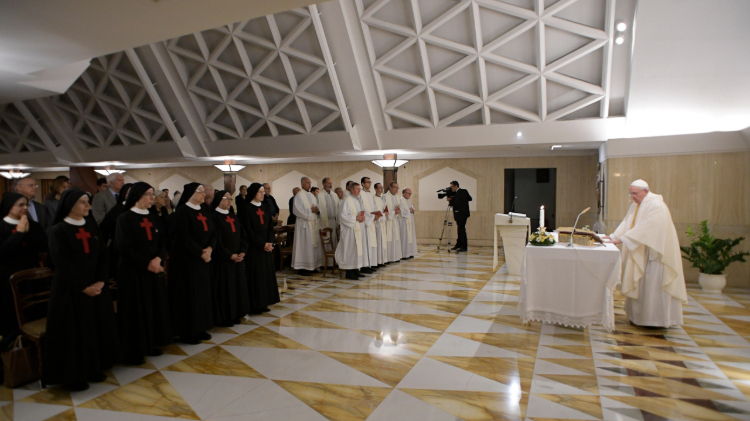 Reflecting on the reading during his daily Mass at the Casa Santa Marta, Pope Francis says that hypocrisy kills, and that learning to accuse ourselves and to open up to the Lord can cure us of it.

In his homily at Mass on Tuesday, Pope Francis says that Jesus does not tolerate hypocrisy. “We must be cured of hypocrisy,” he said, “and the medicine is knowing how to point the finger at ourselves before God”, since whoever is unable to do so is “not a good Christian”.

One way to another

In the Gospel reading, Jesus is invited to lunch by a Pharisee and is highly criticised by the master of the house because he does not perform ritual ablution before sitting at the table to eat.

Pope Francis explains that this behavior is not tolerated and is hypocritical because the Pharisees invited Jesus to lunch “to judge him, not to befriend him”. This is exactly what hypocrisy is, he says, “appearing one way but acting in another”.

Jesus often calls hypocritical Pharisees “whitened sepulchers”. This is not an insult, says the Pope, “it is the truth”. He goes on to explain that “a hypocritical attitude stems from the great liar, the devil”. The Pope says the devil is the “great hypocrite”, adding that all other hypocrites are his “heirs”.

Jesus, continues the Pope, likes to “unmask” hypocrites who use the devil’s language, as he knows that this is the attitude that will lead to his death.

Pope Francis goes on to say that anyone who may think “this form of hypocrisy does not exist” is mistaken. Though it is not “normal”, he says, it is “common” to “appear in one way but be another”. An example of this, says the Pope, is in the fight for power. Jealousy makes you act in a certain way, with poison within, poison to kill, he says, because hypocrisy “always kills”.

Open up to the Lord

The cure for this hypocrisy, continues the Pope, is in learning to “point the finger at ourselves. We must open up before God and release what we have inside us. This spiritual exercise, he says, is not common, “but we must try to do it”. We must see the hypocrisy and evil that we have in our heart, because the devil does sow evil. But whoever is unable to point the finger at themselves, is “not a good Christian”, he says.

Concluding his homily, Pope Francis recalls Peter’s prayer in which he tells the Lord “Depart from me, for I am a sinful man, O Lord”, reminding the faithful of the importance of acknowledging our wrongs.