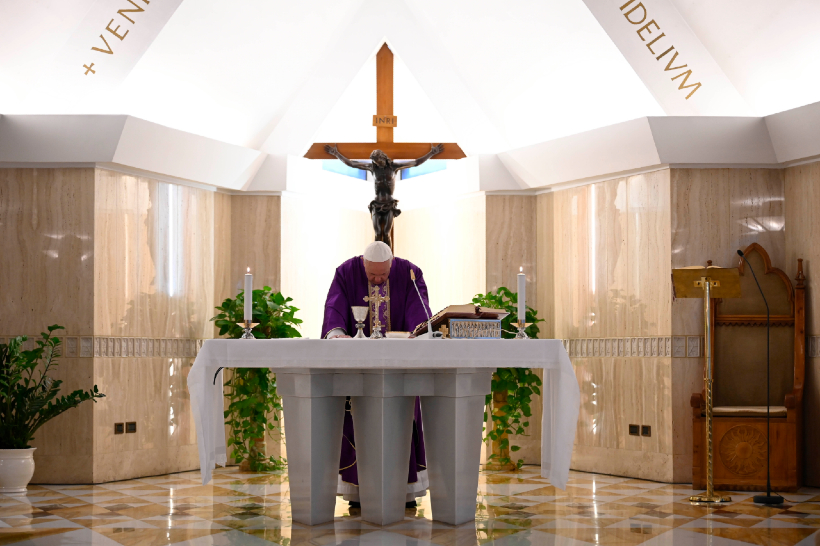 Civil authorities were the subject of Pope Francis’ prayer on Thursday morning during Mass at the Casa Santa Marta.

“We pray for those who govern, who must make decisions regarding the measures” to be taken to contain the Covid-19 coronavirus. May they “feel accompanied by the prayer of the people”, Pope Francis said at the beginning of the sacred liturgy he celebrated on Thursday at Casa Santa Marta. “Many times they make decisions that people don’t like but it’s for our good”.

Pope Francis described the rich man in Jesus’ parable as someone who was satisfied, happy, without any concerns. His clothes were probably made by the best fashion designers of his day. He may have had to take medication for high cholesterol due to the banquets he gave every day. His life was going along quite well.

The rich man knew that a poor man lived at his doorstep. He even knew his name was Lazarus. The problem is that Lazarus “didn’t matter”. He thought it was normal and that Lazarus would take care of himself. Both men died.

“The Gospel says that Lazarus ‘was taken to heaven with Abraham, to the bosom of Abraham’. Regarding the rich man, it says he ‘was buried’. Period.”

Pope Francis was impressed by the “great abyss” between the two.

“ ‘Between us, there is a great abyss. We can’t communicate. We can’t go from one side to the other’. It was the same abyss that had existed between the rich man and Lazarus while they were alive.”

The drama of indifference

Pope Francis described the rich man’s drama as being “very much informed”. That information, the Pope said, “never penetrated his heart. He wasn’t moved by the drama that others were living”. This is our drama too, he said.

“We all know because we’ve heard it on the television or we’ve read it in the newspapers: How many children suffer hunger today in the world, how many children don’t have the necessary medicines, how many children can’t go to school. We say, ‘poor things’ and continue on.… We know these things exist, but it doesn’t penetrate our hearts.”

The drama is that we are well-informed but that we do not “feel the reality” that others live. “This is the abyss, the abyss of indifference”, Pope Francis said. This indifference robs us even of our name, as in the case of the rich man, whose name we don’t know. It is egoism, the Pope said, that “makes us lose our real identity, our name”. This leads to a “culture of adjectives where your value is in what you have”.

“Indifference brings us to the point of losing our name…. We are this or that. We are adjectives.”

Pope Francis concluded with the prayer:

“We ask the Lord today for the grace of not falling into indifference. The grace that all the information we have about human suffering might penetrate our hearts and move us to do something for others.”