Pope: ‘The only way out of the current crisis is all together’

Pope: ‘The only way out of the current crisis is all together’ 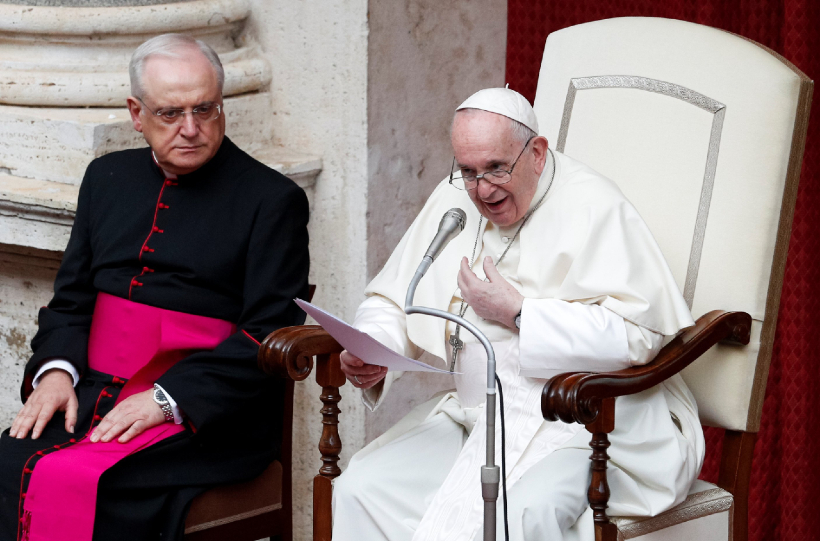 Speaking during the General Audience in the Vatican, Pope Francis looks to a post-pandemic world and reflects on the principle of subsidiarity, whereby every level of society has a role to play in revitalizing the social fabric.

Continuing in his series of catecheses on the effects of the Covid-19 pandemic in light of the Church’s teachings, Pope Francis said, “Every one of us is called to assume responsibility for his or her part,” and he highlighted the fact that we must look to the future working for a social order in which the dignity and the gifts of all of its members are respected.

Speaking during the weekly General Audience in the Vatican, the Pope reflected on the principle of subsidiarity.

From top to bottom and from bottom to top

To better explain its meaning, he recalled how after the great economic depression of 1929, Pope Pius XI explained that “this principle has a double movement: from top to bottom and from bottom to top.”

“To emerge better from a crisis, the principle of subsidiarity must be enacted, respecting the autonomy and the capacity to take initiative that everyone has, especially the least,” the Pope said elaborating on the fact that this principle “allows everyone to assume his or her own role for the healing and destiny of society.”

He decried the fact that many people are unable to participate in the reconstruction of the common good because they are marginalised, excluded or ignored.

“Certain social groups do not succeed in making a contribution because they are economically or socially suffocated. In some societies, many people are not free to express their own faith and their own values,” he said.

Elsewhere, he continued, “especially in the western world, many people repress their own ethical or religious convictions: This is no way to emerge from the crisis, or at least to emerge from it better.”

Pope Francis said that it is right that the highest levels of society, such as the State, should intervene to provide the necessary resources to progress. He noted that public institutions are trying to help through appropriate interventions; however, he continued, society’s leaders must respect and promote the intermediate or lower levels.

The decisive contribution of all

“The contribution of individuals, of families, of associations, of businesses, or every intermediary body, and even of the Church, is decisive,” he said.

The Pope said that we all need to assume responsibility in the process of healing the society of which he or she is a part, but the injustice of exclusion happens often “in those places where huge economic and geopolitical interests are concentrated.”

He recalled the reality in the Amazon region, for example, where he said the voices of the indigenous peoples, their culture and world visions are not taken into consideration.

The hegemony of large multinational companies

“Today, this lack of respect of the principle of subsidiarity has spread like a virus. Let’s think of the grand financial assistance measures enacted by States. The largest financial companies are listened to rather than the people or the ones who really move the economy,” he said.

He also turned his thoughts to the current race for a cure for the new coronavirus noting that “the large pharmaceutical companies are listened to more than the healthcare workers employed on the front lines in hospitals or in refugee camps. This is not a good path.”

Reflecting on St. Paul’s First Letter to the Corinthians, in which the apostle says that all the parts of the body are necessary and that those parts that may seem the weakest and least important, in reality, are the most necessary (1 Cor 12:22), Pope Francis said that only by implementing the principle of subsidiarity will we all be able to assume our role for the healing and destiny of society.

“Implementing it gives hope in a healthier and more just future. Let’s construct this future together, aspiring to greater things, broadening our horizons and ideals,” he said.

Pope Francis recalled previous catecheses in which solidarity was upheld as a way out of the crisis, but he pointed out “this path of solidarity needs subsidiarity. In fact, there is no true solidarity without social participation, without the contribution of intermediary bodies: families, associations, cooperatives, small businesses, and other expressions of society.”

During the lockdown, he recalled, the spontaneous gesture of applauding for doctors and nurses began as a sign of encouragement and hope.

Let’s extend this applause, he said, to every member of the social body, for their precious contribution, no matter how small. He also had special words of thanks and gratitude for the millions of volunteers who have given their all during the crisis.

“Let’s applaud the elderly, children, persons with disability, workers, all those who dedicate themselves to service,” he said. “But let’s not stop only at applauding.”

Pope Francis concluded by looking ahead, beyond the crisis, with the invitation to be hopeful:

“Hope is audacious,” he said. “Let’s encourage ourselves to dream big, seeking the ideals of justice and social love that are born of hope,” trying not to reconstruct an unjust and unhealthy past, but a future in which mutual enrichment allows the beauty and the wealth of smaller groups to flourish, and “where those who have more dedicate themselves to service and give more to those who have less.”