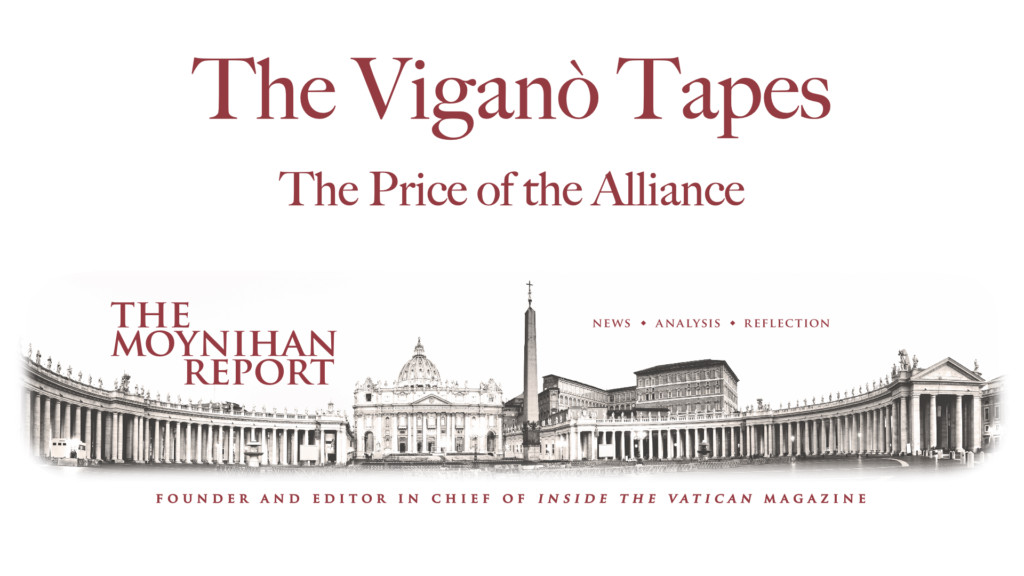 The Vigano Tapes
The Price of the Alliance
Question #3

3. What is the price that the church of Francis finds itself paying for its endorsement of the mainstream narrative?

The enslavement of the Holy See and all of its peripheral entities to the pandemic narration is the pretium sanguinis of a scandalous betrayal, which sees the ecclesiastical hierarchy – with some exceptions – completely integral to the globalist plan of the elite, and not only on the health issue but also and above all on what concerns the Great Reset and the entire ideological structure on which it is based. In order to do this, the hierarchy has had to apostasize doctrine, deny Christ, and dishonor His Church.

The Malthusian ecologism, irenicist ecumenism (that is a prelude to the constitution of the universal religion), the “fourth revolution” theorized by Klaus Schwab and the families of international finance, find in Bergoglio not a neutral spectator – which would itself already be an unheard of thing – but actually a zealous cooperator, who abuses his own moral authority in order to support ad extra [outside the Church] the project of the dissolution of traditional society, while ad intra [within the Church] he pursues the project of the demolition of the Church in order to replace Her with a philanthropic organization of Masonic inspiration. And it is scandalous, as well as a source of great sorrow, to see that in the face of this ruthless and cruel massacre the majority of Bishops are silent, or rather they align themselves obediently out of fear, self-interest or ideological blindness.

On the other hand, today’s Hierarchy comes from the conciliar school and has been formed and chosen in view of this evolution. In addition to the Episcopate, all of the Religious Orders, Universities, and Catholic institutions have been occupied since the Council by fifth columns that have formed generations of clergy, politicians, intellectuals, entrepreneurs, bankers, professors, and journalists, indoctrinating them into progressive ideology. And just as the Left has done in the political and cultural sphere, so within the Church the Innovators have ostracized any voice of dissent, driven out those who are not aligned, and expelled those who resist.

The persecution we are witnessing today is no different from that of decades past, but now it has been extended to the masses, while previously it focused on individuals and the ruling class. This applies to both the civil and ecclesiastical world – confirming the pactum sceleris [criminal conspiracy] between the deep state and the deep church. It seems to me that in this conspiracy the role of the Jesuits has been decisive, and it is no coincidence that for the first time in history a religious of the Society of Jesus is seated on the Throne of Peter, in violation of the Rule established by Saint Ignatius of Loyola.