Controversy around the Synod, and what it means 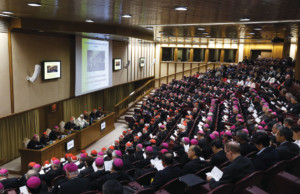 Pope Francis attends the morning session of the extraordinary Synod of Bishops on the Family at the Vatican October 18.

This Synod — which will continue in October 2015 — is extraordinary in more ways than one. It is “extra-ordinary” in the simple sense of being merely preparatory to the actual or ordinary Synod that will take place in 12 months’ time. But the Synod is also “extra-ordinary” in the more colloquial sense of the term. Cardinal Walter Kasper’s address to the February 2014 Consistory in preparation for the Synod set the agenda. It was widely publicized in various languages and actively promoted by the author in interviews and talks around the world. It expressed his life-long campaign to allow divorced and civilly remarried persons to receive Holy Communion in certain restricted circumstances. He has not come up with one convincing answer to the theological critique that has been made of his essentially casuistic position. The issue of remarried divorcees is a real pastoral problem in Western Eur­ope and North America but is not the only one, nor the most pressing one. And yet it became the focus of an intense pre-synodal debate, distracting attention from more central issues such as widespread cohabitation, child welfare, and pornography in the West, polygamy in Africa, or interreligious marriage in Asia. What is most strange is that the whole area of so-called artificial reproduction (IVF, surrogacy, etc.) never surfaced in any report.

Secondly, the lack of openness and transparency at the Synod is extraordinary. Unlike previous Synods, where summaries of each contributor’s paper were made available, and the full texts could be requested, total secrecy was imposed — apart from the (generally impressive) testimonies given by married couples at the opening of each session. The Bishops were informed that their own contributions were the property of the Synod, and so could not be made public. Instead, a “summary” of the day’s proceedings was presented by the Holy See’s press spokesman accompanied by select Cardinals and Bishops.

From the very outset, it became clear to this observer that we were only hearing one side of whatever discussion might have taken place.

Confirmation of the fact that the voice of those who opposed the proposed agenda was ignored or silenced was the secret ballot to elect the moderators of the smaller language group discussions. The majority of those elected were known op­ponents of Cardinal Kasper’s agenda: Cardinal Raymond Burke, for example, was the first to be elected. Their election evidently caught the organizers off guard — but they reacted quickly. Moderators would normally have the task of drawing up the official recommendations. But within days, Pope Francis unexpectedly appointed five other Bishops (three from Latin America) and one priest — the Jesuit Superior General — to write the final recommendations, thus bypassing the moderators.

The most extraordinary, and alarming, aspect of the Synod to date was the report on the first week’s discussions presented by Cardinal Peter Erdö on October 13. At the press conference presenting the report, Archbishop Bruno Forte stressed that those who drew up the report were “a team of heroes.” In other words, they had shown real courage.

What kind of courage?It turns out to be the courage to say what the world would like them to say in opposition to the opinion of a significant number of Bishops. This is hardly the courage which St. Paul advocated. As Joseph Ratzinger once wrote: “The apostle’s frankness consists of saying the truth in a world dominated by appearance, even though it involves him in conflict [with the world].” The content of the report caused widespread dismay — not to say a deep sense of betrayal — among faithful Catholics. 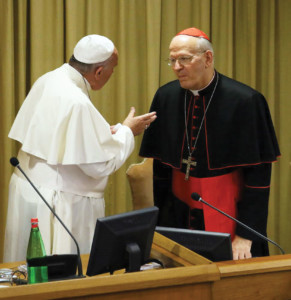 October 6, 2014, at the Vatican. Pope Francis with Hungarian Cardinal Peter Erdö, the General Secretary of the Synod.

“What rang out clearly in the Synod was the necessity for courageous pastoral choices,” the report claims. These choices were presented in terms of “the law of gradualness,” the only reference to the rich teaching of St. Pope John Paul II, otherwise ignored by the Synod. But it is used in a way that contradicts what he meant.

According to American theologian Father Dominic Legge, OP, some voices at the last Synod on the Family (1980) had claimed that, in difficult cases, one could commit to “gradually” relinquishing a gravely sinful practice (like contraception) and return immediately to the sacraments, even while intending to continue committing individual sinful acts in some (diminishing) measure. John Paul II clearly rejected this argument.  Married couples, he wrote, “cannot… look on the law as merely an ideal to be achieved in the future: they must consider it as a command of Christ the Lord to overcome difficulties with constancy. And so what is known as ‘the law of gradualness’ or step-by-step advance cannot be identified with ‘gradualness of the law,’ as if there were different degrees or forms of precept in God’s law for different individuals and situations.” (Familiaris Consortio no. 34) But the latter is what Cardinal Erdö’s report advocated.

There is nothing very courageous about offering “pastoral” recommendations that fail to challenge a world that still bears the scars of the sexual revolution of the 1960s. How courageous is it to stress only the positive aspects of so many tragic pastoral situations at the expense of the negative? How could it be courageous to unsettle profoundly those faithful Catholics who, to quote one layman, “are clinging to Christ’s teaching on marriage and chastity by their fingertips”? None of the recommendations could compare with the real moral courage demanded of any priest who, faithful to Church teaching, tries to lead sinners to the truth and so to God’s mercy and forgiveness — or preach in those terms.

It was gravely irresponsible on the part of the Synod to cause further confusion in a pastoral situation that, in the face of little authentic instruction on the part of bishops and priests over the past 40 years, is causing havoc in people’s lives. That havoc was reflected in the worldwide survey conducted by the Vatican in preparation for the Synod. In my opinion, that havoc is the direct result of the rejection of the Church’s teaching on sexuality in the wake of Humanae Vitae by most moral theologians and several Bishops’ Conferences. That teaching was referred to (ambiguously) at the conclusion of his report by Cardinal Erdö, as though it were an afterthought, while in truth it is the main bone of contention. All the pastoral problems in this area arise from the rejection of that teaching. The beatification of Pope Paul VI on October 19 will, hopefully, provoke a new appreciation of his courageous and prophetic teaching.

Of the many glaring omissions in the reports (e.g. chastity is not mentioned once), the most striking is the absence of any reference to holiness as the goal of all Church teaching and pastoral practice. Cardinal Erdö’s report does mention sanctity once — albeit in passing — but otherwise it is exclusively concerned with assuaging people’s feelings by showing sympathy to every possible irregular situation. This might help overcome the negative image of the Church’s teaching on sexuality, and as such would be welcome, were it not in fact scandalous, in the strict sense of leading people astray from God (cf. Mt 18:6). Sad to say, the Synod’s (now not-so-hidden) agenda feeds into a bigger agenda, which is that of a secular society that threatens the traditional family to its very foundations. Even that is secondary. What is at stake, ultimately, is the Church’s mission to guide people to union with God in Christ: holiness.

The day after the report was published, the topic chosen by the Peruvian Archbishop Salvador Pineiro Garcia-Calderon for his homily that morning was, significantly, holiness.It was a most timely intervention in what was, indeed, an extraordinary Synod.

Nota bene: After the above was written, Pope Francis added two members to a committee to write the final report of the Synod of Bishops. Apparently responding to complaints that the drafting committee was too homogenous in outlook and in geographical background, the Pope added an Australian and an African prelate: Archbishop Denis Hart of Melbourne, Australia, and Cardinal Wilfrid Napier of Durban, South Africa. Cardinal Napier was one of the Synod fathers who had been openly critical of the interim report on the Synod’s work. His appointment to the drafting committee helped to reassure participants that the final report would be a balanced representation of the views expressed in the Synod.