The “Diary” of the Secretary General of the Second Vatican Council

The “Diary” of the Secretary General of the Second Vatican Council

It is a volume of almost 600 pages published by the Libreria Editrice Vaticana (the Vatican Press): The Conciliar Diary of Msgr. Pericle Felici, General Secretary of the Second Vatican Council (LEV, 596 pp.), edited by Archbishop Agostino Marchetto. The book is an important help in understanding the history of the Second Vatican Council, as in its pages we see the Council through the eyes of a key Council figure, the Council’s Secretary General, Pericle Felici (1911-1982). Felici, who became a cardinal in 1967, had entrusted to his assistant Monsignor Carbone, in the event of his sudden death, his “secrets” (private papers). He had indicated the “hiding place” to Carbone: the bottom part of a kneeler. And, in fact, Carbone, after Felici’s death, found the papers there, and began to study their content. (Felici was for many years in charge of the Archive of the Second Vatican Council.) 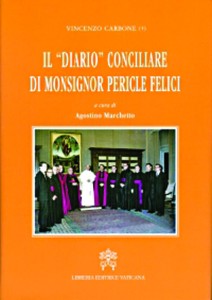 Archbishop Marchetto presented the work he edited in an interview in the newsletter of the Vatican Press. “If the author had not persevered, at the end of each day, in writing his diary, we would not have this interesting story of friendship with God in Christ, in the Holy Spirit, and at the same time Council events experienced from the inside, in a place of extraordinary service and with a vision of the whole.”

The book, bringing together the writings of the Secretary General of the Council, “allows us to know at last, 50 years after the close of the Council, a source I regard as decisive, even if not official, which acquires a very special, significant place among many diaries published up until now.”

Felici, notes Marchetto, played a key role in the Council. “The reading of his Diary confirms this key role, and arouses wonder at the vastness, industriousness, depth and delicacy of his commitment. Hence the importance of his role and his contribution to the solution of the issues, always according to the directions given by the Pope… I will recall only his proposal that the direction of the Council be entrusted to 4 or 5 cardinals, his stand in support of placing the questions of collegiality and the diaconate before the Fathers, with the destruction of the first schemas prepared by the moderators. Moreover, all his efforts on behalf of a collegiality that would not wound the primacy of the Successor of Peter.”

Moreover, “concerning the issue of the condemnation of communism, proposed by Msgr. Carli, it was the solution proposed by the General Secretary that was accepted by the Pope and by all. Also significant was Felici’s suggestion to Paul VI, on May 5, 1965, to “leave the governing bodies of the Council as they are; only the moderators should be told to really be such; they should not take a stand for this or that tendency, nor express personal opinions. And the Holy Father agrees; this is his thought.”

From the Diary, says Marchetto, “emerges clearly the satisfaction of Pope John for the preparatory work done by the Council Secretariat led by Msgr. Felici.”

Already on March 1, 1962, in fact, the Bishop of Rome had announced to Felici that he would be the Secretary General of the Council. However, all of the 1960 texts reveal a great understanding between the two and the kindness and fondness of the Supreme Pontiff for him. But the appointment was only made public at the same time as the Motu Proprio which announced the Council. Of note is the fact that the Supreme Pontiff on May 21, 1962, clearly expressed his will that the preparatory schemas, on which he would comment (July 25, 1962), should be pastoral. The Council’s opening date was decided on January 28, 1962, but indeed already on November 4, 1961, Pope John had mentioned the autumn of 1962. Felici thought in fact that there might need to be three sessions, while the Pope wanted just two, hoping that the closing of Vatican II might coincide with the celebration of the anniversary of the Council of Trent (1563).” 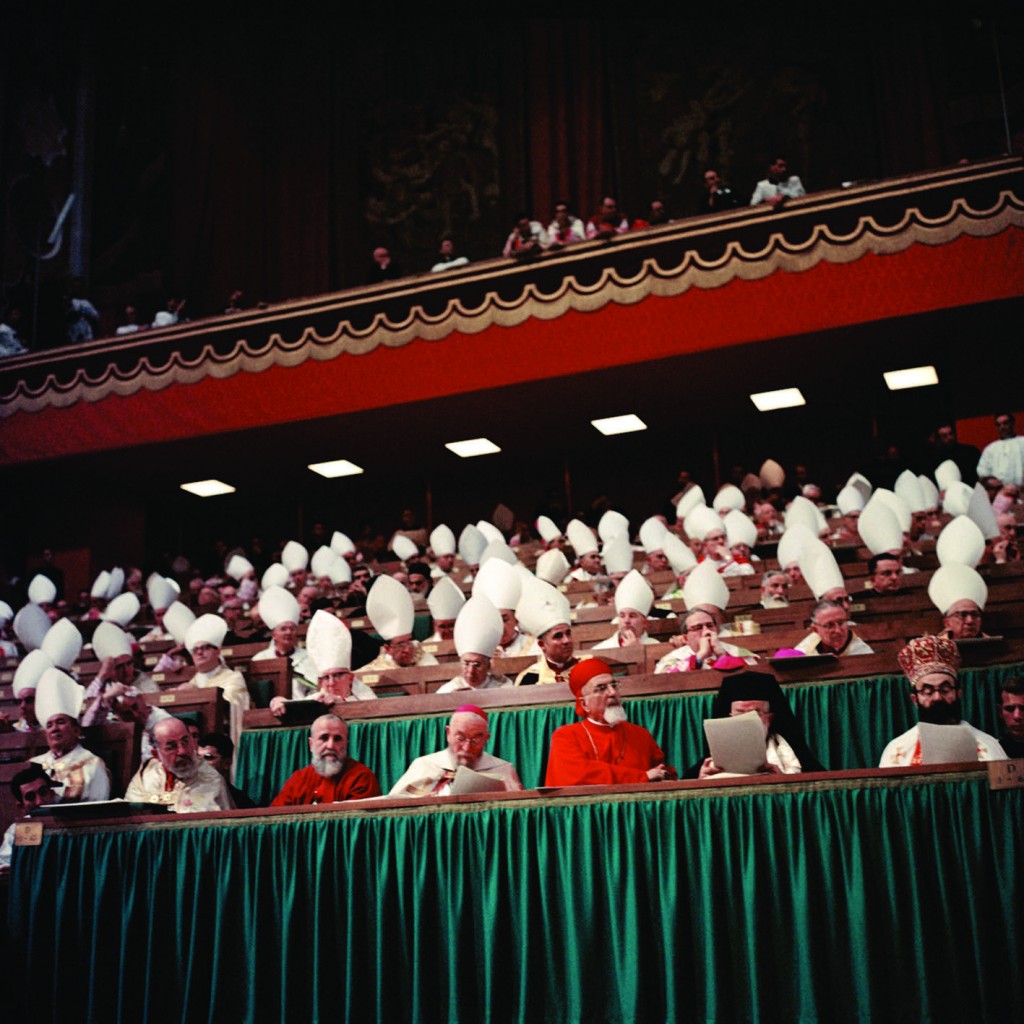 From reading the book, written by a curial prelate, as Felici was, a vision emerges of a Curia that is not idyllic, “for the Curia’s illnesses,”  says Marchetto, “are clear, the same illnesses as those indicated recently by Pope Francis. They are often mentioned, with pain, by Felici, that is, envy, jealousy, competition for places of ‘command,’ careerism in short. The difficulties were such that there arose in him even the temptation to step down (July 5, 1962). But the Pope told him, ‘For heaven’s sake no, do not even think about it.’ In this regard I might add another outburst that Felici entrusted to his diary regarding the accusation made against him that he was the accomplice or facilitator of the Roman Curia. ‘If they (his critics) only knew,’ he lamented to himself, ‘what I had to suffer for some of the Curia prelates!’ He added: ‘If the campaign [derogatory] continues, they could replace me and I would thank God for the change.’”

Finally, the Diary reveals Felici’s profound spirituality. “I might add, traditional spirituality,” says Marchetto, “with the adjective not taking anything away from the depth and authenticity of his spirituality, on the contrary. Felici often analyzes himself with regard to the temptation to pride. He expresses a firm purpose: ‘I want to live in humility: always subject to your will, accepting from this moment forward even death, when and how you want it, in a perfect act of love; working with all my strength wherever you want. Through the mouth of your Vicar you’ve assigned me my work; I will work as best I can.’” It should be kept in mind that all of these spiritual intentions were put to the test during the Council also because of health difficulties.

Was his spirituality “traditional”? He examines himself (June 21, 1964), noting almost with detachment: “Sometimes I wonder how it could have fallen to me the become the Secretary of the Ecumenical Council. Partly due to my character, partly due to my training, partly due to having exercised my ministry according to certain guidelines, I find myself sharing in doctrine and practice a number of positions which have come to be called ‘traditional,’ all the while looking with serenity — so it seems to me — on openings which can improve the spirits and make them more adapted to the spread of the true and the good.”

In any case, the Secretary General is aware that he had “spoken very frankly with all, with the Pope first of all, who I think greatly appreciated my attitude, which certainly cannot result in anything but nervous tension, discomfort and hostility” (April 12, 1963).

However it is a certain fact that Paul VI entrusted him with more and more serious tasks. He becomes, therefore, the man on the cross.

A final point to be noted: the pastoral concern of Msgr. Felici, though he makes clear his deep commitment to doctrine. He wrote: “Above all, I think I am here on earth not to sleep, but, with a wide and intelligent negotiation, deploy the treasures that the Lord has entrusted to me. The thought of hell is healthy; I must often meditate on it, and preach it” (June 10, 1960).

“And now? What is left to say?” Marchetto writes. “Fifty years later, we can legitimately ask ourselves: how would we be without the compass of the Council in the perilous seas of ​​the beginning of the third millennium? From this thought arises our grateful love for the Second Vatican Council, the real one, the Council of the Fathers.”

(This review by Andrea Tornielli was originally published on October 7 on the Vatican Insider website in Italian; translation by Rob­ert Moynihan.)

At a recent press conference at the Vatican, a new online digital library was launched, offering access to over a thousand papal documents on communications from the first to the twenty-first century.

The project is named after Jesuit Father Enrico Baragli, who died in 2001 and was in the forefront of research into the way the Catholic Church has communicated its message over the centuries. It is being promoted by the Pontifical Council for Social Communications, together with the Faculty of Social Communication at the Pontifical Salesian University, as well as the Vatican Publishing House and Vatican.va website. 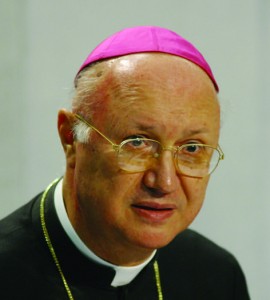 The primary function of the PCCS, in accordance with the mandate given to it by Vatican II, is to promote the importance of communications in the life of the Church.  Communication is not just another activity of the Church but is at the very essence of its life. The communication of the Good News of God’s love for all people, as expressed in the life, death and resurrection of Jesus Christ, is what unifies and makes sense of all the other aspects of the life of the Church.  This project is particularly valuable because it brings together, and makes available to a wider public, a long tradition of teaching and reflection by the Church precisely on the centrality of communications. 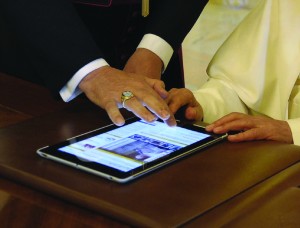 Archbishop Claudio Celli, president of the Pontifical Council for Social Communications, assists Pope Benedict XVI with the new Vatican news portal on an iPad at the Vatican June 28

The materials themselves are hugely significant as they show how the Church has, throughout its history, sought to engage with the changing means and forms of communication which have shaped culture and human society. This collection enables us to appreciate how the Church’s manner and means of expressing its message have been transformed over the years in order to take account of changes and developments in the dominant forms and technologies of mass communication.

It is interesting to see how the Church has adapted its understanding of how best to communicate as a predominantly oral culture yielded to one where the written word prevailed; as the world of manuscripts was transformed by the invention of the printing press; and as a world of mass communications developed progressively with the emergence of newspapers, radio, cinema, TV and, more recently, digital media and social networks.

What one sees is a constant effort on the part of the Church to ensure that the Good News of the Gospel is made known to its contemporaries in ways that are culturally appropriate and that fully realize the potentials of new models of communications and developing technologies. (Vatican Radio)