Germany is home to 38 sites on the UNESCO World Heritage List. Since 1985, two of them, the Ottonian Romanesque St. Michael’s Church, built between 1010 and 1020 by Bishop Bernward, and St. Mary’s Cathedral and its extraordinary medieval treasury of more than 2,000 artifacts (many of which were also accumulated by Bishop Bernward), have been located in Hildesheim, one of the oldest cities in northern Germany, about 20 miles southeast of Hannover. 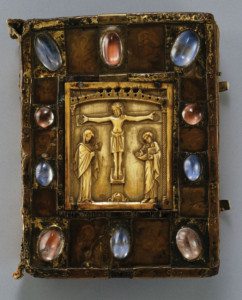 The cathedral’s website, www.domsanierung.de, includes a chronological overview of its architecture. “In 815, the Emperor Louis the Pious [Charlemagne’s son] founds the diocese of Hildesheim… and has a small church erected on the cathedral hill. Around 820, Gunthar, the first bishop of Hil­desheim, erects a cathedral church to the south of the imperial chapel for the canonical hour as part of the divine office of the cathedral. From 852 to 872… Bishop Altifrid orders the construction of a new cathedral to be erected on top of the imperial chapel and along its western extension. Around 963, south of the cathedral, Bishop Othwin erects a chapel to honor St. Epiphanius of Pavia (438-496) and brings the saint’s remains to Hildesheim. Around 1015 Bishop Bernward decorates the cathedral with works of art. For the bronze ‘Bernward-doors’ he commissions the reconstruction of the western crypt as well as erects a new main west portal… In 1046, a major fire in Hildesheim causes major damage to the cathedral… In 1061, Bishop Hezilo consecrates a new cathedral on the foundation walls of the earlier Altifrid Cathedral.”

From then on, at various different times, several chapels, extensions, the double tower façade and interior decoration were added to the cathedral until March 22, 1945, when it was almost completely destroyed by the Allies’ bombardments. For although this historic city was of little military significance, two months before the end of the war in Europe, as part of the Area Bombing Directive to undermine the morale of the German people, 28.5% of Hildesheim’s buildings were completely destroyed and 44.7% damaged. 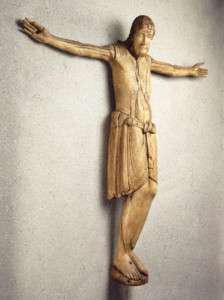 In 1960, Bishop Heinrich Maria Jans­sen consecrated an exact replica of the medieval cathedral. However, 50 years later, on January 10, 2010, it was closed for restoration and is scheduled to reopen on August 15, 2014.

During this time several artifacts from its treasury, one of the most complete surviving ensembles of ecclesiastical furnishings and treasures, almost all of which date to between 1000 and 1250, are in safekeeping and displayed in several museums in Germany: Attenburg’s Lindenau Museum, Augsburg’s Diözesan-Museum, Bonn’s LVR-Landesmuseum, Hannover’s NDS Landesmuseum, Lengo’s Weserrenaissance Museum, and Würzburg’s Museum am Dom. From November 11, 2012 to September 8, 2013, four of its treasures bearing witness to the relationship between Western Europe and the Byzantine Empire in the Middle Ages were on display in Chicago’s Institute of Art: The Smaller Gospelbook of Bishop Bernward, two ivory plaques, and a reliquary pendant.

According to the website of the German Missions in the United States: “The Smaller Gospelbook of Bishop Bernward emphasizes the high regard with which patrons in medieval Europe viewed the products of Constantinople’s artistic workshops. The Gospelbook was already 100 years old when it came into the possession of Bishop Bernward of Hildesheim (r. 993-1022). At his command, new front and back covers were added to it. A Byzantine carved ivory plaque with an image of the Crucifixion serves as the centerpiece for the front cover. Originally, this ivory plaque would have been the central panel of a small, devotional triptych. Bernward would have surely appreciated the plaque’s value as an exotic work of art from Byzantium. It is tempting to think that he obtained the ivory plaque while serving as tutor to the future Emperor Otto III, whose mother was the Byzantine Princess Theophano, a relative of John I Tzimiskes (r. 969-976); however, the Ottonians were linked to the Byzantine Empire through many other ambassadorial and mercantile associations, so the plaque may have come to Hildesheim by any number of means. Following Bernward’s canonization in the twelfth century, more alterations were made to the front cover, including a new, bejeweled frame befitting the new saint, Bernward,” (his feast day is celebrated on November 20). 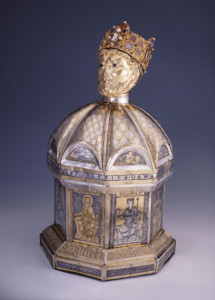 Bishop Bernward’s Smaller Gospelbook is again on display at New York’s Metropolitan in a breathtaking one-room exhibit of 50 artifacts — the most special of all Hildesheim’s treasures — “Medieval Treasures from Hildesheim,” on through January 5. So is a variety of other richly-decorated liturgical items commissioned by Bern­ward, who was born an aristocrat in Saxony in 960. Again, according to the German Missions’ website, he “was not only a religious leader, but a man of letters, having completed an extensive course of studies in the arts and sciences in Mainz before taking up his crozier in Hildesheim in 993. Hildesheim was one of the largest cities in northern Germany at the time and strategically situated on the Hellweg, one of the region’s most important trading routes. Bernward took full advantage of Hildesheim’s position and prosperity and commissioned numerous works to decorate the new St. Michael’s Church,” where he was later buried in the crypt. It soon became a pilgrimage destination and was fully accepted as such by the Church 200 years later, in August 1194. The most famous result of Bernward’s artistic patronage in Hildesheim is the set of massive cast bronze doors, which depict the biblical account of mankind’s fall and salvation in remarkable detail. The doors and his famous bronze-cast Bernward’s or Christ’s Column, depicting 28 scenes from Christ’s life, could not travel to New York, but the exhibition features several other examples of medieval metalwork, most of which have never left Europe before. This is actually the first occasion that such an impressive collection of 11th-century works of art has ever been seen in North America.

One of the greatest patrons of the arts in the Middle Ages, Bernward seems to have spared no expense in gathering exotic materials for the cathedral and in collecting finished works of art from nearby when the opportunity arose. The first part of the Met’s exhibit focuses primarily on his legacy: the “Golden Madonna,” a silver crucifix, a pair of richly-decorated silver candlesticks, and several sumptuously-illuminated manuscripts. The monumental life-size lindenwood and oak Ringelheim Crucifix is one of the earliest surviving three-dimensional sculptures of the Middle Ages. 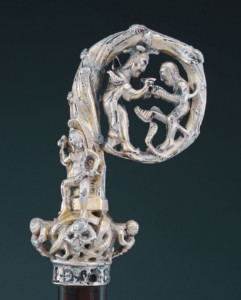 “Medieval Treasures from Hildesheim” also examines the continuing artistic production in Hildesheim during the High Middle Ages: opulent jeweled crosses, chalices, reliquaries, and portable altars decorated with enamel and ivory. The Met’s press release explains that “the late 12th-century crystal reliquary created to house the skull of the martyred Saint Oswald, surmounted by a silver-gilt bust of the saint and decorated with finely-drawn niello plaques is a highlight, as are the three gilt-bronze liturgical fans with openwork decoration and cabochon stones, each over 16 inches in diameter.”

In the early 13th century Hildesheim re-emerged as a major center for bronze casting. The cathedral’s monumental six-foot tall cast bronze baptismal font, which dates to 1226, is the centerpiece of a group of objects which include a cast bronze eagle lectern, a lion acquamanile, and a crozier. Like the doors, the font, which is one of the most important works to survive from the Middle Ages, depicts biblical scenes. According to the press release, “the basin and its lid rest on free-standing kneeling figures of the four Rivers of Paradise… Richly decorated in relief, the basin depicts the Baptism of Christ and the Virgin Enthroned, flanked by scenes from the Hebrew Bible that were understood in the Mid­dle Ages to prefigure the Baptism of Christ.”

The fully illustrated exhibition catalog ($24.95 hardcover) is the first comprehensive overview of the Hildesheim medieval treasure in English. After the Metropolitan, in early 2014 this exhibition will travel to the Musée National du Moyen Âge (National Museum of the Middle Ages) in Paris. In 2015 (still no exact date) all the artifacts on loan will return home to Hildesheim to be displayed in a brand new cathedral museum still under construction.

Epilogue: Climbing the outer wall of St. Mary Cathedral’s apse is a 1,000-year-old rose tree, which represents the prosperity of Hildesheim. According to legend it dates back to the founding of the diocese. Louis the Pious is said to have found a valuable reliquary, which he’d lost while hunting, among its blossoms, so he ordered the construction of a chapel then and there in honor of his grandmother. Also according to legend, as long as it blooms, Hildesheim will never decline. This may explain why eight weeks after bombs destroyed the cathedral and badly burnt the rose tree in 1945, 25 new shoots appeared from a root buried by the debris.

Although the cathedral is closed until next year, it’s possible to visit the rose tree. It usually blooms at the end of May, and the flowers last approximately 14 days.