Father Lombardi to be awarded Honorary Degree by Pontifical University

The Head of the Vatican Press Office, Father Federico Lombardi, is to be award­ed an Honorary Doctorate (Honoris Causa) by the Faculty of Social Communications Science at the Pontifical Salesian University in Rome. The award comes as the university is celebrating the 25th anniversary of its foundation with a conference entitled “Rethinking Communications: Theories, Techniques and Teaching.”

The university said it wishes to honor Father Lombardi for his key role in the field of social communications of the Catholic Church over the past quarter of a century, saying he has always displayed great competence, dedication, equilibrium and love for the Church, even in its most delicate moments such as following the resignation of Pope Benedict XVI or during the conclave which elected Pope Francis.

In addition to being Director of the Holy See’s Press Office, Father Lombardi is also the Pope’s spokesperson and Director General of Vatican Radio.

Archbishop Gallagher: A priest and a diplomat 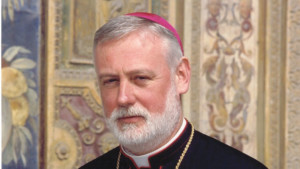 Pope Francis has appointed Liverpool, England native Archbishop Paul Gallagher to the post of Secretary for Relations with States, thus making him the first native English speaker to hold the position that is to all intents and purposes the Vatican’s Foreign Minister.

In an interview with Vatican Radio’s Emer McCarthy, Archbishop Gallagher says he is “honored and humbled” that the Holy Father chose him, but at the same time “inevitably a little fearful” at taking on such major responsibilities.

These responsibilities include overseeing the Second Section of the Secretariat, which has the specific duty of attending to matters which involve civil governments and international organisms. Archbishop Gallagher will work directly under the presidency of Secretary of State Cardinal Pietro Parolin.

Traditionally the Secretaries for Relations with States are chosen from the Holy See’s diplomatic corps, drawing from their experience as papal representatives to nations around the world.

In this, Archbishop Gallagher is uniquely placed. In a ministry that has spanned 30 years, he has served in Nunciatures in Tanzania, Uruguay and the Philippines and as Nuncio to Burundi, Guatemala and most recently Australia.

In fact, Archbishop Gallagher credits the “many people I have worked with, the Nuncios who I served with years ago” as having inspired him in his life. “Obviously,” he says, “when I went to Burundi in 2004, I followed Archbishop Michael Courtney who had been assassinated. To follow a man who had made the ultimate sacrifice, that indeed was very significant.” The Archbishop continued: “As you work around the world in the Nunciatures — whether it’s as a priest or a Nuncio — you see a microcosm of these problems that the world is facing [and that they] are interrelated. Certainly right now we have an enormous problem in terms of the development of peoples and societies, their aspirations, where they are going. We have a number of conflicts that are emerging because of poverty and under- development. The world is becoming increasingly polarized and therefore they feel that their ambitions are thwarted and this therefore leads people into desperate situations.”

Archbishop Gallagher has also served as an Observer at the European Parliament. Moreover he has Curia experience, having worked in its Second Section from 1995 to 2000 at the same time as the present Secretary of State Cardinal Parolin.

“I’m not sure that I go along with the idea that to be a papal diplomat is a vocation because I think that you have to jealously preserve your priestly vocation in the midst of this if you are going to do something really positive,” he said. “But certainly it’s a calling within the Church that is extremely valid and can make a great contribution both to the Church in terms of communications, representations, explaining the local Church to Rome and explaining Rome to the local Church, as I frequently say.” This, Archbishop Gallagher concludes, is a question of building on the rich history of the Church in the diplomatic field: “My experience is that there is very little hostility towards the Holy See as an entity, rather they do see a value in it. We work to make a contribution that is obviously grounded in our faith but also in the experience and history of our Church.

Pope Francis has added Cardinal Wilfrid Fox Napier of Durban, South Africa to the list of Delegate Presidents at next year’s Synod of Bishops. The XIV General Assembly of the Ordinary Synod of Bishops will take place from October 4-25, 2015. The theme they will reflect on is “The vocation and the mission of the family in the Church and in the contemporary world.”

The Holy Father confirmed the Delegate Presidents who served at the Extraordinary Synod, including Cardinals André Vingt-Trois of Paris, Luis Antonio Tagle of Manila, and Raymundo Damasceno Assis of Aparecida.

Cardinal Napier played an active role during the Extraordinary Synod last month. He was on the committee that drafted the final Relatio Synodi. At a press conference on October 14, Cardinal Napier expressed his hope that at the 2015 Synod, “we’ll be building on positives, not just negatives, the positives we’ve developed. We will have set the stage.” In an interview with Zenit last month, the South African prelate hoped that family prayer would provide a positive development for families at the next Synod. “We would like to see family prayer become once again the central activity of the family’s day. We are trying to inspire family movements, associations and sodalities to become active in promoting Catholic family life and spirituality,” he said.

The President of the Vatican Observatory Foundation, Jesuit Brother Guy Consolmagno, was presented in November with the Carl Sagan Medal by the American Astronomical Society (AAS).

He received the award at the 46th annual meeting of the Division for Planetary Sciences in Tucson, Arizona.

Carl Sagan was an American astronomer, cosmologist, astrophysicist and science commentator in astronomy and other natural sciences.

Speaking to Lydia O’Kane on receiving the medal, Brother Consolmagno said, “First of all to have recognition of your peers is really amazing… but in addition I had met Carl Sagan when I was a young man and seen his enthusiasm… that changed everything for all of us because he showed us that it’s a good thing to show your enthusiasm…”

The Vatican Advanced Technology Telescope, operated by the Vatican Observatory, is located in southeastern Arizona’s Pinaleno Mountains near Mount Graham.

Three top religious leaders in Central African Republic have received an award for their tireless work in promoting peace in the country. Catholic Archbishop Dieudonné Nzapalainga of Bangui, Imam Oumar Kobine Layama, President of the Central African Islamic Community, and Nicolas Guérékoyame-Gbangou, President of the Evangelical Alliance of the Central African Republic are the founders of the “Platform of Religious for Peace” in their country. They were among five groups selected by the US non-governmental organization Search For Common Ground for their commitment to the promotion of peaceful coexistence between Christians and Muslims. The three religious leaders worked tirelessly to prevent the conflict in CAR from degenerating into an all-out war between Christians and Muslims. “It is an award given to people who in the midst of violence have managed to give an alternative message, that of love, tolerance, social cohesion, of living together,” Archbishop Dieudonné Nzapalainga told the Fides news agency. For their efforts, Time magazine named them among the 100 Most Influential People in the World in 2014. 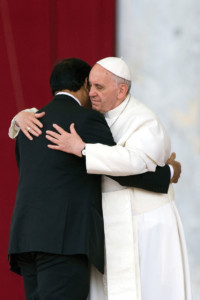 Meeting in the Vatican with a delegation from the World Evangelical Alliance (WEA) and its partner “First Step Forum,” Pope Francis has been awarded the annual Shahbaz Bhatti Freedom Award for his tireless commitment to build a more peaceful and reconciled world.

Vatican Radio’s Linda Bordoni spoke to WEA President Dr. Geoff Tunnicliffe, who explained the main reason for the meeting was to talk about areas of potential collaboration and to address global issues of common concerns to both the evangelical community and the Catholic Church.

Tunnicliffe begins by explaining exactly what he means when speaking of a “New Era in Evangelical and Roman Catholic Relations” — which by the way, happens to be the very title of the speech with which he addressed Pope Francis…

“We are an association of 600 million Christians, but made up of 129 national organizations and regions, and really that was a reflection of current reality because what we are seeing around the world is that in more and more countries, Catholic communities, Catholic bishops’ conferences are working much more closely with the Evangelical community on issues of deep concern and many of the social issues that we face,” he says.

Dr. Tunnicliffe says Pope Francis is contributing to this new momentum but he says it really goes back further and points out that he had the opportunity to speak at the Synod on Evangelization under Pope Benedict, “but I think it has been growing because our societies are recognizing there are some sharp differences in our cultures and the voices of Christian values that need to be heard are represented in the Catholic Church but also in the Evangelicals.” Dr. Tunnicliffe speaks of the urgent need to work together on some very specific areas of common concern, “issues that impact humanity that we must come together around.” And he points to the most pressing at the moment as being the situation in the Middle East and what could become the eradication of Christianity there. He speaks of the “Cradle of Christianity” campaign that aims to help Christians fleeing persecution in those regions, of the need to respond to the scourge of human trafficking, of the commitment needed to halt the risk of the proliferation of nuclear arms. “This is one of those moments in history in which we must all come together on behalf of those who are suffering,” he says.