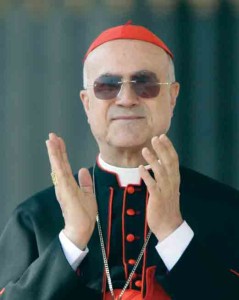 On November 7, at Pope Benedict’s general audience, some 7,000 Polish pilgrims were part of the crowd. The pilgrims came to thank the Lord for 20 years of RADIO MARIA’s activities in Poland.

The pilgrims attended a Mass near St. Peter’s tomb celebrated by the Pope’s secretary of state, Cardinal TARCISIO BER­TONE, and by Cardinal ZENON GROCHOLEWSKI, prefect of the Congregation for Catholic Education.

More than a dozen bishops from Poland were present, including Archbishop Waclaw Depo of Częstochowa, president of the Polish bishops’ Commission for Social Communications.

Cardinal Bertone said such pilgrimages “are a special expression of personal and communal faith, a witness to the love of God and to charity towards one’s neighbor, and a sign of hope that life’s journey finds its goal by allowing oneself to be guided by the merciful hands of the Heavenly

Father.” Faith is above all “a personal encounter with Jesus Christ, the way, the truth and the life,” the cardinal said, stressing that in the modern-day world, radio and television are important tools for the New Evangelization.

The Italian cardinal also took the opportunity to thank God for the 20 years of service that Radio Maria in Poland has offered.

“The Lord knows how much good has been sown in the hearts of listeners through common prayer, the proclamation of the Gospel, catechesis, information on the life of the Church and the live broadcast of papal celebrations and travels,” Cardinal Bertone said.

Father Tadeusz Rydzyk, founder and director of Radio Maria in his country, said the Poles came as pilgrims with the hope that their presence would bring light to the fact that free speech is under threat in Poland, and that eminent Catholics who refuse to bow to the dictatorship of “political correctness” and to the dominant mentality of relativism are being discriminated against.

Francesco De Pasquale, since June 2011 the director of the Vatican’s Financial Information Authority (FIA), has been promoted to the FIA’s Board. Rene Bruelhart has been appointed the new director in his place. De Pasquale, a lawyer, spent 20 years dealing with anti-money laundering legislation in Italy. He is also a former Bank of Italy official.

The president of the Authority’s board is the Italian Cardinal Attilio Nicora, 75. Nicora was president of the Administration of the Patrimony of the Apostolic See (APSA) until on January 19, 2011, the Pope named him to head the board of the newly-created FIA. The FIA is charged with monitoring the monetary activities of the Governorate of Vatican City State, the Vatican Bank, APSA, and the Congregation for the Evangelization of Peoples, but also smaller agencies such as the Vatican Pharmacy, the Vatican Supermarket, and the Vatican Museums. Also on the board: Prof. Marcello Condemi, professor of economic law at Rome’s Marconi University; Prof. Giuseppe Dalla Torre, rector of Rome’s LUMSA University; Prof. Claudio Bianchi, professor of accounting at Rome’s La Sapienza University; and Dr. Cesare Testa, head of the Italian Church’s department that manages funds to pay the salaries of priests in Italy. Bruelhart, former director of the Financial Intelligence Unit (FIU) of Liechtenstein and vice-president of the Egmont Group, the international network of FIUs, has been an adviser to the Holy See and Vatican City since September in matters relating to ending any possibility of money laundering or financing of terrorism.

Benedict XVI also named the secretary of the papal commission Ecclesia Dei, Monsignor GUIDO POZZO, 60, to become his almoner and promoted him to archbishop. Pozzo succeedes the Spanish Bishop de Blanco Prieto, 75, who has retired. The “Almoner to His Holiness” is an office directly under the Pope and cares for the Pope’s charitable giving.