A Prisoner for the Lord

A Prisoner for the Lord

“Therefore I, a prisoner for the Lord, entreat you to walk in a manner worthy of the calling with which you have been called, with all humility…” —Ephesians 4:1-2 (the verses were the subject of a meditation by Pope Benedict in the presence of the priests of Rome on Thursday, February 23, the day after Ash Wednesday) 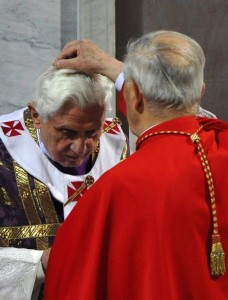 Pope Benedict XVI receives ashes
sprinkled on his head from retired Cardinal Josef Tomko during Ash Wednesda­y Mass at the Basilica of Santa Sabina in Rome February 22. Receiving ashes at the
beginning of Lent is a call to repentance and humility and a sign that believers know that death will not have the final word in their lives, Pope Benedict said. (CNS photo/Alberto Pizzoli, pool via Reuters)

Sitting behind a table and speaking without a prepared text, Pope Benedict XVI on February 23, addressing the priests of Rome (and, by extension, all Catholic priests) as “my clergy,” led Rome’s clergy in a reflection on faith, truth, hope and humility. The Pope used St. Paul’s Letter to the Ephesians, Chapter 4, verses 1-16, as a framework for reflecting on the problems facing the Church today and always, and on the way priests should respond to them.

The Pope used the pronoun “we” throughout his speech. What he said to priests, then, he was also saying to himself, at a time when he faces great challenges on many fronts.

The Pope did not ignore the difficulties of being a priest today. But the difficulties should not lead us to falter, he said. “We” must strive to live as St. Paul admonished the Ephesians, “with all humility and gentleness, with patience, bearing with one another through love,” he said.

“The great suffering of the Church today in Europe and the West is the lack of priestly vocations,” Benedict said. “But the Lord is al­ways calling; what is lacking is the listening. We have listened to his voice, and we must always be attentive to the Lord calling others, helping them to listen and to accept the call.”

He added: “The little humiliations we endure day by day are salubrious” because they help each of us maintain a balance between knowing each of us is unique and yet just one of the billions of unique creatures God formed and called. “To accept this, to learn this and accept my position in the Church” means to recognize “my little service as something great in the eyes of God,” he said.

And then he made his chief point: “The absence of humility destroys unity.” The lack of humility feeds pride, competition, a search for power and the denial of the gifts of others, he said.

The Pope showed his own sense of humility by receiving ashes at the beginning of Lent at an Ash Wednesday Mass on February 22, the day before he met with the priests.

During the Mass, the Pope received ashes on his head from retired Slovakian Cardinal Jozef Tomko, the cardinal-priest of Santa Sabina, where the Ash Wednesday Mass is held each year.

Before receiving and then distributing ashes, Pope Benedict gave a homily focused on the meaning of ashes and of the admonition from the Book of Genesis, “Thou art dust and unto dust thou shalt return.”

Ashes, he said, recall both the fact that God created human beings out of the dust of the earth and breathed divine life into them, but also that, after Adam and Eve sinned, God cursed the ground and made it bring forth thistles and thorns. With their sin, “the dust of the earth no longer recalls the creative gesture of God, completely open to life, but becomes a sign of the inescapable destiny of death,” he said.

The Pope then cited an “ancient commentary” which, he said, “summarizes this beautifully”: “Adam was created pure by God to serve Him. All creatures were created for the service of man. He was destined to be lord and king over all creatures. But when he embraced evil he did so by listening to something outside of himself. This penetrated his heart and took over his whole being. Thus, ensnared by evil, Creation, which had assisted and served him, was ensnared together with him.”

Yet, “along with the just punishment (of death),” the Pope said, God also “intends to an­nounce a path of salvation that passes precisely through the earth, through that dust, that flesh” taken on by Jesus and given up on the cross for the sins of all.

Distributing ashes is “an invitation to repentance, to humility, to remembering one’s own moral condition, not in order to end up in desperation, but in order to welcome — precisely in our mortality — the unimaginable nearness of God,” the Pope said.

While all men and women will die, God “opens the passage to the resurrection (and) to paradise finally rediscovered,” he said.

God sent his Son “to our earth devastated by sin” so that “we, prodigal sons and daughters, could return repentant and redeemed by his mercy to our true homeland” in heaven, Benedict said.

He added, citing the great controversial third century Church Father, Origen of Alexandria: “There is a text by Origen that says: ‘That which was flesh, earth, dust, and was destroyed by death and returned to dust and ashes, is made to rise again from the earth. According to the merits of the soul that inhabits the body, the person advances towards the glory of a spiritual body.”

“The merits of the soul about which Origen speaks are important,” Benedict continued, “but more important are the merits of Christ, the efficacy of his Paschal Mystery. St. Paul gives us a good summary in the second reading: ‘For our sake God made the sinless one into sin so that in him we might become the goodness of God.’ For us to enjoy divine forgiveness depends essentially on the fact that God himself, in the person of his Son, wanted to share in our human condition, but not in the corruption of sin. The Father resurrected him through the power of his Holy Spirit, and Jesus, the new Adam, became the spirit who gives us life, the first fruits of the new creation.”