“Freedom is the power, rooted in reason and will, to act or not to act… to perform deliberate actions on one’s own responsibility. Human freedom… attains its perfection when directed toward God, our beatitude… The more one does what is good, the freer one becomes. There is no true freedom except in the service of what is good and just.” —The Catechism of the Catholic Church, 1731, 1733

What does a Pope do? That is what Fidel Castro wanted to know when he met Pope Bene­dict on March 28 at the end of Benedict’s historic journey to Mexico and Cuba.

Pope Benedict will be 85 on April 16. Cuban revolutionary leader Fidel Castro is already 85, so he is just a bit older than the Pope. When they met, the two joked about their age and the hardships of being old men, and then Castro popped the question: So what do you do?

Castro, with Che Guevara alongside him, led a 1959 revolution and transformed the Caribbean island into a communist state, ruling it for 49 years before stepping down due to poor health in 2008. Under his rule, Cuba for years called itself an atheist state. But relations with the Church have improved over the past two decades.

Castro arrived for his meeting with the Pope in a green Mercedes SUV amid heavy security. He was helped out by two assistants, who supported him as he walked slowly up the steps into the stately white Vatican nunciature in Cuba, where Benedict had stayed the previous night, and where Pope John Paul II stayed during his landmark 1998 visit to Cuba.

“What does a Pope do?” Castro asked Benedict.

He carries out his ministry, Benedict told him. He serves the Church. He travels to visit and encourage the faithful.

He told Fidel that he was happy to be in Cuba, happy with the warm welcome he had received.

Dressed in a dark Reebok track suit and wearing a scarf despite the searing heat outside, Castro told the pontiff he had watched his whole visit on television. Two of his children were also presented to the Pope.

Castro handed the reins of power to his younger brother, President Raul Castro, four years ago and he has since largely retired from government, but he still writes columns and meets with visiting leaders. He told the pontiff he was spending most of his time reading and reflecting on the state of the world. 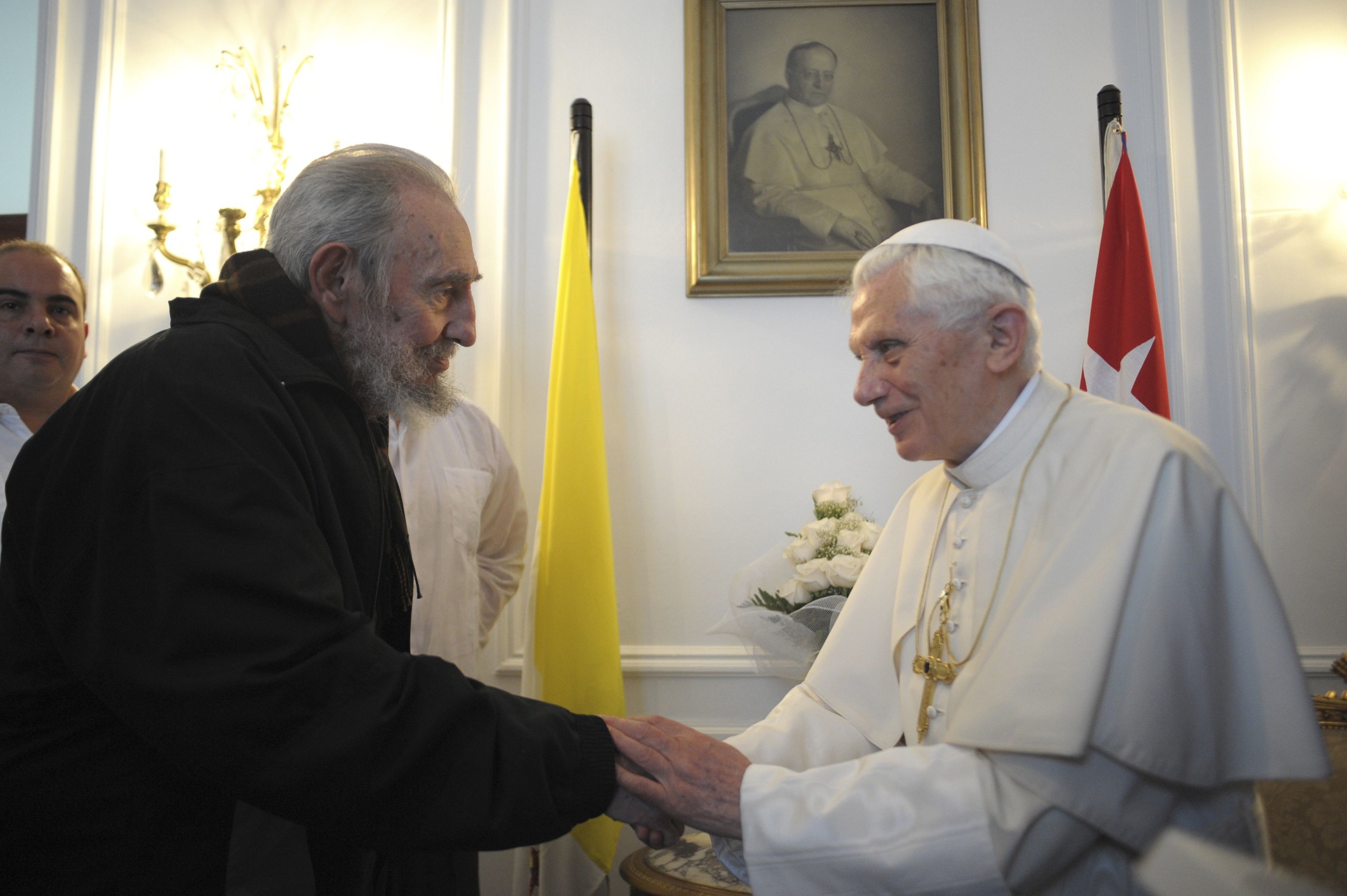 His columns are posted on the internet and read aloud on state television. The themes: his fears of impending Armageddon, the evils of consumerism, and his criticisms of arch ideological foe, the United States.

Castro questioned Benedict in particular about the changes in the Church’s liturgy, and he asked the Pope to send him a book to help him reflect. The Pope said he would think about which one to send. (He had not yet decided on the book he would choose, his spokesman, Father Federico Lombardi, S.J., said.)

The two then discussed the difficult situation of the world, the great problems facing mankind, from a religious, scientific and cultural point of view. During this discussion, the Pope told Castro that the absence of God in much of society today is the key problem facing mankind. He also told him he felt that the relationship between faith and reason, the need for both profound faith and clear reason, in harmony, not opposition, was important.

As he was waiting for the Pope, Castro said he had great admiration for Mother Teresa and for John Paul, whose visit 14 years ago marked a watershed in long-strained relations between the Communist government and the Church.

Castro reinstated Christmas as a holiday ahead of John Paul’s visit, and in talks on Tuesday with Raul Castro, the Pope asked the government to consider also making Good Friday, the day of Christ’s death, a national holiday.

What was the significance of this meeting? Will it go down in history as one of those significant, symbolic “turning points,” like the meeting of Pilate and Jesus, or of Gregory VII and Henry IV at Canossa?

The essential message that the Pope conveyed in Cuba was that the Church should be allowed to be free. “It must be said with joy that in Cuba steps have been taken to enable the Church to carry out her essential mission of expressing her faith openly and publicly,” the Pope said during his visit. “Nonetheless, this must continue forward… The right to freedom of religion, both in its private and in its public dimension, manifests the unity of the human person, who is at once a citizen and a believer. Cuba and the world need change, but this will occur only if each one is in a position to seek the truth and chooses the way of love, sowing reconciliation and fraternity.”

Ana Isabel Hernandez, 46, a Cuban Church worker who traveled 10 hours by bus from Villa Clara in central Cuba to see the Pope, applauded Benedict’s call for more religious freedom. “This is what everybody in Cuba was hoping for,” she gushed afterward. “A bit more freedom…”

And so we know, in part, what a Pope does: he speaks truth to power, and asks that the Church be set free. If Cuba makes Good Friday a national holiday, we will know that Castro heard his voice, and that their meeting changed life in Cuba.