Pope Francis to Visit Holy Land in May

Pope Francis to Visit Holy Land in May 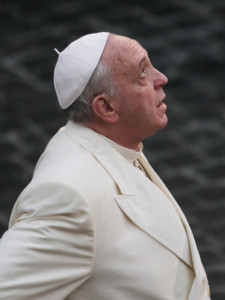 Only three Popes have visited the Holy Land. Now it has been announced that Pope Francis, walking in Paul VI’s footsteps, will visit Christ’s homeland May 24-26.

Fifty years after Paul VI, the first ever Pope to set foot in Jesus’ birthplace, made his 1964 journey to the Holy Land, Pope Francis is preparing to take the same route. If all proceeds according to plan, the Holy Father will go to the Holy Land in May, answering the invitations of Jordan, Israel and the Palestinian National Authority. In making this trip, the second international trip of his papacy, Pope Francis will be following in the footsteps of three of his four predecessors. Each of them left his own mark on a gesture with a universal signification.

In 1964 (prior to the 6-day war in 1967), Giovanni Battista Montini, the first Pope to leave Italy after one and a half centuries, boarded the airplane which would take him to the birthplace of Christianity on January 4. While the bishops in Rome were working on the Second Vatican Council, Peter’s successor traveled to Amman, Jordan. King Hussein of Jordan, the sovereign of the state then in possession of Old Jerusalem and in control of the holy places, was awaiting him at the airport. 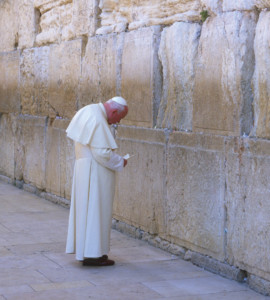 Left, Pope John Paul II at the Western Wall, in Jerusalem, leaving a message in a crack on March 26, 2000, during the Jubilee Pilgrimage to the Holy Land.

The images of that period show a Pope breaking the mold and opening to ecumenism: he left the Pontifical Throne and met Patriarch Athenagoras of Constantinople, who had come to Jerusalem to meet the head of the Catholic Church. Having been under mutual excommunication since 1054, the Churches of Rome and Constantinople met and embraced after nine centuries, exchanging gifts of theological relevance: Paul VI presented Athenagoras with a chalice; Athenagoras gave the Pope a gold cross commemorating the Millennium of Mount Athos and an engolpion, an episcopal medallion of Byzantine tradition.

It was a journey of great political impact which took place three years before the Six Day War, a war which was to change the face of the Holy Land.

John Paul II, in fact, was confronted with quite a different scenario in his journey to the same places because, even though Paul VI’s journey had been successful in terms of media coverage, it had not been so successful for the Church’s relations with the Jewish world. 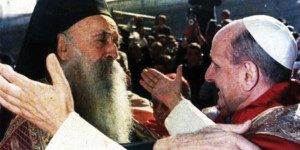 Pope Paul VI meets Athenagoras I, Patriarch of Constantinople, in Jerusalem on January 5, 1964.

Taking leave of the Israeli president, Paul VI spoke some words in defense of Pius XII, who had been attacked again for his alleged cowardly behavior in the Second World War. It would be up to Karol Wojtyła to heal the rift with the Jews, referring to them as “our elder brothers.”

John Paul II, who stayed in the Holy Land from 20 to 26 March in 2000, went to pray at the Western Wall, leaving a written prayer in a crack in the wall. It was an unplanned gesture, like his request for forgiveness “for the sins of the Church, both past and present.” 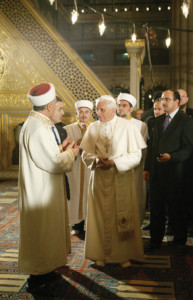 Also, his journey must be remembered for his attention to the Palestinian National Authority, his respect for the muezzin’s prayer, his visit to Dheheishe refugee camp and to the Holy Sepulcher: like Paul VI’s journey 36 years before, the Polish Pope’s journey was animated by the desire to bring a strong message of peace and brotherhood. In his Amman speech he said: “The peace process must continue, no matter how long or difficult it may be.”

Benedict XVI’s 2009 journey supplied other topics for debate: opposed by the Taliban, on the one hand, he was on the other hand favorably received by the Arab press which saw in his initiative an attempt at interfaith dialogue.

He visited the Al-Hussein Mosque, Jordan’s biggest mosque, where he spent some time in meditation and met Muslim leaders.

During his visit to the Aida refugee camp, he spoke out on behalf of peace in the Holy Land: “Here we are keenly aware of the deadlock which Israeli-Palestinian negotiations have reached… It is a tragedy to see walls erected in a world in which frontiers are becoming ever more open.”

He paid homage to Yad Vashem, the Holocaust Memorial, and he condemned denial of the Holocaust. Much of the Israeli press, however, was disappointed that the Pope did not say certain things, i.e., his failure to make any explicit reference to Nazism. In the end, Benedict XVI, like his predecessors, gave an urgent exhortation to hope. Addressing the faithful, the Holy Father encouraged them to stay in those territories, to remain near the empty tomb “which changed the history of mankind.” 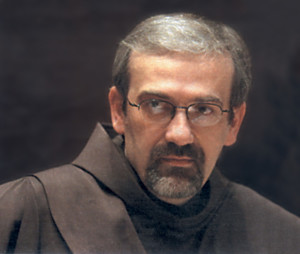 Father PIERBATTISTA Pizzaballa: “If Assisi is the goal, the Holy Land is the starting point”

Nazareth, November 7, 2013. Against the background of Pope Francis’ imminent visit to the Holy Land stands the dramatic situation of Christians in the Middle East, the victims of the Syrian civil war, the Israeli Palestinian conflict, and unemployment, which drives more and more people away from their land, especially to Latin America. When it comes down to figures, Father Pierbattista Pizzaballa, Custos of the Holy Land, warns: “Let us bear in mind that figures change depending on those who give them. However the real problem here in Nazareth is identity: a Christian, for example, is an Israeli citizen, but he’s not a Jew; he’s an Arab, but not a Muslim.” In a land where identities are defined on the basis of religion, even the civil registry is divided on a religious basis. Even an atheist, paradoxical and laughable though this may look outside the Middle East, belongs to a religious community and, needless to say, conversions are registered at the Interior Ministry, which runs the civil registry.”

Conversions seem to have increased lately, like the phenomenon of secularization, so that if, on one hand, we see such an increase in the number of conversions, especially among women who marry Muslims, to the point that interfaith marriages have become the norm, on the other hand we see an increase in the number of atheists among the Jews who nevertheless continue to observe the Sabbath just because they are part of the Jewish community.

Actually, even though the situation is difficult to understand outside the Middle East, Father Pizzaballa tries to explain it like this: “If the challenge in Europe is integration, the challenge here is coexistence.”

Also, he points out that in the future power relations will be affected by demographic relations.

With Jews and Muslims having more children than Christians, Christians may not disappear, but will certainly be weaker, also because it is the middle class that emigrates.

“It is true that, as the Pope says, the poor are our strength, but we also need lawyers, doctors and architects,” he says.

Though acknowledging the importance of a general vision, Father Pizzaballa stresses the difficulty of coping with the situations of daily life. In other words, if for a Catholic “Assisi is the goal, the starting point is the context and problems of his everyday life,” starting from his relations with other Christians regarded as his co-owners: “Each Church has built up its own vision of history and the Holy Sepulcher is indicative of inter-Church relations. In other words, the matter of debate is not theology, but the problems Christians are confronted with in their everyday lives, the Orthodox wanting to clean the floor with petrol and the Americans with floor detergent. As for Jewish-Muslim dialogue, the intervention of the Church is not necessary and if Jews and Muslims do not dialogue it is because they don’t want to.” In this connection there is a joke going around which Father Pizzaballa has rephrased like this: “The day that man’s landing on Mars is announced on TV, the second piece of news will be ‘dialogue going on in the Middle East.’” —Mariaelena Finessi