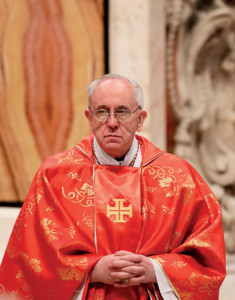 March 12, 2013, St. Peter’s Basilica. Holy Mass for the Election of the Roman Pontiff celebrated by Cardinal Angelo Sodano, Dean of the College of Cardinals. Cardinal Jorge Mario Bergoglio seems pensive — perhaps he is beginning to be aware that the task will fall to him…

During the past 12 months, Francis has won the hearts of millions around the world as “Parish Priest” of the Vatican and a “Shepherd to the World”.

Pope Francis’ most frequent advice and exhortation to Catholics, from laypeople in parishes to bishops and cardinals, is “Go forth.”

In Italian, the phrase is even snappier: “Avanti.”

As the world’s cardinals gathered at the Vatican in early March 2013 to discuss the needs of the Church before they entered the conclave to elect a successor to Pope Benedict XVI, “avanti” was at the heart of a speech by then-Cardinal Jorge Bergoglio of Buenos Aires, Argentina. The speech captured the imagination of his confrere, Havana Cardinal Jaime Ortega Alamino, who received permission to share it after Pope Francis was elected.

“Put simply, there are two images of the Church: a Church which evangelizes and goes out of herself” by hearing the word of God with reverence and proclaiming it with faith; and “the worldly Church, living within herself, of herself, for herself,” Bergoglio told the cardinals before they elected him Pope.

He also used another image that has become a frequent refrain during his first year as head of the Church: “In Revelation, Jesus says that he is at the door and knocks. Obviously, the text refers to his knocking from the outside in order to enter, but I think about the times in which Jesus knocks from within so that we will let him come out.”

The need for the Church to go out into the world with the Gospel also was the central theme of this first apostolic exhortation, Evangelii Gaudium (“The Joy of the Gospel”), published in November. 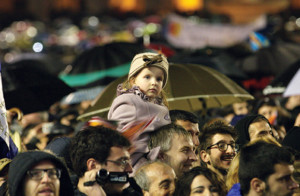 March 13, 2013, St. Peter’s Square. The white smoke and the hour on the clock on the facade of the basilica at the moment of the election of Cardinal Bergoglio as the Bishop of Rome. He took the name “Francis.”

In the document, the Pope called on Catholics to go out into the world, sharing their faith “with enthusiasm and vitality” by being living examples of joy, love and charity. “An evangelizer must never look like someone who has just come back from a funeral,” he wrote.

Over and over during the first year of his pontificate, Francis has asked practicing Catholics to realize the grace they have been given and accept responsibility for helping others experience the same grace — especially the poor, the sick and others left on the “peripheries” or margins of society. The health of the Church depends on it, he has said.

If Catholics jealously hoard the gift of being loved by God and the joy of salvation, not sharing it with others, “we will become isolated, sterile and sick Christians,” he said in his message for World Mission Sunday 2013. 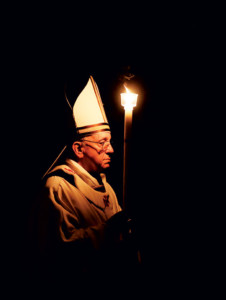 “Each one of us can think of persons who live without hope and are immersed in a profound sadness that they try to escape by thinking they can find happiness in alcohol, drugs, gambling, the power of money, promiscuity,” he told parish leaders from the Diocese of Rome in June. “We who have the joy of knowing that we are not orphans, that we have a father,” cannot be indifferent to those yearning for love and for hope, he said. “With your witness, with your smile,” you need to let others know that the same Father loves them, too.

Even in countries like Italy where the majority of inhabitants have been baptized, most people do not practice their faith. “In the Gospel there’s the beautiful passage about the shepherd who realizes that one of his sheep is missing, and he leaves the 99 to go out and find the one,” Pope Francis told the parish leaders. “But, brothers and sisters, we have only one. We’re missing 99! We must go out and find them.” 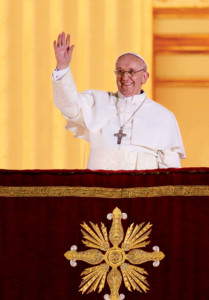 In March 2013, the new Pope appears for the first time on the balcony of St. Peter’s Basilica and asks the people of Rome, and the world, to pray for him.

Sheep metaphors are frequent in Pope Francis’ speeches and homilies. Urging priests and bishops to spend time among people, he told them they should be “shepherds living with the smell of sheep.” In a morning Mass homily February 14, the feast of the great evangelists Sts. Cyril and Methodius, Pope Francis said Christians always remember they are sheep in Christ’s flock. They must preserve their humility as they go into the world, even if they find themselves among wolves.

“Sometimes, we’re tempted to think, ‘But this is difficult, these wolves are cunning, but I can be more cunning,’” he said. “If you are a lamb, God will defend you, but if you think you’re as strong as the wolf, he won’t, and the wolves will eat you whole.”

Celebrating Mass with an estimated 3 million young people at World Youth Day in Rio de Janeiro in July, Pope Francis said, the obligation to share the Gospel and care for others comes with baptism, and no one is excused from the task, he said. “Jesus did not say, ‘One of you go,’ but ‘All of you go.’ We are sent together.”

Pope Francis told the young people in Rio, as he told others before and since: “Be creative. Be audacious. Do not be afraid.” 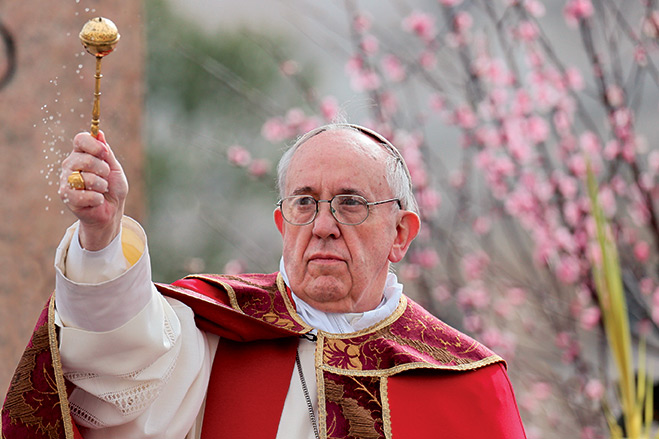 March 24, 2013. St. Peter’s Square. Palm Sunday. Prayer and blessing of the palms by Pope Francis prior to Holy Mass. 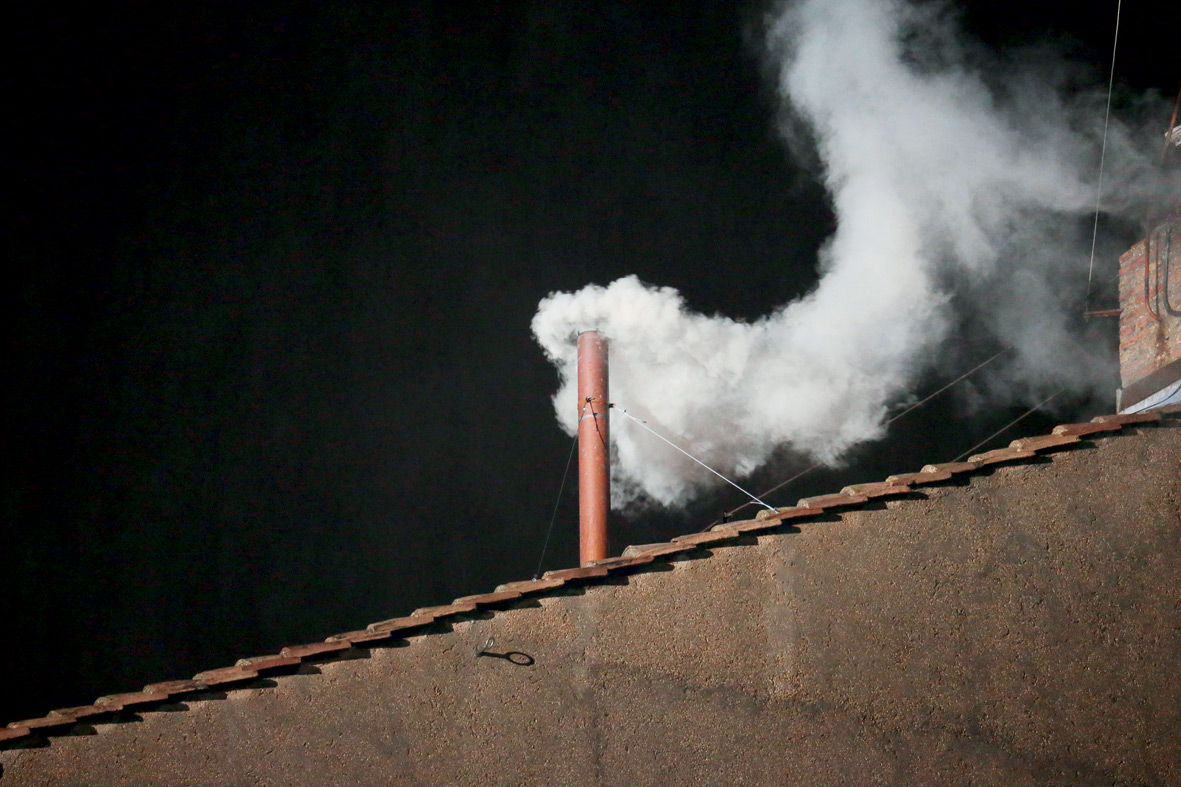 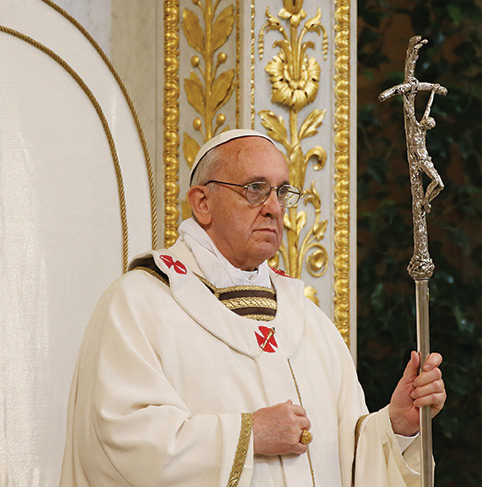 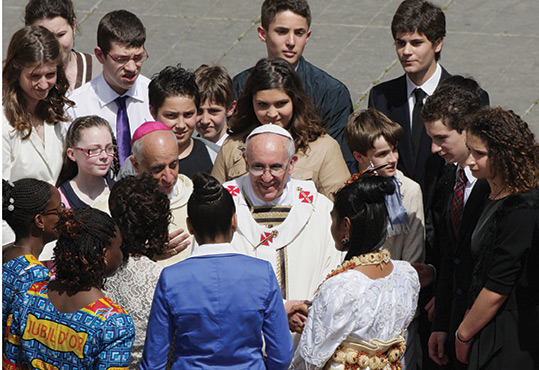 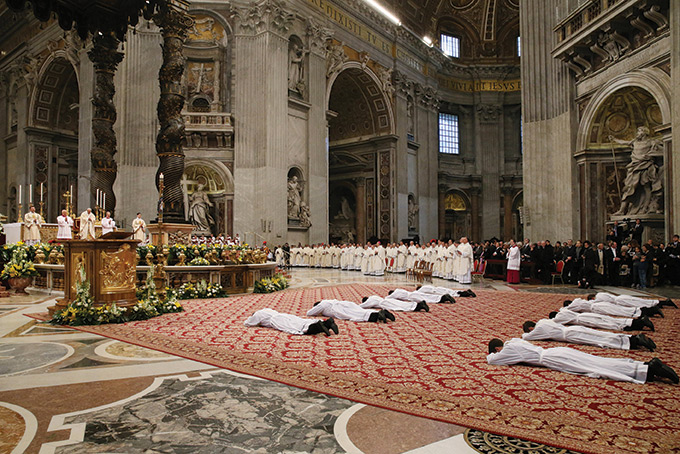 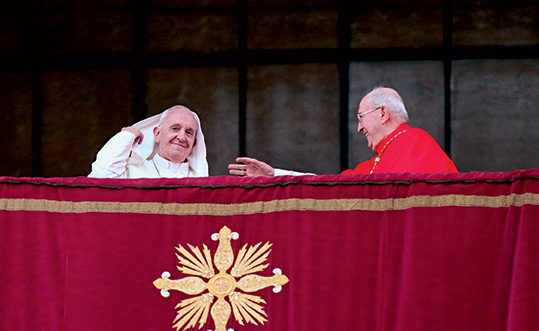 April 7, 2013. Rome, Divine Mercy Sunday.
The Pope takes possession of the Basilica of St. John Lateran and then greets the crowd from the balcony of the basilica, along with Cardinal Agostino Vallini, his vicar for Rome. 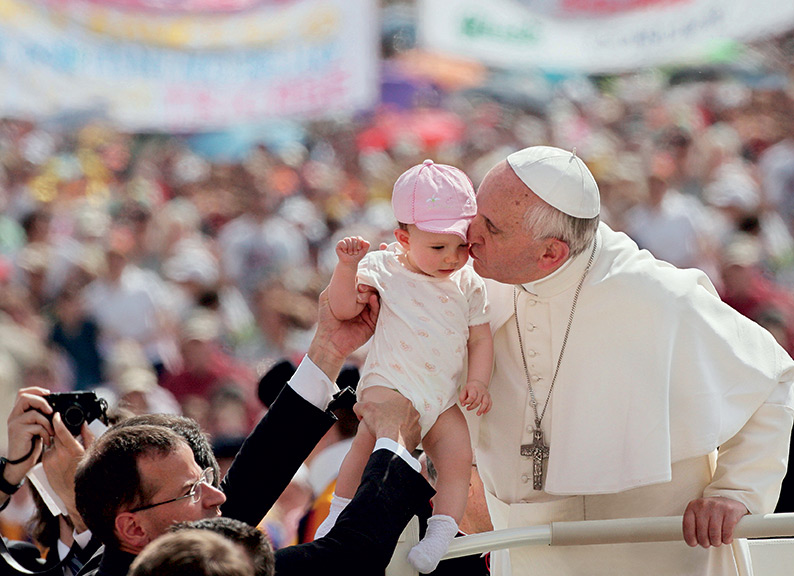 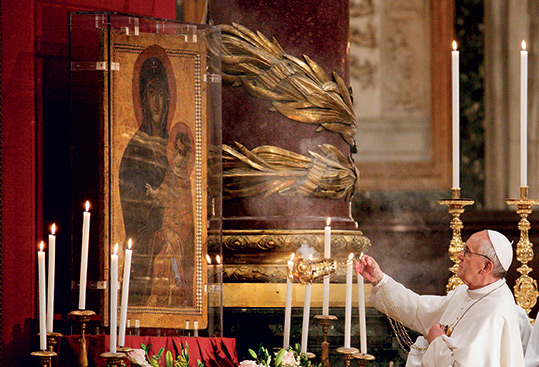 May 4, 2013. Rome, Basilica of Santa Maria Maggiore (St. Mary Major). Pope Francis leads the recitation of the Rosary in front of the icon of Mary “Salus Populi Romani” (“Protection of the Roman People”). 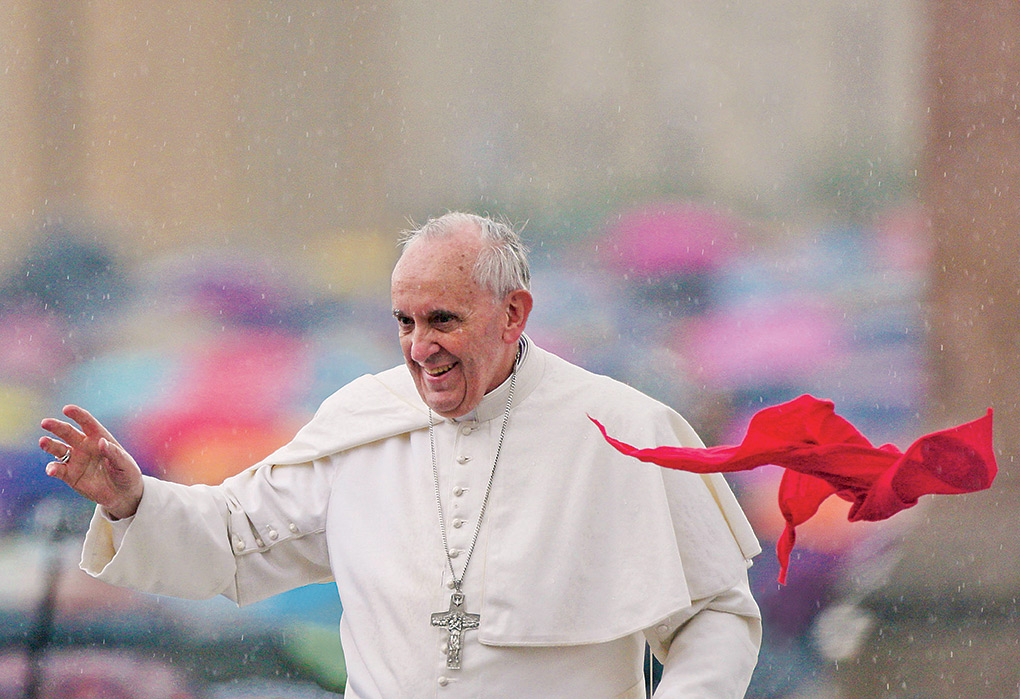 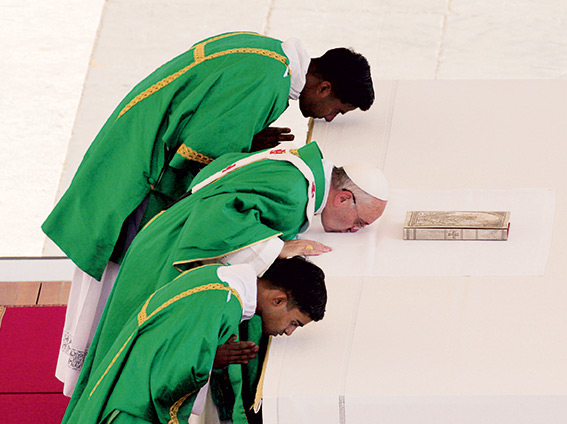 Left, June 16, 2013, St. Peter’s Square. Holy Mass celebrated by Pope Francis on the occasion of the “Evangelium Vitae” (“Gospel of Life”) Day in the Year of Faith. 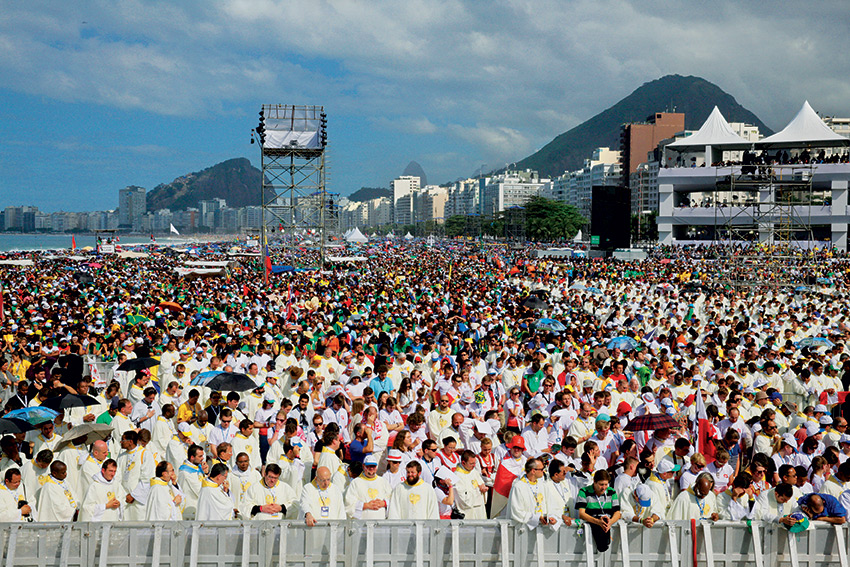 July 28, 2013. Rio de Janeiro, Brazil. The first Apostolic Journey of Pope Francis outside of Italy was on the occasion of the 28th World Youth Day. Francis celebrated Holy Mass in the presence of c. 3 million young people on Copacabana beach. 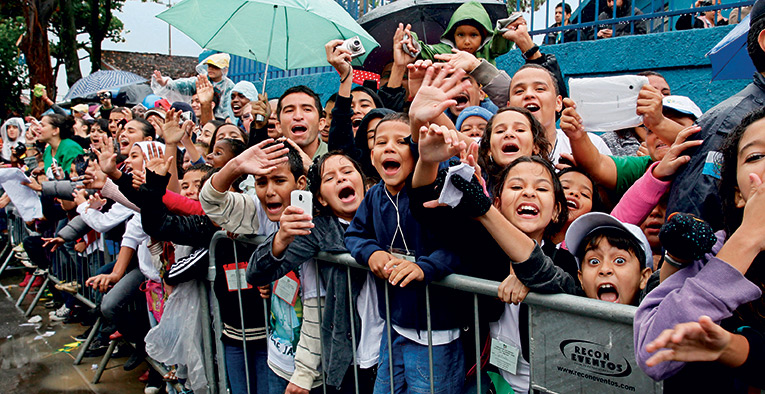 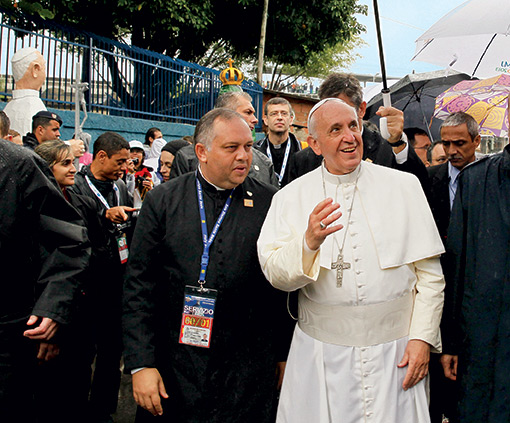 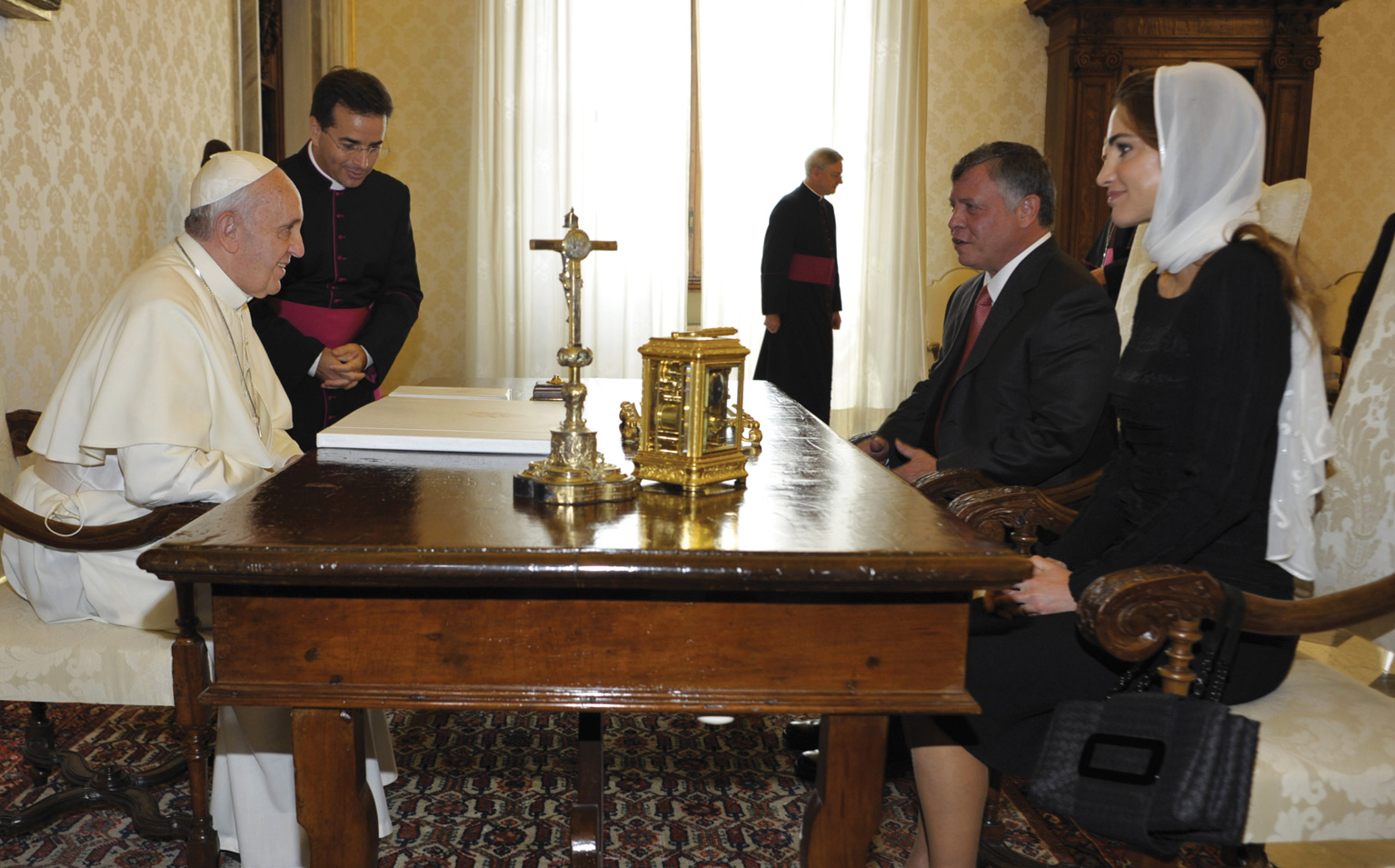 August 29, 2013. In the Pope’s Private Library, in the Vatican. Pope Francis received His Majesty Abd Allah II Ibn Husayn, King of Jordan, with his wife. 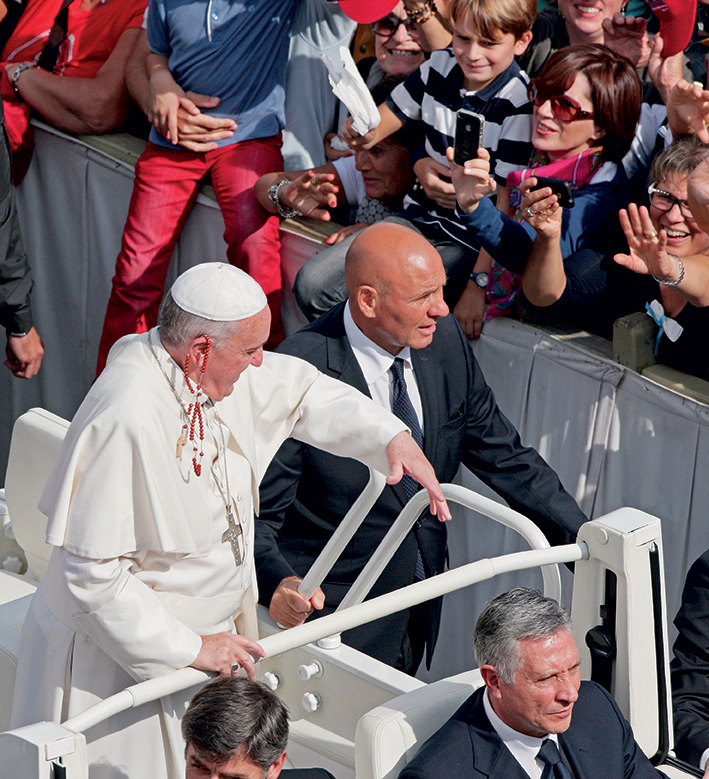 October 13, 2013, St. Peter’s Square. Following Mass, the Holy Father went around the square to greet the faithful. One person tossed rosary beads toward him, and it caught by chance on the Pope’s ear… 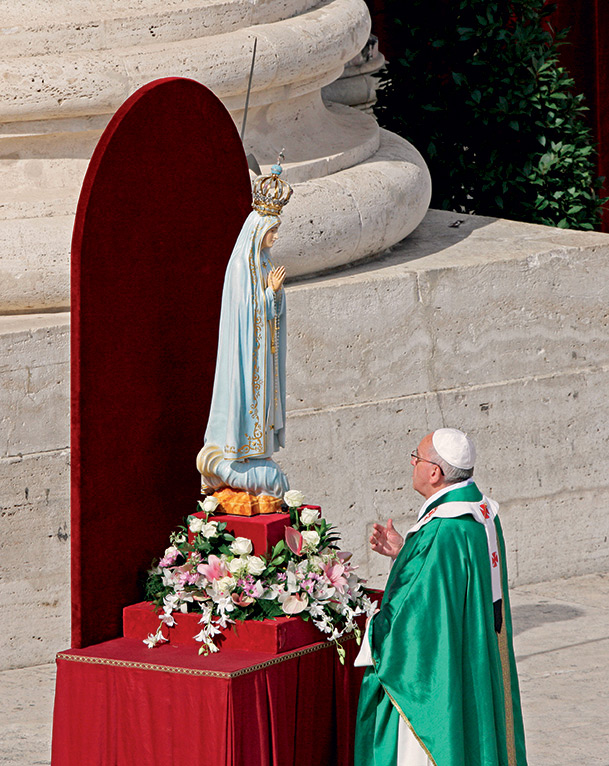 October 13, St. Peter’s Square. The Holy Father celebrated Mass in the presence of the original statue of Our Lady of Fatima, brought to Rome from Portugal. At the end of the Mass, the Pope entrusted his pontificate to the Madonna of Fatima. 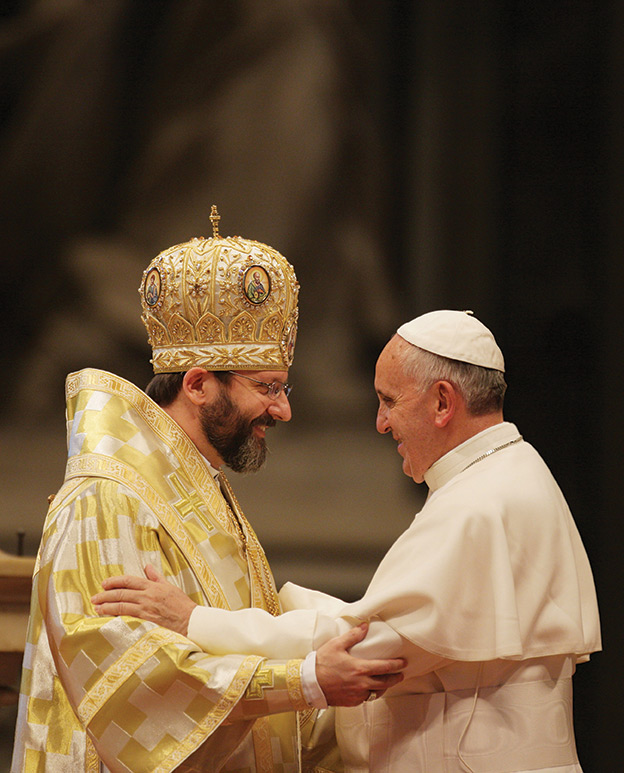 November 25, 2013. St. Peter’s Basilica. The divine liturgy of St. John Chrysostom was celebrated at the Altar of the Confession by His Beatitude Sviatoslav Shevchuk, Major Archbishop of Kyiv-Halych and head of the Greek-Catholic Church in Ukraine. At the end of the liturgy, Pope Francis entered the basilica and met with the Ukrainian faithful to greet them and give them his Apostolic Blessing. 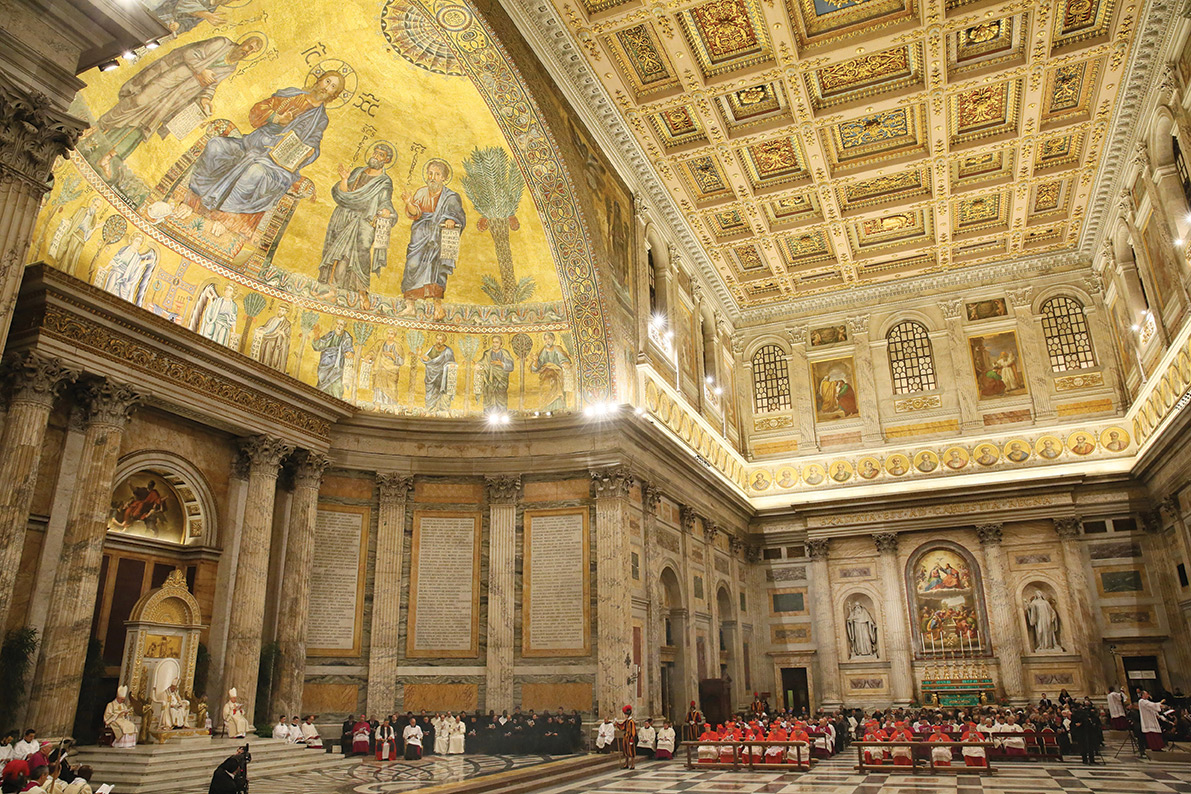 January 25, 2014. Rome. Celebration of Second Vespers on the Solemnity of the Feast of the Conversion of St. Paul the Apostle, presided over by the Pope in the Basilica of St. Paul’s Outside-the-Walls (San Paolo Fuori le Mura). A series of 266 circular mosaic portraits depicting all of the Popes lines the walls of the basilica, and the mosaic of Pope Francis, seen here, has just been installed. 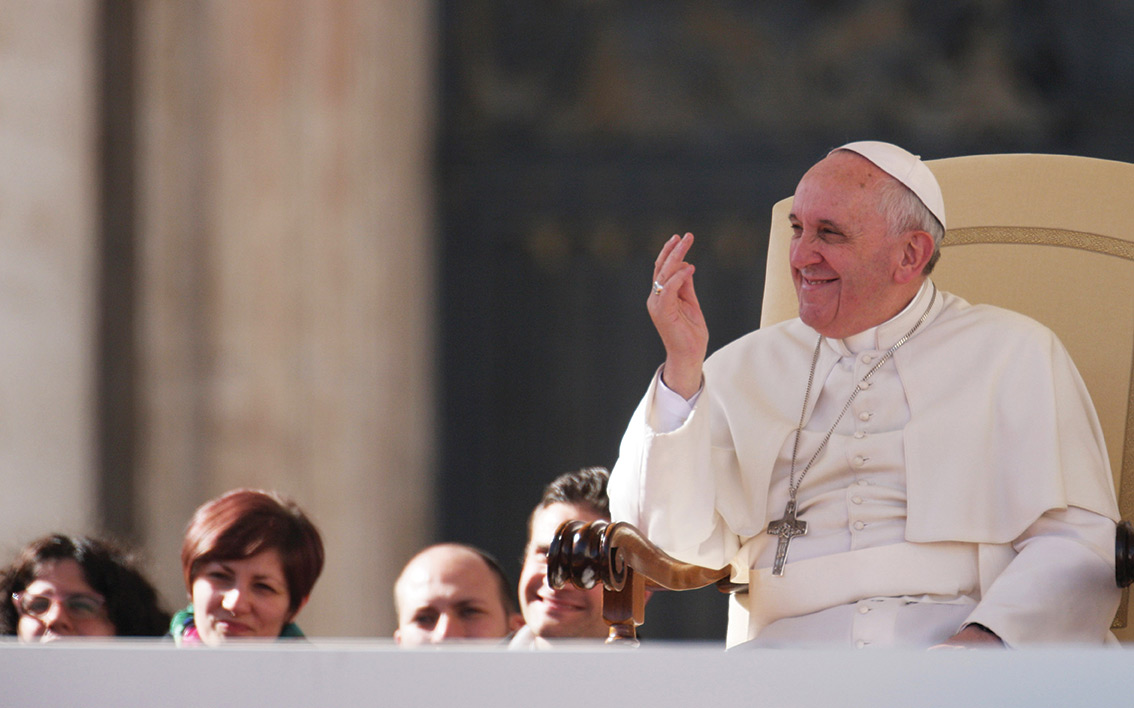