Where is your treasure? A conversation with Pope Francis

Where is your treasure? A conversation with Pope Francis

After one year, the world is beginning to know Pope Francis. But what is really the deep source of his thought and action? In a recent meeting with Belgian youth, he reveals much about his inner life…

An interview showing Pope Francis answering questions from Belgian young people was shown on the Flemish TV station, VRT, on April 3. The youths, accompanied by Bishop Lucas Van Looy of Ghent, put their questions to the Pope in English. He replied in Italian. Their meeting (photo) was filmed on March 31 inside the Apostolic Palace in the Vatican. The group of Belgian young people included a non-Christian who said she was inspired by the words of Pope Francis. 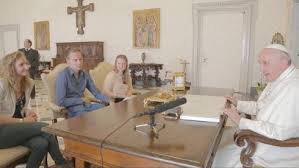 The Pope conversing with children from Belgium.

Are you happy? Why?

Pope Francis: Absolutely, absolutely (laughing) I’m happy! And it’s a tranquil happiness because at this age one no longer has the same happiness of a young person, there’s a difference. There’s a certain interior peace, a strong sense of peace, of happiness, that comes with age. But it’s a road that has always had problems. Even now there are problems but this happiness doesn’t go away because of the problems. No, it sees the problems, suffers because of them and then goes forward, it does something to resolve them and goes ahead. But in the depth of my heart there is this peace and happiness. It’s truly a grace from God, for me. It’s a grace and it’s not through my own merit.

What is the reason for your great love for the poor?

Pope Francis: Because it’s the heart of the Gospel. For me, the heart of the Gospel is about the poor. Two months ago, I heard a person who said (on hearing this): “But this Pope is a communist!” But no! This is the banner of the Gospel, not of communism: of the Gospel! But it’s poverty without ideology…. And it’s for this reason that I believe that the poor are at the center of Jesus’ message. All you have to do is read it. The problem is that this attitude towards the poor has sometimes during history been made the subject of ideology.

(The girl among the group who is a non-believer asked Pope Francis): What message do you have for all young people?

Pope Francis: We’re all brothers and sisters. Believers, non-believers or whether belonging to this or that religious confession, Jews, Muslims… we’re all brothers and sisters! Human beings are at the center of history and this for me is really important: humans are at the center (of society). In this moment of history, humans have been pushed away from the center, they have slid towards the margins and at the center — at least right now — there’s power, money and we must work on behalf of human beings, for men and women who are the image of God. Today we’ve become part of a “throw-away culture”: Children are discarded, people don’t want children, or less of them, small families: Old people are also discarded: many elderly people die because of a hidden euthanasia, because nobody takes care of them and they die. And now young people are being discarded…

Asked about the search for God, the Pope replied:

Pope Francis: When a person searches for him or herself, they find God. Maybe, they don’t succeed in finding him but they are going along the path of honesty, searching for the truth, for a road of goodness and a road of beauty… they’re on the right road and it’s certain they’ll find God! Sooner or later, they will find him. But the road is a long one and some people don’t find him in their lives. They don’t find him consciously. But they are very true and honest with themselves, very good and lovers of beauty, so that in the end they have a very mature personality, capable of an encounter with God, which is always a grace. Because an encounter with God is a grace.

What did you learn from your mistakes?

Pope Francis: Mistakes are great teachers, they teach you so much. They also humiliate you because someone may feel a superman, a superwoman… but then you make a mistake and this humiliates you and puts you in your place. I would not say that I have learned from all my mistakes: I believe I haven’t learned from some of them because I’m stubborn (laughing), and it’s not easy to learn. But I have learned from many mistakes and that’s been good for me. It’s also a case of recognizing our mistakes. I make a mistake here, I made a mistake there… And also being careful not to go back and make the same mistake.

Do you have an example of how you learned from a mistake?

Pope Francis: One example, in the conducting of the Church’s life: I was named Superior (of the Jesuits in Argentina) when very young and I made so many mistakes because of my authoritarianism, for example. I was too authoritarian: at the age of 36… and then, I learned that one must dialogue, one must listen to how others think… But I didn’t learn this for ever after! It’s a long road.

What do you fear?

Pope Francis: Well, myself (laughing) Fear… But look in the Gospel, Jesus repeats it so often: “Don’t be afraid! Don’t be afraid!” And he says it many times, doesn’t he? And why’s that? Because he knows that fear is a rather “normal” feeling. We’re afraid of life, we’re afraid when faced with challenges, we’re afraid in front of God. We’re all afraid, all of us. You mustn’t worry about being afraid. You must feel that but not be afraid and then ask yourselves: “Why am I afraid?” And in front of God and in front of yourselves, try to shed light on the situation or ask help from another person. But fear is not a good advisor because it gives you bad advice. There is bad fear and good fear. Good fear is like caution: It helps us not to fall down. And then there is bad fear: This blocks you and doesn’t let you do anything. And you must reject it.

Do you have a question for us?