And he wanted the celebration to be like a family birthday party. To this end, he asked his “hands,” the man who visits the poor of wrong on the Pope’s behalf, to invited 4 homeless men, who sleep under archways in the streets near the Vatican, to join him for 7 a.m. Mass and the breakfast that followed.
The Pope’s closest collaborators were present… including the staff of the Domus Santa Marta — waiters, room cleaners, front desk personnel. And during his homily, the Pope referred to them by name: Pedro (a waiter from Romania with a newborn child), Harmony (a young Italian woman who speaks excellent English), and a number of others…

Afterwards, all those present, including the four homeless men, sang a birthday song for the Pope, and then joined him for breakfast in the dining room nearby.

Also present at the Mass were Archbishop Pietro Parolin, the new Secretary of State, and Cardinal Angelo Sodano, the Dean of the College of Cardinals.

The Pope’s Almoner, Archbishop Konrad Krajewski, brought the 4 homeless men, who live in the streets near the Vatican (photo below, with one of the men holding his closest companion, a small dog). 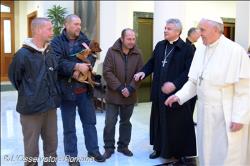 Today’s readings centered on the genealogy of Jesus — the long list of Jesus’ ancestors (Genesis 49, and Matthew 1:1-17).

In his homily, the Pope reflected on all of these names: Adam, Abraham, Solomon, and all the rest.

The list of names shows us that God is a “God of the living,” an enduring presence in all human lives throughout history.

“God wished to live out his life alongside of us,” Francis continued.  “He took his surname from each of us.” (Meaning that God could be named and known as the “God of Abraham,” the “God of Isaac,” and so forth; God’s very identity was linked to specific individuals.)

“God has always walked alongside his people,” the Pope said.

God did not want to come to redeem us without coming to live among us and to share our lives, Francis said.

The Pope said this long list of God’s people included both “saints” and “sinners.”

Indeed, the latter, the sinners, included “high-level sinners who committed serious sins and who didn’t listen” to God’s plans for them, Francis said.

“Consider Solomon, so great, so intelligent, and in the end, poor fellow, he ended up not knowing his own name!” Francis said. “But God was with him. And this is the beautiful thing, no? God is consubstantial to us. He makes history with us… What is the last name of God? We are, each one of us. He takes from us a name to make up his last name. ‘I am the God of Abraham, of Isaac, of Jacob [and here the Pope began to look toward those who were present in the congregation] of Pedro, of Marietta, of Armony, of Marisa, of Simone, of all!’ He takes his last name from us. he last name of God is every one of us.”

When people sin, Francis said, God does not abandon them. He continues to accompany them, even as they go “off course” in ways He would have preferred that they not take. He never gives up accompanying individual persons — even in their most grave sins.

In this way, God displays His humility, His patience and His love for us, Francis said. “This brings us to tears,” Francis said. “So much love, so much tenderness, to have a God like this!”

But this does not mean we should yield to sin, Francis said, exploiting, as it were, God’s limitless goodness and mercy.

Rather, we ought to come in the end to the conviction that we should and will follow God’s plan for our lives, his wishes for us, rather than our own plans and wishes, in our to find our true peace and happiness.

Francis concluded his homily with “a Christmas wish” for all of us “to allow God to write our lives for us.”

“God’s joy was to share His life with us,” Francis said. “The Book of Wisdom says that the joy of the Lord is (to be) among the children of man, with us. As we draw close to Christmas, we think: if He has made his history with us, if He has taken his last name from us, if he has permitted us to write His history, then at least let us allow Him to write our history. That is what holiness is: ‘Allow the Lord to write our history. And this is a Christmas wish for all of us: that the Lord may write your story, and that you may allow Him to write it for you. May it be so!” (link)

In Italy, the Constitutional Court sent a telegram to the Pope, through the secretary of State, Archbishop Pietro Parolin, congratulating Francis for his “profound and intense pastoral work in the defense of the dignity of the human person and for peace in the world.”

The Italian Bishops’ Conference sent Francis a message referring to his “tireless apostolic ministry which offers words of life and mercy, opening up paths and spreading hope.”

Pope Francis was also scheduled to receive a special gift: a visit from a delegation from the football team San Lorenzo de Buenos Aires — the Pope is a lifelong fan of that team — who will bring with them the Cup of the “Inicial” Championship, which they won last Sunday.

In the Roman parish of San Lorenzo in Piscibus, the San Lorenzo International Youth Center – just outside St. Peter’s Square  – various groups of young people will offer 24 hours of Eucharistic adoration in homage to Pope Francis, in shifts throughout the day and the night, joined by the Catholic Knights Templar.

The birthday celebrations will not end today.

On Friday, 20 December, the Roman Basilica of St. Mary of the Angels and Martyrs will offer a concert in honor of the Pope, with the participation of numerous Italian and foreign artists who, as well as performing musical pieces, will also read significant passages from the Pope’s writings.

The repertory will include the Misa Criolla by the Argentine composer Ariel Ramirez, one of the Pope’s favorite works, which will be performed by the Basilica’s Schola Cantorum choir using popular Argentine instruments, and with the participation of the Chilean soprano Macarena Valenzuela.

The head of Vatican Radio’s Spanish-language program for Latin America, Fr. Hugo Guillermo Ortiz, SJ, who lived with then-Fr Jorge Mario Bergoglio, SJ, when the man who would become Pope Francis had charge of a parish attached to the Jesuit formation house of which he was rector from 1980-1986 in his native Argentina, told Vatican Radio that the Holy Father’s greatest joy is in making others happy: especially children.

“We had a special assignment,” Ortiz said, “to make the children happy.” There were teaching and faith formation programs for the parish. But, said Ortiz, “Making [people] happy was a principal pastoral challenge – and the parish was an incredible school.”

Francis on “the same theological line” as the “conservative” Benedict XVI?

As the blogosphere continues to debate the significance of Pope Francis’s decision not to renew the appointment of Cardinal Raymond Burke for five more years as a member of the Congregation for Bishops (announced yesterday), Manfred Lütz, a German theologian who has been a friend of Joseph Ratzinger (Pope Benedict XVI) for more than 30 years, says the former Pope told him personally that he feels he is, as it were, “in synch” with Pope Francis’s theological line.

This should startle all those who fear that Francis is a revolutionary who will reject and overthrow all that he predecessor taught.

According to the report of Elise Harris, of the Catholic News Agency (CNA), Benedict feels himself in “theology harmony” with Pope Francis.

Here are key excerpts from that report, published on December 13:
Vatican City, Dec 13, 2013 / 05:22 am (CNA/EWTN News).- Manfred Lütz, a close colleague of Benedict XVI, revealed in a recent interview that he is still in contact with retired pontiff, who still considers himself in the service of the Church, and of Pope Francis.

“He’s praying, and this is an important aspect,” he said, “of the service of St. Peter.”

Manfred Lütz is a German psychologist and theologian, and was present in Rome for the Pontifical Council for the Laity’s Dec. 5-7 plenary on “Proclaiming Christ in the Digital Age.”

The theologian explained that he originally met Cardinal Ratzinger when he first came to Rome in 1980, because the two lived together for “some weeks” near a German cemetery inside of the Vatican, adding that “I lived here to study, and so I know him since that time.”

In his recent conversation with Benedict XVI, Lütz stated that “for me, it was a very, an emotional vision that Pope Francis is there as the Pope and behind Pope Francis there is another pope…Benedict, who is praying, like Moses, for Pope Francis and the Church.”

Lütz noted that although Benedict is “old physically… mentally he was very good. He had a better memory than me!”

The occasion of his meeting with the Benedict XVI, Luetz stated, was a book that he has written with Cardinal Cordes, the previous president for the Pontifical Council “Cor Unum,” about a speech the retired pontiff made in Freiburg, Germany emphasizing that “the Church has not to be too near to the world.”

“We’ll say the Church has to be in the world, this is clear, but the Church has not to be too much involved in power of the world… and this is the same thing that Pope Francis says.”

“Benedict said to us that he also has the impression that theologically he is very in the same line with Pope Francis.” (link)

As these events unfold in Rome, in Russia the top official in charge of ecumenical dialogue for the Vatican (the dialogue aimed at improving relations between separated Christians) has been meeting with leading Russian Orthodox officials, as well as with the small Catholic community in Russia.

Cardinal Kurt Koch, head of the Council for Promoting christian Unity, has been in St. Petersburg, and tomorrow he is scheduled to meet with Patriarch Kirill in Moscow.

The ultimate goal of such a visit would be to improve Catholic-Russian Orthodox relations so much that there could be a meeting between the leaders of the two Churches, the Patriarch and the Pope.

Here is a report on the trip thus far, from a Russian Orthodox news agency:

St. Petersburg, December 17, Interfax – Preparation for the meeting between Pope Francis and Patriarch Kirill is more important than the meeting itself, Head of the Pontifical Council for Promoting Christian Unity, Cardinal Kurt Koch said.

Preparing such a meeting is more important than the meeting itself – this is an important and historical event, which requires preparations, Koch told reporters.

The relations between the Catholic and Orthodox Churches are improving, Koch said. The cardinal said it made him happy. The two Churches have more understanding and share more stances on certain issues, he said.

Koch will meet with Patriarch Kirill of Moscow and All Russia on December 18. (link)

The Passing of a Cardinal

He had suffered a stroke on November 25 and never recovered.
Following his death, the College of Cardinals numbers 199 members, 109 of whom are eligible to vote. It is expected that Pope Francis will name about 12 new cardinals on February 22. Their names are expected to be released during the next four weeks.

This afternoon, Pope Francis received in private audience Cardinal Angelo Amato, SDB, Prefect of the Congregation for the Causes of Saints.

During the audience, Francis, having heard the testimony of the Cardinal Prefect, extended to the whole Church the liturgical cult in honor of Blessed Peter Faber, a priest professed in the Society of Jesus, born in Le Villaret (Haute Savoie) France on April 13, 1506 and died in Rome on August 1, 1546, enrolling him in the catalogue of the Saints.