Shuffle of Bishops, Non-renewal of Burke and Rigali, Raise Eyebrows

Shuffle of Bishops, Non-renewal of Burke and Rigali, Raise Eyebrows 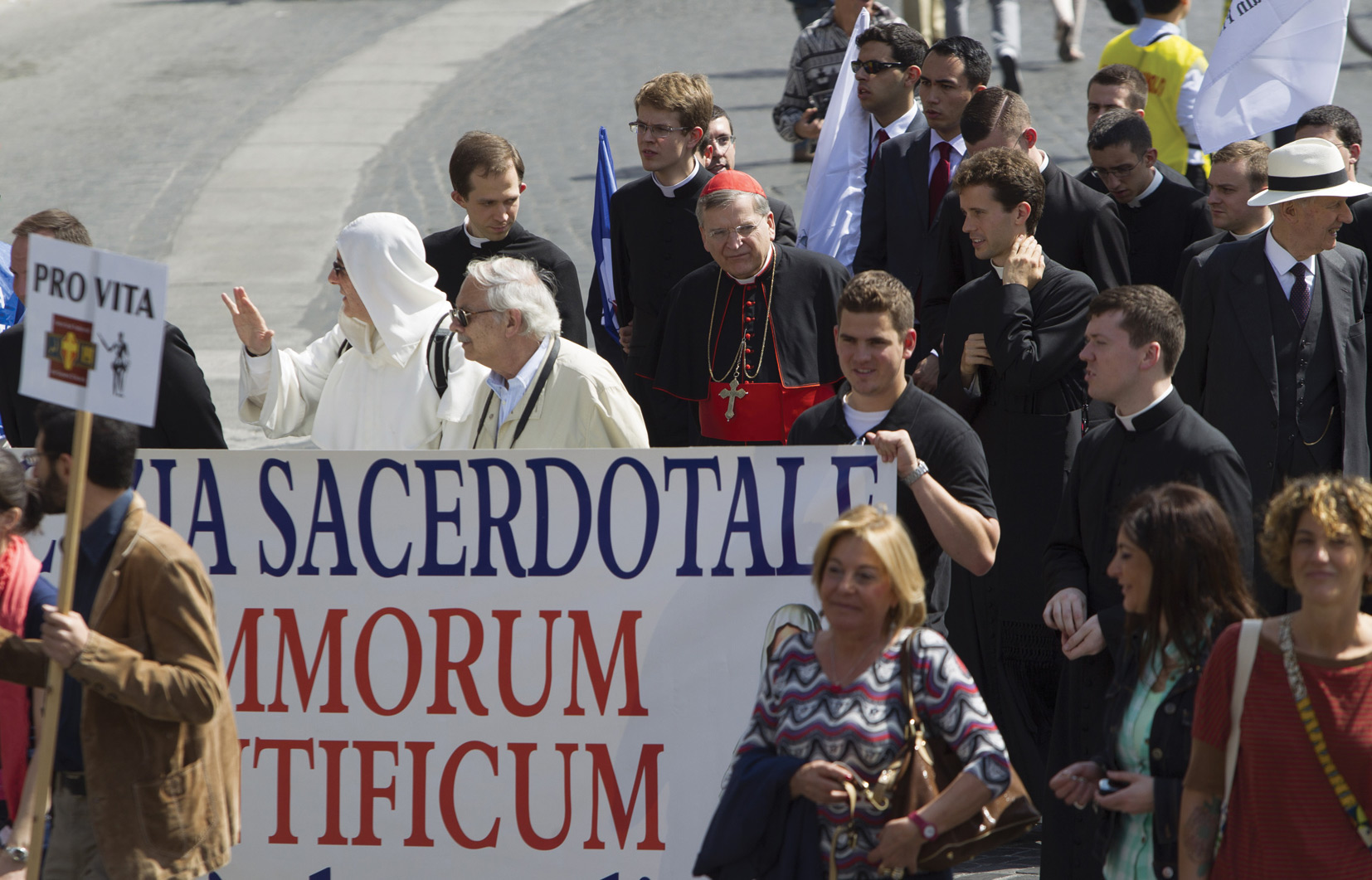 American Cardinal Raymond L. Burke marches with pro-life demonstrators during the third annual national March for Life in Rome May 12, 2013.

Pope Francis did not renew the memberships of some well-known cardinals to the Congregation for Bishops, which is in charge of the choices of bishops worldwide. The reasons are not yet clear, but observers are watching closely, and commenting…

Pope Francis has Vatican-watchers turning somersaults as they parse his every decision in an attempt to gauge the direction he may lead the Church.

In December, those somersaults almost became back-flips, as a re-shuffling of the membership of the Holy See’s Congregation for Bishops — which chooses most Catholic bishops for the Latin rite around the world (some are chosen by the Congregation for the mission countries, Propaganda Fide) — sparked an outpouring of  analysis in the blogosphere. 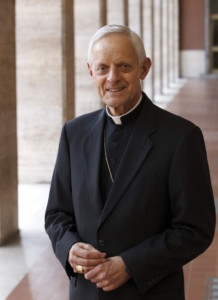 American Cardinal Donald Wuerl, who was appointed to the Congregation.

(To select Catholic bishops, the local Nuncio in each country chooses three candidates, called the terna, and forwards the names to Rome; the Roman Congregation of Bishops considers the names, and often approves the top candidate of the three, but not always. The composition of the Congregation is studied carefully by Vatican-watchers looking for “progressive” or “conservative” trends in Rome.)

But this conclusion may be based on an agenda-driven thought process rather than on a true understanding of what Pope Francis is trying to do.

One key concern, it would seem, is to include men whom the Pope knows personally, men like Stella, Baldisseri, Koch, Ortega, Gomez and Braz de Aviz.

The official Vatican communique today said the Pope had:

• he has confirmed the Consultors. 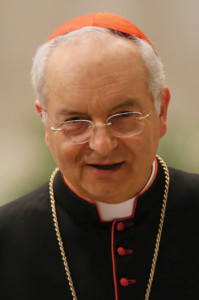 Robert Mickens, writing for The Tablet of London, observed: “Pope Francis has re-confirmed Cardinal Marc Ouellet PSS, 69, as prefect of the Congregation for Bishops, an office he has headed since 2010. But the Pope today also significantly altered the Congregation’s membership by replacing three leading conservatives – including US Cardinal Raymond Burke, 65.”

Gerard O’Connell, writing for Vatican Insider of Turin’s La Stampa newspaper, put the matter this way: “Apart from the new appointments, surely the most striking aspect of the Pope’s decision was the non-confirmation of several very highly influential members of the Congregation, among them the American cardinals Raymond Burke and Justin Rigali, the Italian cardinals Mauro Piacenza and Angelo Bagnasco, and the Spanish cardinal Antonio Rouco Varela.” 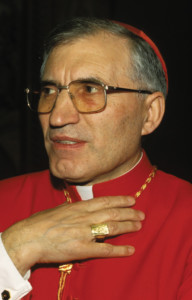 O’Connell continued: “From the perspective of the Catholic Church in the USA, the non-confirmation of Cardinals Rigali and Burke is particularly significant.  Sources say Rigali, who stepped down as archbishop of Philadelphia in 2011, had played a major role in the selection of bishops for dioceses in the USA for some two decades. Likewise, Cardinal Burke, the head of the Vatican’s highest tribunal — the Signatura Apostolica — and a leading figure in the conservative wing of the Church, had become a most influential player in the selection of US bishops ever since Benedict XVI appointed him to that congregation in 2009.” 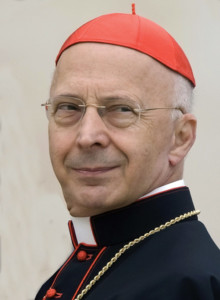 David Gibson, writing for Religion News Service, under the title “In Rome, an American rises and another American fades,” characterizes Burke as “a very conservative holdover from the Benedict XVI era and a fan of the kind of high liturgical finery that Pope Francis does not take to, at all.”

Gibson’s “take” is that there is a kind of “rivalry” between the more conservative Burke and the more progressive Wuerl, and that Francis has “dropped Burke from the Congregation for Bishops and added Wuerl.”

Gibson writes: “The two cardinals are not known to be allies, to say the least. It’s even less likely now that they’ll be exchanging Christmas cards this year.”

Joshua McElwee of The National Catholic Reporter noted another twist in the tale. Burke a few days ago gave an interview to EWTN television (last Thursday) in which Burke says “he does not understand why the Pope does not focus more on opposing abortion.”

The implication is that Burke is mildly critical of Pope Francis, and that, a few days after making these mild criticisms, he was not reappointed as a member of the Bishops’ Congregation.

This is certainly wrong. The decision about whom to appoint, whom to renew, and whom not to renew, was taken long before that interview was aired.

Moreover, reading any personnel decision of the Pope as a clear indication of his own theological position, for example, on a matter like the liturgy (in other words, that Francis is opposed to the old liturgy because he did not reappoint Burke to the Bishops’ Congregation), is likely inaccurate.

Francis has given us enough evidence of his respect for the Eastern rite (the Byzantine rite, which has much in common with the Tridentine rite), for example, that it seems clear he has no intention of reversing Pope Benedict’s decision to “rehabilitate” the old Latin rite with Summorum Pontificum on July 7, 2007.

There are many factors which came into play in the Pope’s decision on whom to appoint to the Congregation for Bishops; to reduce the decision to a “purge” of the liturgically “conservative” Burke is a reductionist mis-reading of Francis’s intent. 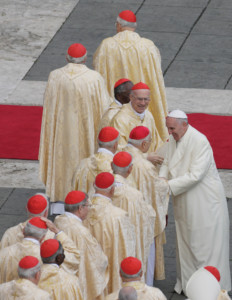 Pope Francis greets cardinals during the Mass marking the closing of the Year of Faith in St. Peter’s Square on November 24, the Solemnity of Christ the King.

“A Kind of Unpredictability”

That said, it is very interesting to read excerpts from the Cardinal Burke’s EWTN interview.

The interview starts with a discussion of the recent book by Burke, Divine Love Made Flesh: The Holy Eucharist as the Sacrament of Charity. Then there is a discussion of Pope Francis.

Raymond Arroyo, the EWTN news host, asks Burke about those who would like the Church to stop talking about abortion and gay marriage, and who say that Pope Francis explicitly urged Catholics to “stick to the essentials.”

Burke replies: “Well I, the Pope’s statement, it doesn’t state that. In fact it’s a text that’s not altogether easy to interpret. But my response is, what could be more essential than the natural moral law? In other words, these are, these acts that are always and everywhere evil, they’re the first commands of our conscience, to respect human life, to respect the integrity of the family, and to respect conscience. And so, to me the Pope can’t be saying, I can’t interpret that phrase of his, as saying that these are not essentials. I’m not exactly sure why he mentioned it. One gets the impression, or it’s interpreted this way in the media, that he thinks we’re talking too much about abortion, too much about the integrity of marriage as between one man and one woman. But we can never talk enough about that! As long as in our society innocent and defenseless human life is being attacked in a most savage way, I mean, it’s literally a massacre of the unborn, when this is extending now to those… to the aged, to those who are, have chronic illnesses, to those who are severely handicapped, and also to the whole question of creating human embryos artificially in order to destroy them, or in experimentation: we can never talk enough about that, because if we don’t get this straight, that human life, innocent and defenseless human life is an inviolable dignity, how are we going to understand anything else correctly with regard to care of the sick or whatever it might be?”

One senses here the confusion that Francis’s teaching has caused even in the Roman Curia. Burke acknowledges here that he “is not exactly sure” why Francis said he wished to speak about other matters besides abortion, marriage, euthanasia….

It seems clear that Francis has, indeed, said that concentrating solely on moral teachings, even fundamental ones, is not his deepest vision for the proclamation of the Gospel.

Francis wants to speak more about Christ and his person, life and mission, in order to draw all toward Christ, and through Christ, toward goodness, that is, toward love of and respect for the moral law.

Arroyo then asks about Francis’ plans to reform the Roma Curia. 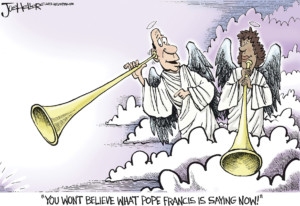 A biting satire on the utterances of Pope Francis.

“Well, it’s not altogether clear to me exactly what the result of the reforms is going to be,” Burke said. “The Pope has had meetings, they’re talking about the reorganization of the Roman Curia. But so far, I haven’t seen anything concretely of what that will be.

“So I can’t imagine that somehow the Roman Curia is going to take on a completely different figure. It just doesn’t make sense.”

Again, one senses here what must be a widespread sense among the officials in the Roman Curia about what Francis may choose to do in his attempt to “reform” the Curia. 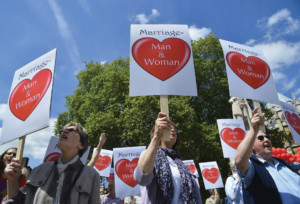 A demonstration in favor of traditional marriage between a man and a woman.

Arroyo then says, “Speaking of the papal household, Archbishop Georg Gänswein is quoted in a German magazine. He said ‘It is an…’ — and he is talking about being the personal secretary to both the former Pope, Pope Benedict, as well as Pope Francis — and he said this: ‘It is an ache, finding my way with the new role. I have the impression I live in two worlds. I wait every day for another innovation, what will be different.’ Have you ever experienced any of that?”

And Burke replies: “Well, there is, I mean, I don’t think this is anything that isn’t clear to everybody, there is a kind of unpredictability about life in Rome in these days.

“It seems to be a question of a certain style, and every Holy Father is different. So it is quite distinct from Pope Benedict who was, who attended very much to a certain protocol, and also to a certain discipline of schedule and so forth, so there is an element of that, that’s clear.”

Again, one sees in these words a mood that may be shared by many in Rome today, that there is “a kind of unpredictability about life in Rome in these days.”