The 25th of December Pagan Feast or Patristic Tradition?

The 25th of December Pagan Feast or Patristic Tradition?

Christians celebrate the birth of Jesus on December 25. But that date was already popular among the Romans as the “birthday of the sun.” So, was Jesus actually born on December 25? Ancient tradition says “yes.” 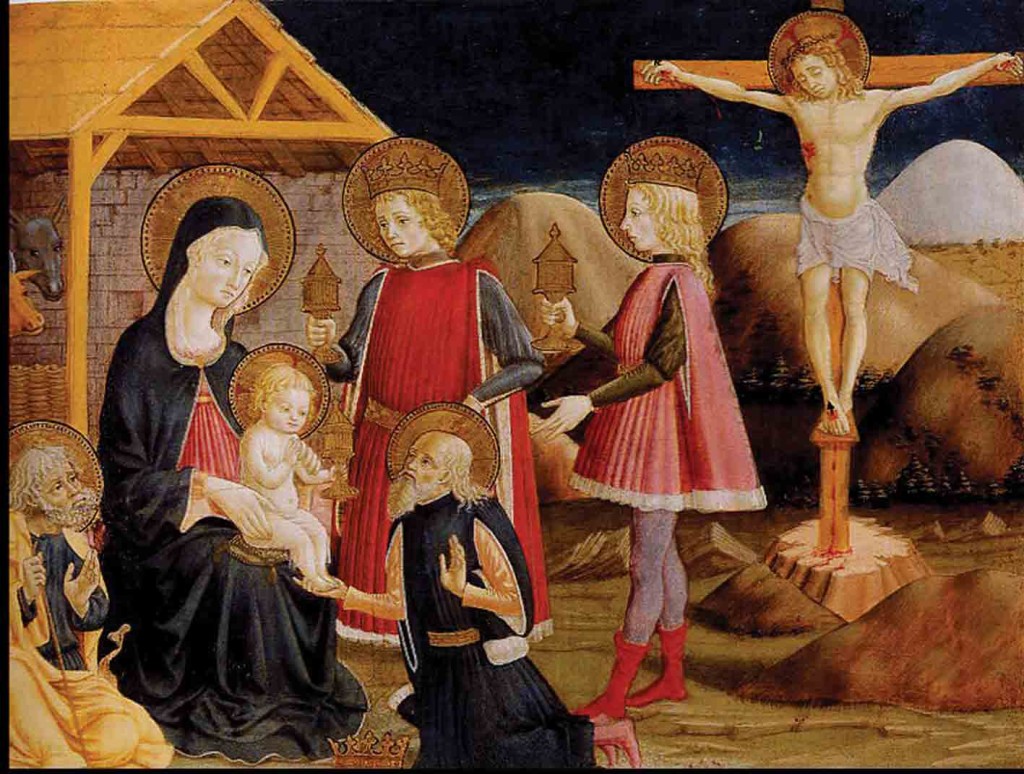 The importance of Christ’s death in correlation to his birth is revealed by another ancient tradition: that Christ was conceived and crucified on the same calendar day.

For centuries the Church has commemorated the birth of Christ on December 25. Many Christians today, however, do not believe this feast marks the actual anniversary of Christ’s birth. As G.K. Chesterton once wrote, “Anyone thinking of the Holy Child as born in December would mean by it exactly what we mean by it: that Christ is not merely a summer sun of the prosperous but a winter fire for the unfortunate.”1 While such imagery may reflect a spiritual truth, it leaves much to be desired. The question still remains: how did the 25th of December become Christmas Day? 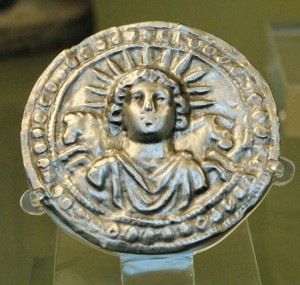 The most common theory today dates the liturgical designation back to the fourth century. Both medieval and modern sources claim that the early Church during the 300s solemnized the Nativity on this particular day to counter the pagan feast of Natalis Invicti, “Birth of the Unconquerable One.”2 According to the Philocalian Calendar of 354 a.d., December 25 memorialized the birth of the deity Sol Invictus, the “Unconquerable Sun.” This aptly coincided with the Roman celebration of the winter solstice, the day in which the sun’s apex is closest to the horizon.3 The feast, moreover, fell right within the broader context of Saturnalia, a mid-December revelry in honor of the god Saturn, which lasted a month and included — among other festivities — gift-giving, a common practice in our present holiday season.

Most historians have concluded that the Church decreed that Christmas would be held on December 25 in order to extirpate — or rather baptize — the Roman festival. The ecclesial authorities would have had good reasons for doing so, as many of these pagan holidays enticed the Christian faithful to participate. A Syriac manuscript from the 1100s records the dilemma: “It was a custom of the Pagans to celebrate on the same December 25 the birthday of the Sun, at which they kindled lights in token of festivity. In these solemnities and revelries, the Christians also took part.

“Accordingly, when the doctors of the Church perceived that the Christians had a leaning to this festival, they took counsel and resolved that the true Nativity should be solemnized on that day.”4 Thus, the day honoring the god of the sun would soon be eclipsed by the Son of God; or, as St. Augustine put it, “We hold this day holy, not like the pagans because of the birth of the sun, but because of him who made it.”

The early Church eventually formalized Natalis Christi in 350 a.d. under Pope Julius I.

Though the pagan festivities may have served as a catalyst, the selection of this feast for this day was neither sudden nor arbitrary. In fact, December 25th had already enjoyed preeminence among Christians as the birthday of Christ long before the papal decree. According to Pope Benedict XVI, the first person to clearly assign Christmas to its current feast day was St. Hippolytus of Rome.5 In his Commentary on Dan­iel, which was written c. 204 a.d., St. Hippolytus wrote: “For the first advent of our Lord in the flesh, when he was born in Bethlehem, was December 25th, a Wednesday, while Augustus was in his forty-second year, but from Adam, five thousand and five hundred years.”6 Writing roughly 150 years before any known records which designate December 25th as Natalis Invicti, Hippolytus gives no mention of the Roman feast. It would seem the Christian use of the date was quite independent from all pagan solemnities. Where then did he get this date?

In order to answer this question, many scholars, including Louis Duchesne, Thomas Talley, and Andrew McGowan, believe one must first examine two earlier traditions referenced by the Church Fathers.7 The first of these is the date of Christ’s passion and death. Based on the details given in the Gospels, Christ is believed to have died in the middle of the Jewish month of Nissan.

According to the calculations of Tertullian, a contemporary of Hippolytus, this day would have been in late March by Roman standards.

Tertullian wrote that Christ suffered, “under Tiberius Caesar, in the consulate of Rubellius Geminus and Fufius Geminus, in the month of March, at the time of the Passover, on the eighth day before the calends of April [March 25th], on the first day of unleavened bread, on which they slew the lamb at even, just as had been enjoined by Moses.”8 This assignment of “Good Friday” to March 25th is found not only in Tertullian, but also in other patristic sources.9

The importance of Christ’s death in correlation to his birth is revealed by another ancient tradition: that Christ was conceived and crucified on the same calendar day. It was a common belief that the Messiah fulfilled his mission on the anniversary of its inception.10

St. Augustine is one of the writers who attests to this. He wrote, “For he [Jesus] is believed to have been conceived on the 25th of March, upon which day also he suffered; so the womb of the Virgin, in which he was conceived, where no one of mortals was begotten, corresponds to the new grave in which he was buried, wherein was never man laid, neither before him nor since.”11 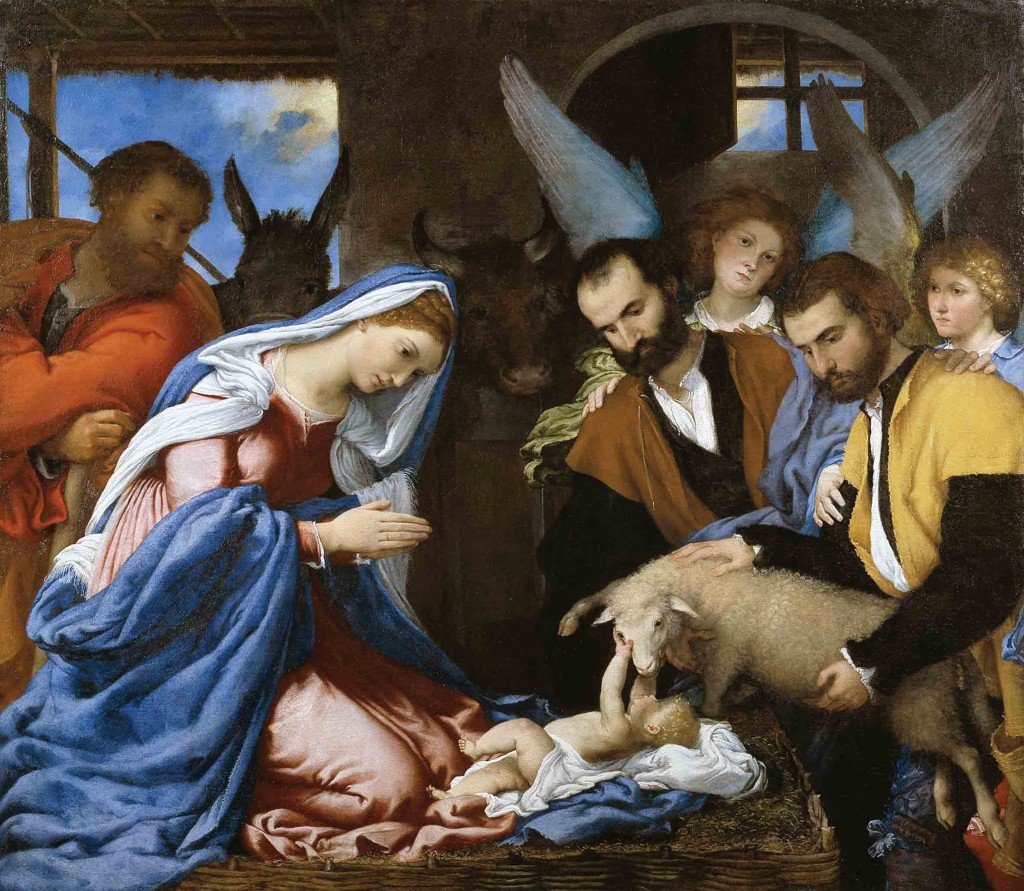 The Nativity (1530) by Lorenzo Lotto, from the Civic Picture-Gallery Tosio Martinengo in Brescia, Italy.

According to this tradition, the Incarnation took place on March 25th, which just happens to be the Solemnity of the Annunciation in the Catholic liturgy. Precisely nine months later, the approximate time of human gestation, is December 25th and, therefore, the traditional date for the birth of Jesus. Based on this reasoning, the early Church commemorated the feast on this appointed day.

Thus, the common criticism of the celebration of Christmas on December 25 made by some Christian sects — i.e., that the date of Christmas is another trapping of paganism in which the Catholic Church has gone astray — is not based on fact.

The choice of December 25th as the liturgical feast for Christ’s birth is far more likely to have been an independent, patristic tradition of early Christianity. The fact that it shares the same day as the birth of the sun god seems more based on the Roman calculation of the winter solstice. The pagans observed the birth of their deity when the “great light” was at its lowest point of the year, calculated as December 25.

But is it not also fitting that Christ, the prophesied “sun of righteousness” (Mal 4:2), who came in great lowliness, should have been born on this day? Was not the sun eclipsed at his death?

Genesis tells us that God created the celestial bodies “for signs and for seasons” (Gen 1:14). It was due to this very belief that the Magi from the East followed a star and found the Christ Child on Epiphany.

While the date of the Nativity remains a subject of debate, it is by no means essential to the mystery itself. The focal point is not so much when it occurred but that it occurred. At Christmas, we reflect upon one simple truth: that God, out of his unsurpassable love, sent his only-begotten Son to redeem our fallen race. Life had seemed as bleak as Bethlehem on a cold winter’s night, that is, “until he appeared, and the soul felt its worth.”