Two views of the encounter – President Obama and Pope Francis

Two views of the encounter – President Obama and Pope Francis 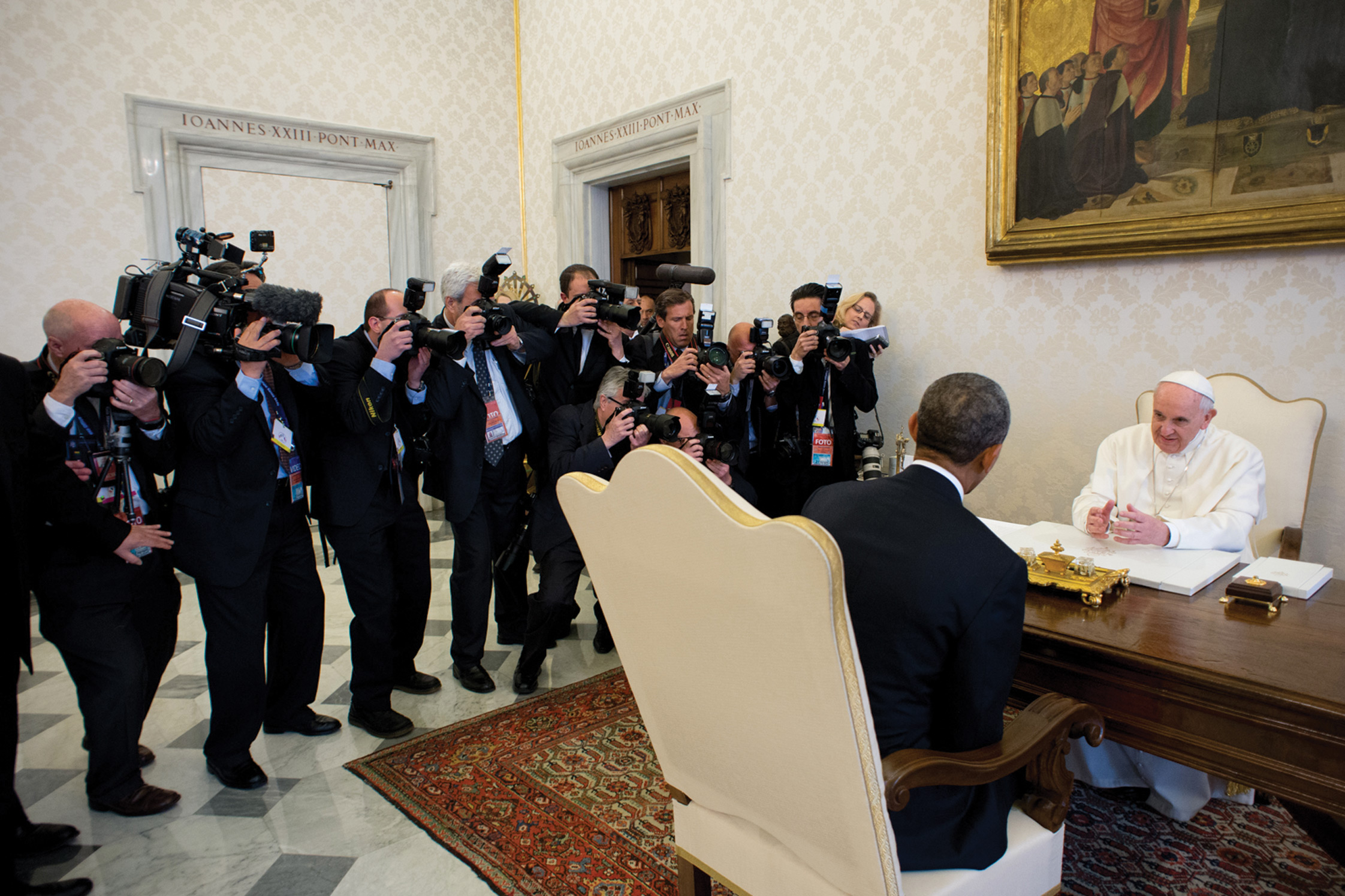 Pope Francis received the US President on March 27 for 52 minutes. What did the two men discuss? Stories differ..

Following the 52-minute meeting (it went almost twice as long as expected) between Pope Francis and US President Barack Obama on March 27, two conflicting versions about what was said emerged, the President’s and the Vatican’s. And even several days after the meeting, it is still not clear which version more closely corresponds to the truth, as actual details about the meeting still remain sketchy.

The two versions contrast most with regard to whether Pope Francis brought up in an emphatic way the issue of “religious freedom” for Catholics in the United States, where a new health care law promoted by President Obama requires Catholic businesses to pay for policies which include things they regard as immoral, like contraception. Did the two men — or did they not — discuss the threat to religious freedom for Catholics posed by this new law?

In a press conference after the meeting, President Obama said: “In terms of domestic issues, the two issues that we touched on — other than the fact that I invited and urged him to come to the United States, telling him that people would be overjoyed to see him — was immigration reform.” [Editor’s note: Yes, there is an inconsistency here; the president did say “two issues” and then mention only one.] The President continued: “And as someone who came from Latin America, I think he is very mindful of the plight of so many immigrants who are wonderful people, working hard, making contributions; many of their children are U.S. citizens, and yet they still live in the shadows, in many cases have been deported and are separated from families. I described to him how I felt that there was still an opportunity for us to make this right and get a law passed.”

Then the President said: “And he actually did not touch in detail on the Affordable Care Act. In my meeting with the Secretary of State, Cardinal Parolin, we discussed briefly the issue of making sure that conscience and religious freedom was observed in the context of applying the law. And I explained to him that most religious organizations are entirely exempt. Religiously affiliated hospitals or universities or NGOs simply have to attest that they have a religious objection, in which case they are not required to provide contraception, although employees of theirs who choose are able to obtain it through the insurance company.”

So, the President gave the impression that the issue of religious freedom was hardly mentioned by the Pope, who focused rather on immigration, and was discussed only “briefly” with the Pope’s top advisors. So he downplayed the importance of this issue during their meetings.

The brief Vatican press communiqué released after the meeting, unfortunately, is not detailed enough to be the basis for a final judgment, but nevertheless, there is a different emphasis in this statement. The communiqué says: “In the context of bilateral relations and cooperation between Church and State, there was a discussion on questions of particular relevance for the Church in that country [i.e., in the US], such as the exercise of the rights to religious freedom, life and conscientious objection, as well as the issue of immigration reform.”

Clearly, this official communiqué — and the words are always chosen with considerable care in these statements — is telling us that the emphasis in the meetings was on the first point, “questions of particular relevance for the Church in that country, such as the exercise of the rights to religious freedom, life and conscientious objection,” and that, after discussing these major concerns, a second concern ( the words “as well as” make this clear) was also discussed, that is, immigration.

What else do we know about the contents of these meetings?

We know that “international themes” (as the Vatican press release phrases it) were also discussed.

So, world issues. What might these “themes” have been?

It seems likely that they included two important ones: (a) Ukraine and the confrontation there between Russia and the Western powers, and (b) Syria, where a civil war has been raging for more than two years and where US bombing raids against the Assad regime were scheduled to begin in early September, until Pope Francis called for a world day of prayer and fasting for peace. If the “themes” included Syria, they would, by extension, have included Syria’s neighbors — Lebanon, Turkey, Iraq, Iran, Israel, Saudi Arabia, Egypt — in general, the entire Middle East, as it is known that the Pope is concerned about the shrinking presence of Christians throughout the region, and as Francis is planning a trip to Jordan, Israel, and the occupied territories from May 24-26, just two months from now (the official schedule was just announced the day before the meeting with Obama).

We also know what type of solution was discussed: “It was hoped that there would be respect for humanitarian and international law and a negotiated solution.” To put it succinctly: that compromise can be reached (“ne­go­tiated”) without war, in all cases.

Will Obama Learn from Francis?

“Given his great moral authority, when the Pope speaks it carries enormous weight,” Obama said in an interview with the Italian daily Corriere della Sera published ahead of his papal visit. “He can cause people around to the world to stop and perhaps rethink old attitudes and begin treating one another with more decency and compassion.”

Will President Obama himself “stop and perhaps rethink old attitudes” following his meeting with Pope Francis? We do not know. But, at the end of the meeting, during a time when gifts were exchanged — Obama gave Francis a packet of seeds from the White House garden, to be planted in the Vatican Gardens at Castel Gandolfo, outside of Rome, where the Vatican has a small farm which supplies milk, eggs, vegetables and fruit for the papal table — there was a striking moment. 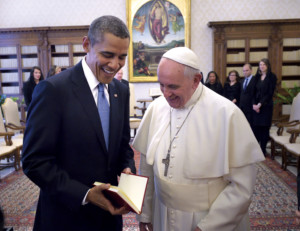 US President Barack Obama accepts a gift from Pope Francis.

Francis handed Obama a copy of his apostolic exhortation on “The Joy of the Gospel” (Gaudium evangelii), published on November 24 (the single most important written product of the first year of Francis’ pontificate).

“You know,” Obama told Francis, “I actually will probably read this when I’m in the Oval Office, when I am deeply frustrated, and I am sure it will give me strength and will calm me down.” “I hope,” the Pope responded.

If Obama reads the Pope’s words, what will he find?

He will find a sharply critical analysis of modern economic activity. “We have created new idols,” Francis says. “The worship of the ancient golden calf has returned in a new and ruthless guise in the idolatry of money and the dictatorship of an impersonal economy lacking a truly human purpose.” (Paragraph 55)

But Pope Francis is also a powerful defender of the unborn. And, in his famous Paragraph 213, he makes this crystal clear: “Among the vulnerable for whom the Church wishes to care with particular love and concern are unborn children, the most defenseless and innocent among us… Frequently, as a way of ridiculing the Church’s effort to defend their lives, attempts are made to present her position as ideological, obscurantist and conservative. Yet this defense of unborn life is closely linked to the defense of each and every other human right. It involves the conviction that a human being is always sacred and inviolable, in any situation and at every stage of development.”

So, if Obama does sit down in the Oval Office to read this text of Pope Francis, he will find much to ponder — perhaps enough to cause him to “rethink old attitudes.”

Here is the complete communiqué published by the Vatican:

This morning, 27 March 2014, the Hon. Barack H. Obama, President of the United States of America, was received in audience by His Holiness Pope Francis, after which he met with His Eminence Cardinal Pietro Parolin, Secretary of State, and Archbishop Dominique Mamberti, Secretary for Relations with States.

During the cordial meetings, views were exchanged on some current international themes and it was hoped that, in areas of conflict, there would be respect for humanitarian and international law and a negotiated solution between the parties involved.

In the context of bilateral relations and cooperation between Church and State, there was a discussion on questions of particular relevance for the Church in that country, such as the exercise of the rights to religious freedom, life and conscientious objection, as well as the issue of immigration reform. Finally, the common commitment to the eradication of trafficking of human persons in the world was stated. 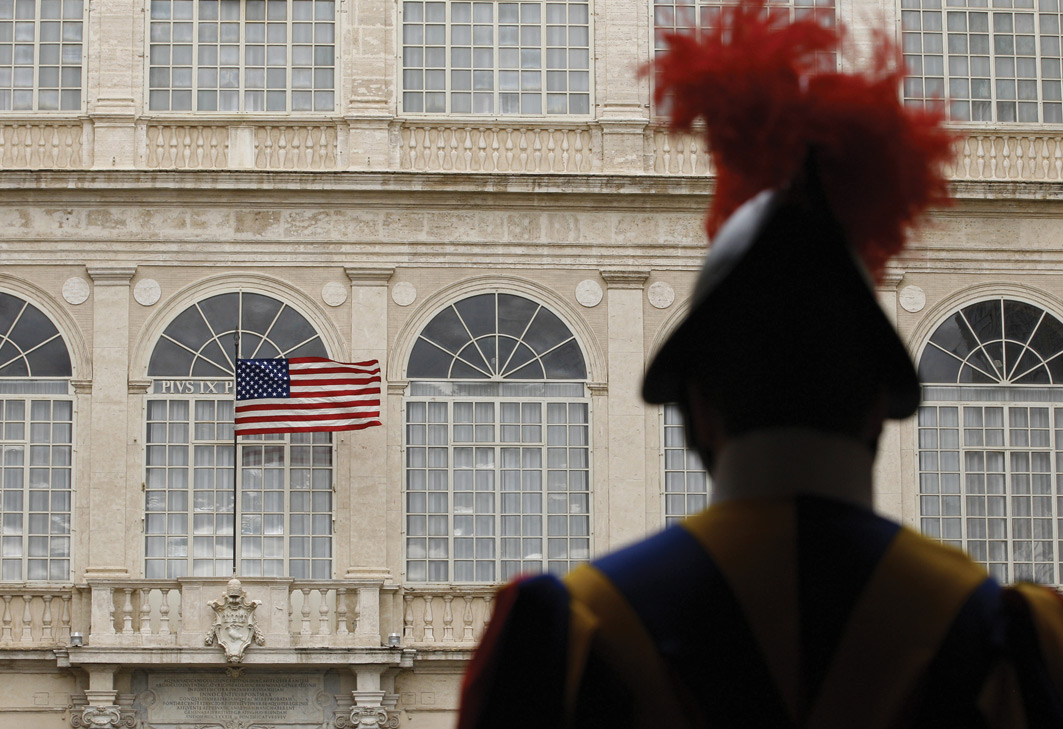 A Swiss Guard waits as a US flag flies above San Damaso Courtyard during President Obama’s official visit to Pope Francis.