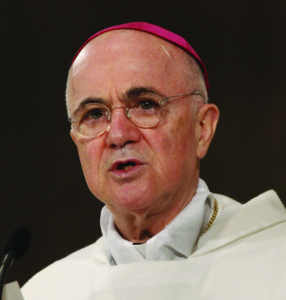 For our tenth “Person of the Year,” we chose a man of great integrity who holds one of the most delicate diplomatic posts in the world as the ambassador of Pope Francis to the United States of America.

Archbishop Carlo Maria Viganò, by all accounts, did not seek this post, which was entrusted to him originally by Pope Benedict in the troubled circumstances of the “Vatileaks” affair toward the end of Benedict’s pontificate. But, when Pope Benedict confirmed personally to Viganò that he wished Viganò to take up a mission in Washington that would be “providential” for the Church and the world, Viganò accepted.

And in the years since, he has been the papal nuncio in America, Viganò has carried out his duties with unfailing calm and goodwill, listening to the concerns of all and “building bridges” in many both visible and hidden ways. For this reason, we are pleased to honor him as one of our “Top Ten” persons of 2014.

Carlo Maria Viganò, born on January 16, 1941 — so this January it is appropriate to wish him a belated “Happy Birthday” on turning 74 — became the Apostolic Nuncio to the United States on October 19, 2011.He had served as Secretary-General of the Governorate of Vatican City State for just a little more than two years, from July 16, 2009 to September 3, 2011.

Born in Varese, in northern Italy, Viganò was ordained a priest on March 24, 1968, at the age of 27. He studied law and earned a doctorate in utroque iure (both canon and civil law). In addition to his native Italian, he learned to speak French, Spanish and English.

He entered the diplomatic service of the Holy See in 1973, and worked in missions in Iraq and Great Britain. For 11 years, from 1978 to 1989, he held posts at the Secretariat of State, and thus came to know the Vatican well. He was then named Special Envoy and Permanent Observer of the Holy See to the Council of Europe in Strasbourg on April 4, 1989.

After his mission to Nigeria, Viganò was assigned to functions within the Secretariat of State as delegate for Pontifical Representations, making him the personnel chief for the Roman Curia as well as for Vatican diplomats. This means that he understood very well who was working in the Curia, and what their backgrounds and capacities were. He served in this role until he became Secretary General of the Governorate of Vatican City State on July 16, 2009. In that role he established centralized accounting procedures and accountability for cost overruns that helped turn a $10.5 million deficit for the city-state into a surplus of $44 million in one year.

Viganò came to be known as a fearless defender of the rights of the weak and poor, in the Vatican itself, in the Church, and in the world in general. On one occasion he spoke out sharply against global processes — a certain style of “globalization” — which may diminish human dignity and even deny the sacredness of human life. As Secretary General of the Governorate, he spoke at the General Assembly of Interpol in November 2010, saying that “the issue which needs to be faced is one closely linked to the process of globalization which is now affecting every aspect of the life of nations, peoples and individuals, and is accompanied by political and economic changes which are often uncontrolled and even uncontrollable.” He added: “While it is true that globalization offers opportunities for development and enrichment, it is also true that it can cause increased poverty and hunger… Nor can we underestimate the fact that the fruits of technological and scientific progress can, for all their enormous benefits to humanity, be used in a way that clearly violates the order of creation, even to the point of denying the sacredness of life and stripping the human person and the family of their natural identity.”

Viganò’s fearless work provoked opposition, and Pope Benedict was persuaded to transfer him out of the Vatican to the US. Vigano sees being Apostolic Nuncio to the United States as an “important, vast and delicate” task; he was grateful to Pope Benedict for entrusting him with the mission and he felt called to renew his “trust in the Lord, who asks me to set out again.” Being an Apostolic Nuncio in the US, he has said, is “a call to know this people, this country and come to love them.”

For all that he has done throughout his career, for his example of courage and fidelity, and for the calm and gracious way that he has handled his duties in America, we honor Archbishop Viganò as one of our “Top Ten” persons of the year.