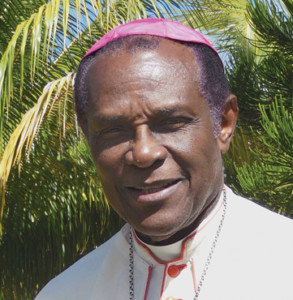 He was born as one of the nine children in Roseau, Dominica, in 1933. He was ordained a priest in 1956. He studied at St. Francis Xavier University in Nova Scotia, Canada, where he got a degree in Adult Education in 1963, gained a Masters Degree from the University of Notre Dame in Indiana in Sociology and Anthropology in 1967, and completed postgraduate studies in Sociology at the University of Bradford in Yorkshire, England in 1970. While studying in England he ministered to the Dominican immigrant community in Bradford and, aware of their difficult economic situation, helped them organize a credit union. This seeded the Credit Union movement in the London Metropolitan area and in the UK in general, a legacy that people from the Dominican Republic in the UK are thankful for and are justly proud of.

After his studies, Felix served as the Principal of the Roman Catholic High School in Dominica from 1972–1975, which was then having very serious racial problems because of the Black Power movement; he was successful in solving the problems.

His success in resolving the problems at the Academy, and his humility, keen intelligence and diplomacy, together with his diligence and penchant for effective organization, led to his appointment as Associate General Secretary of the Caribbean Conference of Churches from 1975–1981.

And in 1981, Father Felix was elevated to the position of Metropolitan Archbishop of the Province of Castries, St. Lucia, responsible for all Catholic dioceses in the Windward and Leeward Islands.

He was professor of Sociology at the University of the West Indies at St. Augustine (Trinidad and Tobago) for many years.

He served as President of the Antilles Episcopal Conference from 1991–1997 and President of the Caribbean Conference of Churches from 1981–1986. In addition to the administration of the Catholic Church in St. Lucia, Archbishop Felix was responsible for 33 Primary Schools, two Secondary Schools, one girls’ Vocational School, two homes for the elderly, one shelter for the homeless and one orphanage for young children.

In 2006, Felix was attacked and grabbed on the neck by a man with a knife, after delivering an evening sermon at the Cathedral Basilica of the Immaculate Conception in Castries. He miraculously escaped death.

After his retirement in 2008, Felix moved back to Dominica where he continues his ministry to the poor in the villages of the island.

He was awarded the Order of the British Empire by Queen Elizabeth II at Buckingham Palace, London in 1992. He was also awarded the Dominica Meritorious Service Medal in 1999. He received the St. Lucia Medal of Honor in 2002. For his visionary leadership, his selflessness and humility, and his dedication to the poor, the Dominica Academy of Arts and Sciences in 2008 honored him. In his 57 years as a priest he has been addressed mainly as “Father Felix,” even after he was made a bishop.

Pope Francis said in an acknowledgment regarding Felix that the decision to make him a cardinal was due to his “long and dedicated service to the Holy See and to the Church.” It is the first time that an archbishop from the English-speaking Caribbean has been made a Cardinal.

“It gives a zest to the whole Church in the Caribbean and recognition to the Episcopal Conference which I have served as president for three times,” Felix said. “This appointment is also a great sign of appreciation for the tireless and dedicated pastoral ministry of all our Bishops and for the Church of the Caribbean.”

Also, the government of St. Lucia acknowledged his sterling contribution to the nation and the region in the area of ecumenism, regional integration, and human development during his 27 years as Archbishop of Castries.