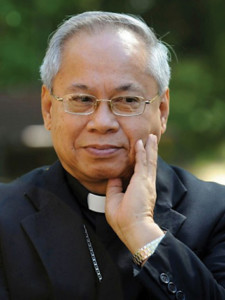 Orlando B. Quevedo. Archbishop of Cotabato.

Filipinos, especially from the southern island of Mindanao, have expressed hope that the elevation of Cardinal-designate Orlando Quevedo of Cotabato to the College of Cardinals will help hasten the peace process in the conflict-plagued southern region.

One such hope was expressed by Bishop Martin Jumoad of the city of Basilan. “[The cardinal-designate’s] voice will surely have weight and he can guide the peace talks to be pro-God, pro-people, devoid of selfish interest, but only for the welfare of the whole people of Mindanao,” Bishop Jumoad told ucanews.com.

The cardinal-designate was one of two Asian prelates named to the College of Cardinals by Pope Francis. Also named was Korean Archbishop Andrew Yeom Soo-jung of Seoul, 70. The Church outside Rome was well represented in Francis’ new appointments, with five from Latin or Central America, two from Africa, two from Asia and one from North America.

In the Philippines, Cardinal-designate Quevedo is known for being at the forefront of peace efforts in the southern Philippines over the past two decades.

In a 2003 paper titled “Injustice: The Root of Conflict in Mindanao,” Quevedo said the root cause of the Moro rebellion in the southern Philippines was “injustice” to the Moro people’s “identity, political sovereignty, and integral development.”

“Through the years I have gained some understanding of the Moro viewpoint that has significantly influenced, even altered, my Christian viewpoint… being with Muslim students and professionals for many years,” Quevedo wrote.

The Catholic bishops’ conference welcomed the elevation of Quevedo, saying it is proof of the strength of the Catholic faith in Mindanao and “Cardinal Quevedo is its living testimony.” Quevedo will be the 8th Filipino to be elevated to the College. Born in the northern province of Laoag, he served two terms as president of the bishops’ conference. He was ordained in June 1964, and appointed bishop of the Prelature of Kidapawan in Mindanao by Blessed John Paul II in July 1980. He championed justice and peace issues during the martial law years in the 1970s and 1980s. A member of the Oblates of Mary Immaculate, he served as secretary-general of the Federation of Asian Bishops’ Conferences from 2005 to 2011. He was named archbishop of Nueva Segovia in the northern Philippines in March 1986 and appointed archbishop of Cotabato two years later.