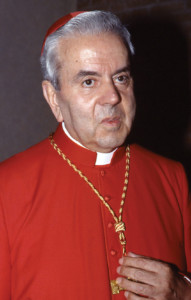 On the afternoon of November 24, at the altar of the Cathedral of the Vatican Basilica, Pope Francis presided over the rites of the last “Commendatio” and “Valedictio” at the conclusion of the funeral for Cardinal Fio­renzo Angelini, President Emeritus of the Pontifical Council for Healthcare Workers, who passed away on Saturday, November 22. He was 98. In the College of Cardinals, he was the only one born in the city of Rome.

The funeral Mass was celebrated by the Dean of Cardinals, Angelo Sodano, whose homily we publish below. There were approximately 40 concelebrants, including Cardinal Lozano Barragan and Archbishop Zygmunt Zimowski, Angelini’s successor at the Holy See’s Council for the Pastoral Care of Health Workers. Also attending were the Cardinal Protodeacon Renato Martino, the substitute Secretary of State, Archbishop Giovanni Angeo Becciu, with assessor Monsignor Peter Wells, the Secretary of the Pontifical Council, Jean-Marie Musivi Mupendawatu. The rite was conducted by the pontifical liturgical celebrations office and sung by the Sistine Chapel choir. Others present included the Cardinal’s relatives and the Benedictine Sisters of Reparation of the Holy Face, with their Superior General, Maurizia Biancucci. The Cardinal wished to be buried in their motherhouse’s chapel in Bassano Romano, so he could rest near the order’s founder, the Venerable Abbot Ildebrando Gregori.

The time has come to bid a last farewell to our dear departed Cardinal Fiorenzo Angelini. In this moment we are enveloped in grief, as the Church of Rome has lost one of Her most beloved sons. For 74 years, from 1940 as a young Roman priest to the present, he was always a generous pastor who served the community of Rome, first as a parish priest in the suburbs, and later as bishop and cardinal. Now and then he would remind us that, as an auxiliary, he participated in the Second Vatican Council, and that memory was always present in his spirit.

The Roman Curia comes together, too, at this time, to remember this great man of the Church, who, in the face of the difficult times in which he was called to work, made Pope Pius XII’s motto his own: “Action, not complaint!” At times he would repeat the words of St. Augustine: “We are our times. Our actions and behavior dictate how the times we live in will be!”

Here today, around the Lord’s altar, many of his associates are gathered, especially those who worked with him in the vast field of the lay apostolate, and particularly in the pastoral care of health workers. Actually, he consecrated many years of his life to taking care of the sick, ever since the time in 1956 when Pope Pius XII called him to be the auxiliary bishop of Rome, giving him the special responsibility of spiritual assistance for the infirm of the diocese. He continued on in this service, on a global scale, when, in 1985, Pope John Paul II called him to lead the Pontifical Council for Healthcare Workers. His name will forever be tied to this important mission of charity in the Church! 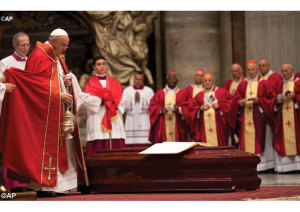 Pope Francis at the Cardinal’s funeral.

Of course, a veil of grief covers us today, as we become separated from such a dear friend. We are comforted, though, by the Word of God, as proclaimed to us just moments ago: the Holy Spirit addresses the Apostle John: “Blessed are the dead who die in the Lord… They will rest from their labor, for their deeds will follow them.” (Revelation 14:13) To die in the Lord: this is the most beautiful definition of Christian death, as well as the greatest comfort for every minister of God.

Today’s Gospel reminds us of the Bea­titudes promised by the Lord to His disciples. Today, especially, in our dear Cardinal’s name, we wish to implore the Beatitude promised to the merciful: “Blessed are the merciful, for they shall obtain mercy” (Matthew 5:7).

Even in his last years of life, our Cardinal was always capable of finding new paths and initiatives for helping the poor and the suffering. Witnesses to this are the Sisters of Reparation of the Holy Face of Jesus, in whose home in Via della Conciliazione he lived during his last period of life, and who attended to him with so much love.

My brethren, I invite you to entrust the blessed soul of our beloved Cardinal to the Most Holy Virgin Mary. As early as his seminary years, he loved referring to Mary with this well-noted invocation: “Mater mea, fiducia mea” (“My Mother, my Confidence”). May this Mother of Confidence now accompany him into Paradise, with all the angels and saints of heaven! (L’Osservatore Romano, November 26, 2014)