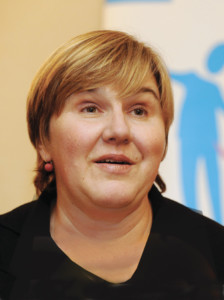 On December 1, Croatia took a stand against the growing worldwide tide in favor of the legal recognition of homosexual marriage. One of the leaders against such recognition was Zelja Markic, head of the citizens’ group “In the Name of the Family,” which helped organize voters against the initiative. For her role in recognizing that the fundamental characteristic of marriage, as all human societies up until now have always believed, is the union of two people of opposite sexes, and in winning support for that traditional position against the power and influence of the European Union, we have decided to honor Zelja Markic as one of our “Top Ten” people of 2013.

Despite what has been characterized as “a relatively tolerant climate toward homosexuals,” same-sex marriage will not be recognized in Croatia following a referendum on December 1 which will define marriage in Croatia’s Constitution as being “between a man and woman” and which passed by a 2-to-1 margin despite great media pressure against passage.

The initiative received support from the Croatian Democratic Union (the main opposition party) and the Catholic Church, as well as from Orthodox, Protestant, Muslim, and Jewish groups. Nearly 90 percent of Croatia’s population is nominally Catholic.

But Croatian President Ivo Josipovic told media he planned to vote “No,” saying, “We don’t need this kind of referendum.” He said: “Defining marriage [as being] between a man and a woman doesn’t belong to the constitution” and “A nation is judged by its attitude toward minorities.”

Still, the rights-watch group, European Dignity Watch (EDW) ,said the referendum was “a clear and simple sign of the democratic process” at work. “All the more impressive given the intense pressure that the media and government officials, including the Prime Minister and Education Minister, put on organizers of the referendum and their allies,” said EDW’s director Sophia Kuby.

Markic’s group collected 750,000 signatures in only two weeks in May, about 20 percent of voters in Croatia, twice as many as the minimum needed to bring about a referendum. For Markic, this was an important step in the development of Croatia’s democracy: “This is the first referendum in Croatia to be called for and organized by voters since independence 23 years ago (in 1991).” 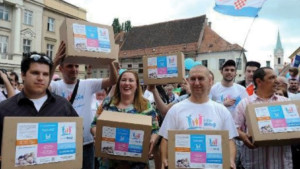 Supporters of the referendum after the victory.

For the first time in modern Croatia, “the citizens will decide what’s important to them,” Markic said. It was a matter of having “a Croatia in which same-sex couples cannot adopt children,” something which runs against Croatian culture, identity and values, Markic said in an interview with the Catholic paper Glas Koncila.

Numerous left-wing organizations were alarmed by the initiative. As a result, they jointly launched the “Citizens Vote Against” alliance to mobilize voters to stop the amendment. The Soc­ial Democratic-led government was strongly opposed. In June, the prime minister’s wife demonstratively took part in Zagreb’s 12th gay pride parade.

On December 1, more than 65% of Croatian voters said “yes” to the referendum question: “Do you agree that marriage is matrimony between a man and a woman?” And the result also received support from 104 out of 151 parliamentarians.

The country’s constitution must now be amended to define marriage as being exclusively between a man and a woman.

An internet commenter on a web site said: “I watched this campaign from the beginning to the end and the pro-homosexual marriage side shot themselves in the foot by playing incredibly dirty. They had the entire spectrum of NGOs on their side, all of the major media, and the government as well as a chunk of celebrities, minus sports athletes who took the pro-family side. The pro-gay side kept screaming that anyone who sided against them was a homophobe, fascist, primitive, intolerant, full of hatred, Nazi, etc. Call people enough names and insult their intelligence and they will react. The real winner here is the Croatian people who have shown that they could overcome state and non-state propaganda even when the majority of forces lined up against them.”

Another wrote: “I don’t think there is a plurality in favor of gay marriage anywhere in the world. There is not even 100% support for gay marriage among those who identify as homosexual. The media and governmental push to create a new class of ‘victims’ deserving special rights must be accomplished by deception. The Croats have not yet submitted.”

And a third said: “Hopefully Ireland will follow suit in the next year or so, when the current government tries dishonorably to do the opposite to the Irish, by trying to enshrine the abomination known as ‘gay marriage’ into the constitution.”

—Inside the Vatican staff