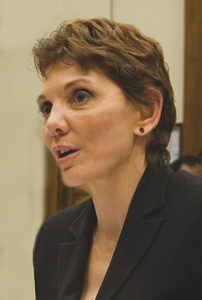 China’s one-child policy, after more than 40 years, is beginning to end. After four dec­ades and the deaths of millions of children through abortion (a majority of them girls), the government has loosened — though not ended — its cruel “one-child” policy. The change, rumored in November, was announced at the end of December. The change is in part due to many years of work by Reggie Littlejohn of California (USA), a graduate of Yale Law School and founder and president of Women’s Rights without Frontiers. For her tireless efforts on behalf of the women of China, we honor her as one of our “Top Ten” people of 2013.

“The Chinese Communist Party boasts that it has ‘prevented’ 400 million births through its One Child Policy,” Littlejohn said recently. “This is greater than the entire population of the Unit­ed States. China has approximately 13 million abortions per year. That’s 35,616 abortions a day or 1,484 per hour. Many of these are forced, and most of those births ‘prevented’ involve female fetuses.” The Chinese leadership on December 28 announced changes to the one-child policy that will allow couples to have two children if one of the parents was an only child. Currently, both parents must be sole children to be eligible for a second child. The easing of the policy is expected to go into effect in 2014.

It wasn’t until Littlejohn, a highly successful American attorney, found herself nearly on her deathbed that she felt drawn to pray for women who were “worse off” than she was. Little­john shared the dramatic story of her journey to become one of the most recognized voices in the battle against China’s oppressive policy with Peter Baklinski of LifeSiteNews.com.

Twenty years ago, Littlejohn said, she was more concerned with advancing her law career than with the plight of women on the other side of the world. But it was during this time that she represented a Chinese woman seeking political asylum in the USA.

“She had been forcibly sterilized,” Littlejohn said. “At the time, I knew that China had a one-child policy, but I did not realize that it was currently enforced through forced abortion, forced sterilization, and even infanticide, the killing of infants.”

Littlejohn said that the Chinese woman’s sufferings were “gripping” to her because of the pain she herself had experienced at the loss of two babies through miscarriages.

Then, in 2003, Littlejohn suffered an infection that almost took her life. She had discovered lumps in both her breasts and opted to have them surgically removed. But the surgery and new implants caused a staph infection that doctors could not control.

Littlejohn’s life hung in the balance. Doctors were compelled to remove one of her new implants and pump medication directly into her heart. The 10-week treatment worked, but Littlejohn was left a broken woman, a shell of her former self.

“I went overnight from somebody who was a supervising attorney in a major law firm to someone who was flat on her back crying out to God to spare my life,” she said.

It was during this time that Littlejohn began to pray for the women of China. The severity of the infection incapacitated Littlejohn for five years. During her recuperation, she became “almost ob­sessed” with tracking down information on the one-child policy.

The emerging picture was  “horrific” and “repugnant.”

“First of all, you’ve got a government, a brutal totalitarian regime that regards women’s bodies as being the property of the state and who exercises a reign of terror over the entire nation, extending its arm from Beijing to every womb in China to declare life or death over that,” she said. “Then you’ve got the forced abortion that follows from that up until the ninth month of pregnancy. Sometimes the forced abortions are so violent that the women themselves die along with their full-term babies. Then you have forced sterility.”

Littlejohn also realized that a “coercive birth limit” in a culture that favored males resulted in the “unintended consequence” of selective abortion of baby girls.

She saw that China’s gender imbalance of 37 million more men than women resulted in a thriving industry that trafficked women and girls for sex. “What are you going to do with 37 million frustrated men? Women and girls are trafficked.”

American columnist Ross Douthat in 2011 wrote in the New York Times: “From the 1950s onward, Asian countries that legalized and then promoted abortion did so with vocal, deep-pocketed American support. Digging into the archives of groups like the Rockefeller Foundation and the International Planned Parenthood Federation… depicts an unlikely alliance between Republican cold warriors worried that population growth would fuel the spread of Communism and left-wing scientists and activists who believed that abortion was necessary for both ‘the needs of women’ and ‘the future prosperity — or maybe survival — of mankind,’ as the Planned Parenthood federation’s medical director put it in 1976.”

As these major US foundations supported the one-child policy, one woman has made a difference in beginning to end that policy.