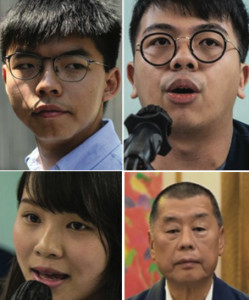 “God is always my center”

The pro-democracy movement in Hong Kong has become increasingly more vocal in the last decade as the Communist government of mainland China has sought to impose ever-more repressive measures on the island.

In 2020, the confrontations between Beijing-controlled government officers and pro-democracy activists escalated; leaders were arrested and charged with crimes carrying prison time. Most of the pro-democracy leaders are young; most are Christian; two of them are Roman Catholics.

Four who were arrested in August for “taking part in and inciting” protests outside a Hong Kong police station in June have been tried and sentenced to prison for their roles. They are Agnes Chow, 24, Ivan Lam, 24, and Joshua Wong, 26; the fourth, Jimmy Lai, is not young — he is 71, and a Hong Kong business tycoon – but he has been a pro-democracy critic of the Chinese Communist Party for years. He is also a Roman Catholic.

Lai, who stowed away alone on a fishing junk from mainland China to Hong Kong at the age of 12, went on to found the Giordano clothing brand and later, after the Chinese government forced him to sell his clothing company, the popular newspaper Apple Daily, which has been critical of the CCP and its aggressive inroads into Hong Kong government and society.

At a 2020 awards ceremony sponsored by the Catholic free-market Acton Institute, Lai, who knew he was facing a possible jail term at the time, said, “It is always in my mind as a Catholic that God is always my center. And I am always a sinner and I know my life is not about myself,” Lai said. “If I can accomplish this I know that I’m leaving in the grace of God. I know that I will be a better person for whatever suffering I have to take up.” 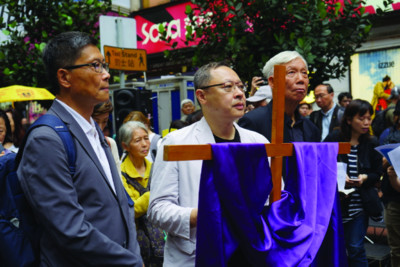 A Way of the Cross march by pro-democracy activists in Hong Kong. (Ucanews.com Photo)

The young female democracy activist who was arrested on the same day as Jimmy Lai, Agnes Chow, is also a Catholic Christian. Hailing from a “non-political” family, she says that in 2012, she saw a notice on social media about students protesting the “Moral and National Educational Scheme” Beijing sought to impose on Hong Kong schools, and joined in — meeting there Ivan Lam and Joshua Wong, all teenagers at the time. She never looked back.

“I’m a Catholic, and I do think that my participation in social movements is affected by my religion,” she said in a 2019 interview. “Religious belief and what we learn from our religion and the Bible gives us our belief and courage to fight for freedom and rights for Hong Kong people.”

Chow was sentenced in December 2020 to 10 months in jail for organizing an unlawful assembly; on the last day of the year, she was transferred to a maximum-security prison.

Joshua Wong was also sentenced to a slightly longer 13.5 months on similar charges. Wong had been a student activist as far back as 2011, when he organized the protests against the CCP’s educational plan. In 2014, the group he co-founded, Scholarism, drafted a plan for universal suffrage under a one-country-two-systems arrangement.

Raised in a Lutheran home, his father was an anti-gay-marriage activist and, said Wong, used to take the young Joshua out to help the needy.

“He told me that I should care for the abandoned in the city. They had not heard of the Gospel, and were living solitary and hard lives,” he wrote in a blog, according to the South China Morning Post.

Ivan Lam has attracted less of the spotlight than Lai, Chow and Wong, but he was a collaborator of Wong’s since their school days together at the United Christian College in Kowloon. In a speech, Wong called him “hands-down, the most trusted member of our team.” It was Ivan Lam whom Wong first followed to planning meetings before Scholarism was formed. Lam, who has also been jailed before, received a sentence of 7 months in December.

“Freedom has a price,” said Jimmy Lai at the Acton Institute ceremony, and it is one which these four courageous people are willing to pay.