Pope at Mass: life has value only when given

Pope at Mass: life has value only when given 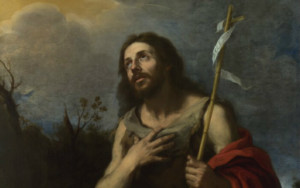 In his homily at Mass, Friday morning, Pope Francis drew lesson from the martyrdom of John the Baptist and the other characters involved in it.

According to Jesus, the martyrdom of John, the greatest man born of a woman, is a great witness to the fact that life has value only in giving it to others “in love, in truth, in daily life, in the family”. Pope Francis made the point in his homily at Mass, Feb. 8, at the Casa Santa Marta.

The Pope reflected on the Gospel episode of John’s martyrdom analyzing the characters of King Herod who is “corrupt and undecided”, Herodias, his brother’s wife, who “only knew how to hate”, Salome, “the vain dancer”, and the beheaded prophet.

The Pope said that John knew he had to diminish and annihilate himself to the point of death because Jesus must grow. The forerunner of Christ denied he was the Messiah but showed Jesus to His disciples and gradually faded away until he was extinguished and beheaded in the dark and lonely cell of the prison.

The Pope described martyrdom as a service and mystery which entails the very great gift of life. He met a violent end because of “human attitudes that lead to taking away the life of a Christian, of an honest person and make him a martyr,” the Pope said.

The Pope said that, at first, Herod “believed John was a prophet”, listened to him willingly and protected him to a certain extent but held him in prison. He was undecided because John reproached him for the sin of adultery.

The king heard God’s voice asking him to change his life but he could not because he was corrupt, and it is very difficult to get out of corruption. Herod could not come out of the tangle as he tried to make “diplomatic balances” between his adulterous life and many injustices and the awareness of the holiness of the prophet whom he decapitated.

The Gospel says that Herodias “hated” John because he spoke clearly. Pope Francis described hatred as “Satan’s breath”, saying it is very powerful, capable of doing everything excepting loving. The devil’s ‘love’ is hatred and Herodias had the satanic spirit of hatred that destroys.

Vain Salome
The daughter of Herodias was a good dancer and a delight to the diners and Herod who promised the girl everything she asked, just like Satan tempted Jesus in the desert.

Pope Francis explained that behind these characters there was Satan, who sowed hatred in the woman, vanity in the girl and corruption in the king.

The precursor of Christ, the “greatest man born of a woman”, as Jesus described him, ended up alone, in a dark prison cell, the victim of the whim of a vain dancer, the hatred of a diabolical woman and the corruption of a vacillating king. John, the Pope said, is a martyr, who allowed himself to diminish in order to give way to the Messiah.

John died in the cell, in anonymity, “like so many of our martyrs,” the Holy Father noted, adding this “is a great witness, of a great man, of a great saint”.

If someone preserves life for himself, guards it like the king in his corruption or the woman with her hatred, or the daughter with her vanity, a little like an adolescent, unknowingly, life dies and withers, becoming useless.

The Pope concluded urging all to think about the 4 characters in the Gospel and to open our hearts so that the Lord may speak to us about this.