Pope at Angelus: Working together to protect minors

Pope at Angelus: Working together to protect minors 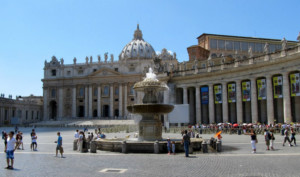 Pope Francis tells the faithful in St Peter’s Square during the Angelus, “we want all possible measures to be taken so that such crimes are not repeated”.
Speaking following the recitation of the Marian Prayer, Pope Francis reflected on the “Protection of Minors in the Church” meeting which concluded on Sunday with Holy Mass.

The Pope told those present in St Peter’s Square that, “the problem of sexual abuse of children by members of the clergy has long been a serious scandal in the Church and in public opinion, both because of the dramatic suffering of the victims and because of the unjustifiable lack of attention to them and the covering up of the perpetrators by people in authority within the Church.”

The Pontiff said, that he himself and those who had participated at the meeting had “listened to the voices of the victims, we have prayed and asked forgiveness from God and from the victims, we have become aware of our responsibilities, of our duty to do justice in truth, to radically reject any form of abuse of power, conscience and sexuality.”

A Credible and Reliable Church

The Pope underlined that activities and places in the Church had to be fully safe for minors. “We want all possible measures to be taken so that such crimes are not repeated”, he said, “and we want the Church to once again be absolutely credible and reliable in her mission of service and education for children according to the teaching of Jesus”.

Pope Francis went on to say that it is by working together, “with all people of good will and all the elements and positive forces of society, in all countries and at an international level, that the very serious scourge of violence against hundreds of millions of children, girls and boys, all over the world, can be combated to the very end, in all its forms.”