Pope: ‘Church of Acts a paradigm for every Christian community’

Pope: ‘Church of Acts a paradigm for every Christian community’

Pope Francis reflects on the life of the early Christian community during his ongoing catechesis on the Acts of the Apostles. 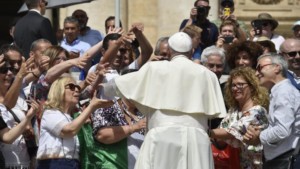 Dear brothers and sisters: In our catechesis on the Acts of the Apostles, we now consider the way of life of the first Christian community. Saint Luke presents the Church of Jerusalem, gathered in response to the Apostles’ preaching, as the paradigm of all Christian communities. As brothers and sisters in Christ, the first believers “devoted themselves to the apostles’ teaching and fellowship, to the breaking of bread and the prayers” (Acts 2:42). Luke portrays a community united in prayer, fraternity, charity and concern for those in need.  In every age, the Church is called to be the leaven of a reconciled humanity and the foreshadowing of a world of authentic justice and peace. In this way, she is enabled to live an authentic liturgical life, experiencing the Risen Lord’s presence in prayer and in the Eucharist, in order then to bring that saving love to the world. Like the early Church gathered around the Apostles, may our communities increasingly become places of deep prayer, encounter with the Lord and fellowship with our brothers and sisters, doors that open to the communion of the saints and the heavenly Jerusalem.

I welcome all the English-speaking pilgrims and visitors taking part in today’s Audience, especially those from England, Scotland, Wales, Australia, Japan, Guam and the United States of America. I greet in particular those taking part in the course on translating Latin liturgical texts sponsored by the Pontifical Atheneum of Sant’Anselmo. Upon all of you I invoke the joy and peace of our Lord Jesus Christ. God bless you!

In his catechesis at the General Audience on Wednesday, Pope Francis said that St Luke shows us the Church in Jerusalem “as the paradigm of every Christian community”. His reflection was based on a passage from the book of Acts: “And they devoted themselves to the apostles’ teaching and fellowship, to the breaking of bread and the prayers” (2:42).

In the Acts of the Apostles, we see the early Christians listening to the apostolic preaching, practicing “a high quality of interpersonal relationships through communion of spiritual and material goods”, remembering the Lord in the celebration of the Eucharist, and dialoguing with God in prayer.

The communitarian dimension of the Christian community stands in marked contrast to the individualism of the world, the Pope said. Through the grace of Baptism, Christians were able to share what they had – not only the word of God, but also material goods – with their brothers and sisters in need. It is precisely because of “the way of communion” and concern for the needy that the Christian community “can live an authentic liturgical life,” the Pope explained.

Finally, the Pope said, the story of the early Church reminds us “that the Lord guarantees the growth of the community.” Remaining united to God and to one another is an “attractive force that fascinates and conquers many”.

Pope Francis concluded his catechesis with the prayer that the Holy Spirit might “make our communities places in which to welcome and practice new life, the works of solidarity and communion, places in which the liturgies might be encounters with God, that become communion with our brothers and sisters, places that are always gates open to the heavenly Jerusalem.”