Pope at Mass: God’s Word a love letter from the One who knows us best

Pope at Mass: God’s Word a love letter from the One who knows us best 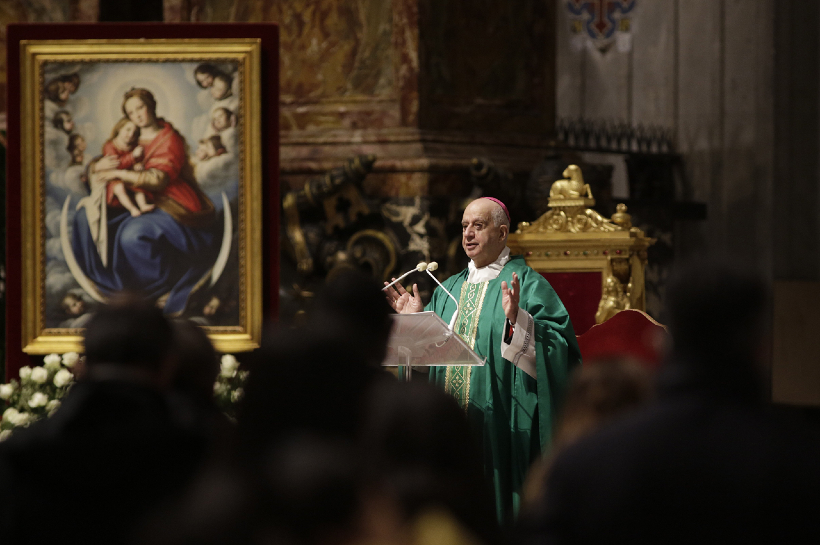 In his homily at Mass for the Sunday of the Word of God, read by Archbishop Rino Fisichella, Pope Francis invites Christians to make time for Sacred Scripture, and emphasizes that God’s Word is one of consolation but also a call to conversion.

Holy Mass for the 2nd Sunday of the Word of God was celebrated by Archbishop Rino Fisichella, President of the Pontifical Council for the Promotion of the New Evangelisation, standing in for Pope Francis who is suffering from a painful attack of sciatica.

In his homily, which was read by Archbishop Fisichella, Pope Francis focused his attention on what Jesus says and to whom He says it, as He proclaims the Kingdom of God.

The Pope noted how Jesus begins his preaching with the words: “This is the time of fulfillment. The kingdom of God is at hand.”

He went on to say that the first message to be taken from this is that “God is near and His kingdom has come down to earth.”

“The time of His distance ended when, in Jesus, He became man,” said the Pope.

He stressed that, “Before all else, we must believe and proclaim that God has drawn near to us, that we have been forgiven and shown mercy.”

God’s word, said Pope Francis, continues to tell us “Do not be afraid, I am with you.  I am at your side and I will always be there.”

“In speaking to us,” the Pope said, the Lord “reminds us that he has taken us to heart, that we are precious in His eyes, and that He holds us in the palm of His hand.”

“God’s word is one of consolation but also a call to conversion,” said Pope Francis. “‘Repent’, says Jesus, immediately after proclaiming God’s closeness.”

Those who hear God’s word, Pope Francis highlighted, “are constantly reminded that life is not about shielding ourselves from others, but about encountering them in the name of God who is near.”

No one is far from God’s heart

Turning his attention to whom Jesus speaks, the Pope noted that His first words are to Galilean fishermen, who he described as “simple folk.”

Pope Francis pointed out that Jesus began with people “not from the centre but from the periphery, and He did so in order to tell us too that no one is far from God’s heart.”

Noting the “particular power” the word of God has, the Pope emphasized how it can “touch each person directly.”

“The disciples would never forget the words they heard that day on the shore of the lake, by their boats, in the company of their family members and fellow workers: words that marked their lives forever.”  Jesus said to them: ‘Follow me, I will make you become fishers of men.’”

“He did not appeal to them using lofty words and ideas,” said Pope Francis, but spoke to their lives and told them they were to be “fishers of men.”

The Pope explained that Jesus spoke to them “in terms of their own livelihood.”

And he went on to say that Jesus does the same with us; looking for us where we are and walking by our side.

In conclusion, Pope Francis urged everyone “not ignore God’s word. It is a love letter, written to us by the One who knows us best.”

He also urged the faithful to carry it with them always and give it “a worthy place in our homes.”

To be able to focus on God’s word, the Pope prayed that we would also be given the strength “to turn off the television and open the Bible, to turn off our cell phone and open the Gospel.”