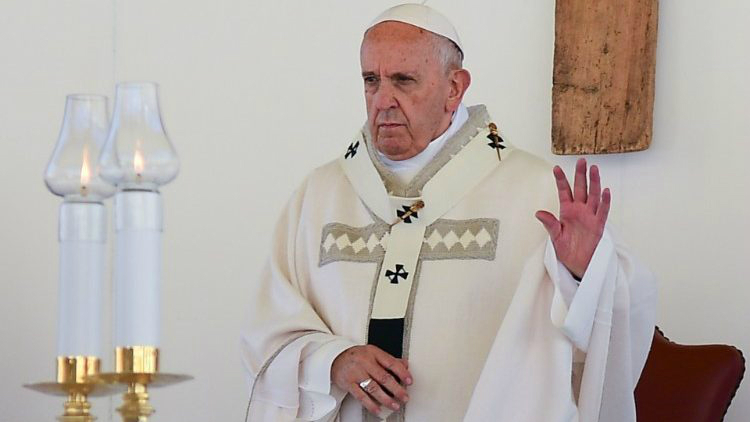 Pope Francis celebrates Holy Mass in Camerino in the Italian Marches Region, reflecting on Psalm Number 8, and on the words “remembering”, “hope”, and “closeness”.

The earthquakes that struck Camerino and nearby Italian hill-towns, on August 24th and again on October 30th three years ago, left nearly 300 people dead and buildings in ruins. At a magnitude of 6.6 on the Richter Scale, they were the most destructive earthquakes to hit Italy in over 30 years, after those that devastated L’Aquila in 2009. The towns and the people have been struggling to recover ever since.

Pope Francis began his homily by repeating the words of Psalm 8: “What is man that you are mindful of him?” The Pope said these words came to mind when he thought of the people of this area: “Faced with what you have seen and suffered”, he said, “with houses collapsed and buildings reduced to rubble, the question arises: what is man ever? What is he, if his hopes can end up in dust?”

In quoting from the Psalm, Pope Francis used the Italian verb “ricordare” – which literally means “to remember”, or to “return with the heart”.  Answering his own question, he said, “God remembers us as we are, in our frailty…He returns to us with the heart, because we are in His heart”. We may be “small under heaven and powerless when the earth trembles”, the Pope continued, “but for God we are more precious than anything”.

“Remembering is a key word for life”, said Pope Francis. “Remembering gives us the strength not to surrender”. The Pope admitted that bad memories return, even when we don’t want them to. To free ourselves “from the negative memories that keep us prisoner, from the regrets that paralyze us, we need someone to help us carry the burdens we have inside”, he said. Jesus does not offer us the “quick and easy solution” of taking away our burdens, explained the Pope. Instead, He sends us the Holy Spirit, the Comforter, who transforms “the wounds of the past into memories of salvation…because the Holy Spirit is the rebuilder of hope”.

Pope Francis then proceeded to speak about the nature of Hope. “Earthly hopes are fleeting”, he said, “they always have an expiry date”. “The hope of the Spirit”, on the other hand, “is a long-lasting one because it is based on God’s fidelity”. This is the hope that confirms we are not alone, added Pope Francis. “It is a hope with strong roots, which no storm of life can eradicate”. This is the hope that, according to St Paul, “does not disappoint”.

Pope Francis continued his homily referring to this Sunday’s Feast of the Most Holy Trinity. “The Trinity is not a theological puzzle”, he said, “but the splendid mystery of God’s closeness”. God is not “up there, distant and indifferent”. God sends us the Spirit, knowing that “it takes more strength to repair than to build”. The Pope recalled how “almost three years have passed” since the earthquake struck in 2016. “The risk is that, after the first emotional and media involvement, attention falls and promises are forgotten”, he said. “The Lord instead pushes us to remember, repair, rebuild, and to do so together”, he said, “without ever forgetting those who suffer”.

“I came here today to be close to you”, concluded Pope Francis, “to pray with you to the God who remembers…the God of hope…the God who is close to us…so that what is unstable on earth will not shake the certainty that we hold within us”.