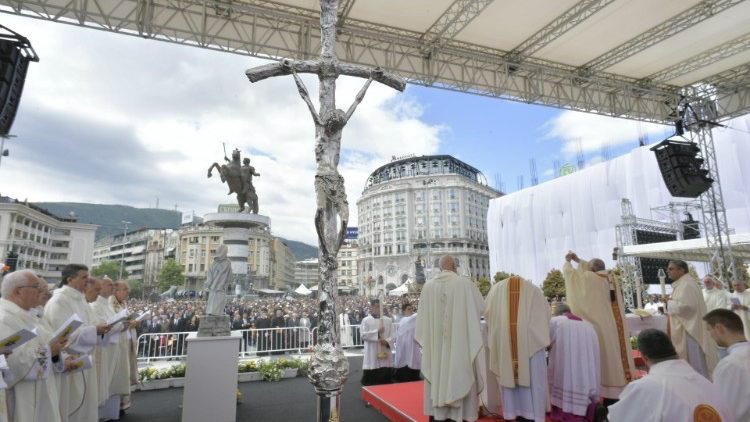 In a homily during Mass in Macedonia Square in the capital, Skopje, on May 7, Pope Francis reflected on Jesus the “bread of life” who satisfies the true hunger of man’s heart and how the followers of Jesus can satisfy this hunger in their brothers and sisters.

Pope Francis on Tuesday urged the Catholics of North Macedonia to break and share themselves with others as Jesus did in the Eucharist.  Jesus “invites us to break and share ourselves together with Him, and to be part of that miraculous multiplication that desires to reach out and touch, with tenderness and compassion, every corner of this city, this country, and this land,” the Pope urged in his homily in Macedonia Square, in the North Macedonian capital, Skopje.

He took his cue from the day’s Gospel where Jesus says, “I am the bread of life; whoever comes to me shall not hunger, and whoever believes in me shall never thirst” (Jn 6:35).

The Pope explained that the Lord gives life to the world by satisfying its hunger and thirst in a manner that “defies the narrowness of our calculations, the mediocrity of our expectations and the superficiality of our rationalizations”.

Those following Jesus, the Pope said, discovered that hunger for bread has other names too: hunger for God, hunger for fraternity, hunger for encounter and a shared feast.

“We have become accustomed to eating the stale bread of disinformation and ending up as prisoners of dishonour, labels and ignominy.  We thought that conformism would satisfy our thirst, yet we ended up drinking only indifference and insensitivity.  We fed ourselves on dreams of splendour and grandeur, and ended up consuming distraction, insularity and solitude.  We gorged ourselves on networking, and lost the taste of fraternity.  We looked for quick and safe results, only to find ourselves overwhelmed by impatience and anxiety.  Prisoners of a virtual reality, we lost the taste and flavour of the truly real.”

Breaking oneself for others

In the face of this, Pope urged Christians to implore God that they be able to hunger for His word, which breaks our insularity, solitude, indifference, dishonour and ignominy, and raises hope that awakens tenderness and sensitizes the heart by opening paths of transformation and conversion.

Like the crowd, the Pope said, we should hunger to experience the multiplication of the Father’s mercy and compassion for each person, especially those for whom no one cares: the forgotten or despised.

The Pope said that at the Eucharistic celebration invites us to go forth and become sharers in His life and mission by adopting His own way of acting and speaking, for His is “the language of bread that speaks of tenderness, companionship, generous dedication to others”.

She quenched her own hunger and thirst by going to the despised, the unloved, the lonely and the forgotten.  For Mother Teresa, “love of God and love of neighbour become one: in the least of the brethren we find Jesus Himself, and in Jesus we find God”, the Pope added.