Pope at Mass: Let us be challenged by Jesus, like Peter and Paul

Pope at Mass: Let us be challenged by Jesus, like Peter and Paul 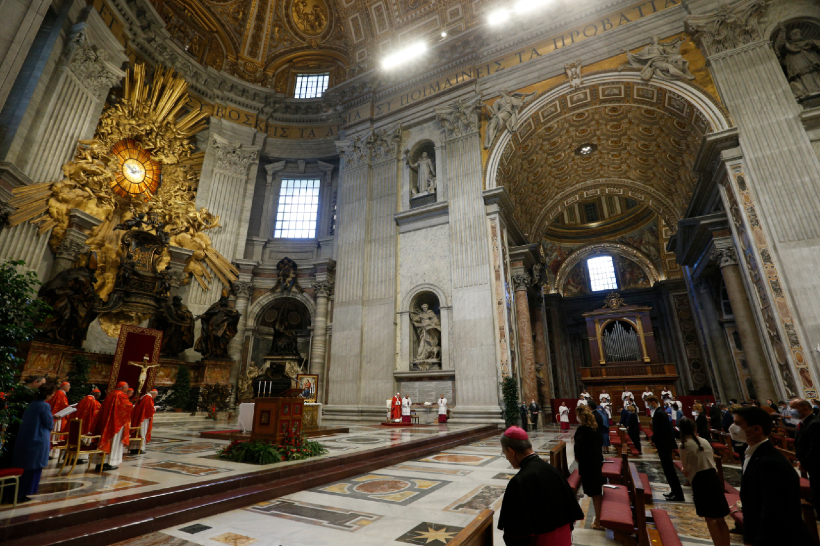 On the Solemnity of Sts Peter and Paul, Pope Francis invites us to be builders of unity and prophets of God’s heaven on earth. In keeping with health precautions, the Holy Father celebrated Mass at the “Altar of the Chair” in St Peter’s Basilica, with the participation of a limited number of the faithful.

Pope Francis offered Mass for the Solemnity of Sts Peter and Paul in the Vatican Basilica, built over the tomb of St Peter. In accordance with a long-standing tradition, the Holy Father also blessed the pallia, an ecclesiastical garment presented to metropolitan archbishops as a symbol of unity with the Holy See.

In his homily, the Pope reflected on the themes of “unity” and “prophecy.”

Unity the fruit of prayer

Although very different in experience and personality, Peter and Paul were united as brothers, the Holy Father said. Their closeness to one another was not a result of natural inclination, he explained, but came from the Lord, who commands us to love one another. “He is the one who unites us,” the Pope said, “without making us all alike.”

Pope Francis explained that the source of unity is prayer, and pointed to the example of the Church praying together for St Peter when he was in prison. The faithful of the time did not complain about persecution but gathered together in prayer.

If we spent more time in prayer and less time complaining, the Pope said, “so many doors would be opened, so many chains that bind would be broken.”

The challenges faced by Peter and Paul led to “prophecy,” the second theme of the Pope’s homily. “The Apostles were challenged by Jesus,” the Pope said: Peter, when Jesus asked the Apostles, “Who do you say that I am?”; and Paul, when Jesus asked him, “Saul, Saul, why do you persecute me?”

“These challenges and reversals,” the Pope said, “are followed by prophecies.” At Caesarea Philippi, Jesus tells Peter he will be the rock on which He will found His Church. Paul, after his conversion, became the Lord’s “chosen instrument” to bring the Gospel to the Gentiles.

“Prophecy is born whenever we allow ourselves to be challenged by God,” said Pope Francis.

“Today we need prophecy, real prophecy,” he continued. Real prophecy does not consist in spectacular displays, but in bearing witness in one’s life to the love of God: “This is how Peter and Paul preached Jesus, as men in love with God.”

Their love led them to offer their lives as martyrs: “That was prophecy,” the Pope said, “and it changed history.”

Recalling once again the Lord’s prophecy to Peter, the rock, Pope Francis said there is a similar promise for us.

“Just as the Lord turned Simon into Peter,” the Pope explained, “so He is calling each one of us, in order to make us living stones with which to build a renewed Church and a renewed unity.”

Pope Francis concluded inviting everyone to allow ourselves to “be challenged by Jesus” and to respond to His call to be “builders of unity” and “prophets of God’s heaven on earth.”