Pope at Mass on World Day of Poor: ‘The poor guarantee us eternal income’

Pope at Mass on World Day of Poor: ‘The poor guarantee us eternal income’ 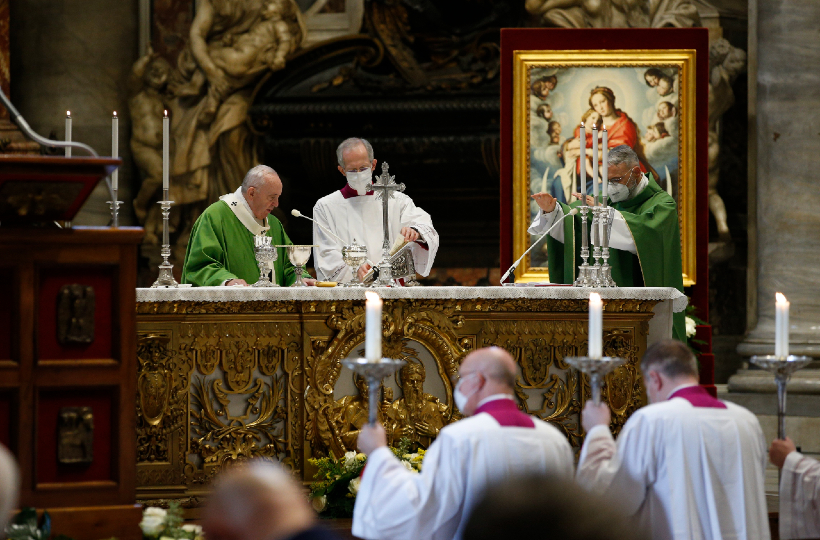 Pope Francis celebrates Mass to mark the World Day of the Poor, and urges Christians to spend our lives in prayer, charity, and witness to the Gospel on behalf of those in need.

The World Day of the Poor was instituted in 2016 by Pope Francis, and is celebrated annually on the 33rd Sunday in Ordinary Time.

This year’s occurrence marks its 4th iteration, and is being observed under the theme: “Stretch forth your hand to the poor.”

Celebrating Mass in St. Peter’s Basilica on Sunday to mark the occasion, Pope Francis reflected on the day’s Gospel (Mt 25:14-30), in which Jesus recounts a parable about a master who entrusts his servants with talents distributed according to their ability.

The Pope said the parable sheds light on the beginning, center, and end of our own lives.

“Everything begins with a great good.”

Our lives, said the Pope, began with the grace of God, at which moment we were each entrusted with different talents.

“We possess a great wealth that depends not on what we possess but on what we are: the life we have received, the good within us, the indelible beauty God has given us by making us in His image.”

Pope Francis also warned against the temptation of only seeing what we lack in life, like a better job or more money.

“If only” are illusory words, he said, which keep us from appreciating our talents and putting them to good use.

“The Lord,” he said, “asks us to make the most of the present moment, not yearning for the past, but waiting industriously for His return.”

Pope Francis went on to reflect on the center of the parable, and our lives: “The work of servants, which is service.”

He said service is what makes our talents bear fruit and gives meaning to our lives. “Those who do not live to serve, serve for little in this life.”

The Pope said the Gospel makes clear that faithful servants should take risks.

By not clinging to what they possess, good servants put their talents to good use and are not fearful or overcautious.

“For if goodness is not invested, it is lost, and the grandeur of our lives is not measured by how much we save but by the fruit we bear.”

He said a life centered on accumulating possessions rather than doing good is empty. “The reason we have gifts is so that we can be gifts.”

“How then do we serve, as God would have us serve?” asked Pope Francis.

According to Jesus’ parable, the master tells the faithless servant who buried his talent that he should have invested his money with the “bankers” in order to earn interest.

Those bankers, said the Pope, are the poor.

“The poor guarantee us an eternal income,” he said. “Even now they help us become rich in love. For the worst kind of poverty needing to be combatted is our poverty of love.”

The Holy Father added that Christians can multiply our talents by simply holding out our hand to the poor, rather than demanding what we lack.

Pope Francis then reflected on what Jesus’ parable tells us about the end of our own lives.

When our lives are over and the truth is revealed, he said, “the pretense of this world will fade, with its notion that success, power and money give life meaning, whereas love – the love we have given – will be revealed as true riches.”

A recent example of selfless service

Finally, Pope Francis recalled an Italian priest who was killed two months ago while serving the poor.

Fr. Roberto Malgesini was murdered at his parish of Saint Roch (Rocco) in the Italian city of Como. The man who killed him was allegedly a Tunisian migrant with mental problems, whom Fr. Roberto had been assisting.

“This priest was not interested in theories,” said Pope Francis. “He simply saw Jesus in the poor and found meaning in life in serving them. He dried their tears with his gentleness, in the name of God who consoles.”

The Pope concluded his homily holding up Fr. Roberto as an example of a faithful servant whose life was centered on the poor.

“The beginning of his day was prayer, to receive God’s gifts. The centre of his day was charity, to make the love he had received bear fruit. The end was his clear witness to the Gospel.”