Pope at Mass prays for funeral service workers during pandemic

Pope at Mass prays for funeral service workers during pandemic 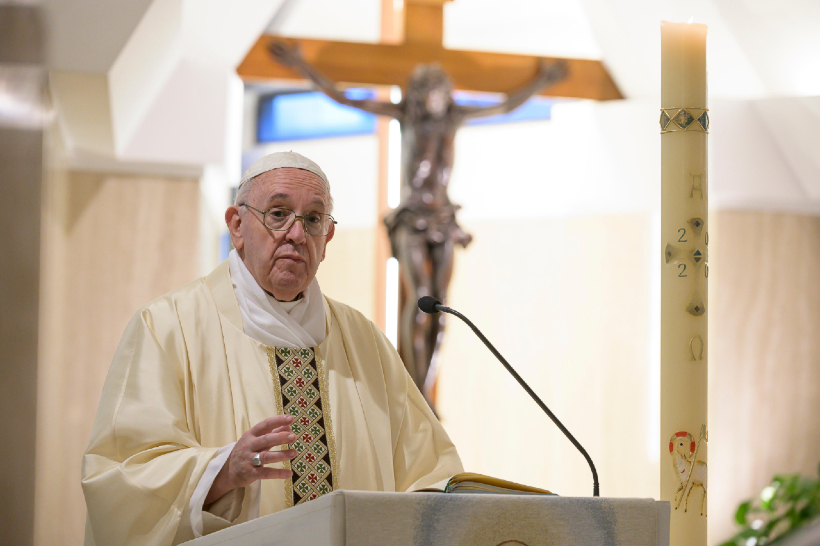 At the start of the Mass, Saturday morning, Pope Francis urges for prayers for those who work in funeral services. In his homily, he explains that the preaching of the faith is essentially witnessing to the Gospel.

At the start of the Mass at Casa Santa Marta, Saturday morning, Pope Francis urged for prayers for those working in funeral services.

“What they do is something very painful and sad.  They are touched closely by the pain of this pandemic,” he said.

Celebrating the liturgical feast of St. Mark, the Pope in his homily reflected on the Saint’s Gospel, where Jesus, before going away to the Father, sends forth His disciples saying, “Go into the whole world and proclaim the Gospel to every creature.”

Going out of self

Stressing the missionary nature of faith, he said, “Faith is either missionary or it is no faith at all.”   It is not something only for oneself.  One grows with faith which leads one to go out of oneself to others, which is what “sending forth” means, the Pope said.  “Faith must be transmitted, it must be offered, above all through witness,” he stressed.

The Holy Father recalled a priest working in a European city complaining of much agnosticism and lack of faith among Christians. The Pope said this is because of the lack of the missionary spirit.  Faith is something that we offer, above all, through witness.

The designation of a Christian or a Catholic on the identity card is a mere data, something cultural.  “This is not faith,” the Pope said. “Faith necessarily takes you out, it leads you to give it to others, because faith must be essentially transmitted. It does not remain quiet.”

Being a missionary does not consist in just going to distant lands.  It means that if you have faith, you necessarily have to get out of yourself and show your faith socially.  This does not mean proselytizing, as if recruiting people for a soccer team or a charity.

A university student in Poland had asked the Pope what he could do to convince many of his atheist friends. The Pope said, “The last thing you need to do is say something.”  “Start living, and, seeing your testimony, they will ask you: ‘Why do you live like this?’.”  Faith, the Holy Father explained, must be transmitted, not to convince but to offer as a treasure.

This, the Pope said, is done with humility as St. Peter urges in the first reading: “Clothe yourselves all with humility towards each other” (1 Peter 5:5).

He said there are many instances of men or women in the Church, in history, in movements and groups, who preached like proselytizers and ended up in corruption.

The Pope concluded saying that the Lord assures us that if we go out of ourselves to witness to Him, we will be fruitful and work wonders.  In the transmission of ideologies, he pointed out, there will be teachers but in the transmission of faith, the Lord will be with us and accompanies us until the end of the world.