Pope at Mass prays for teachers and students during the pandemic

Pope at Mass prays for teachers and students during the pandemic 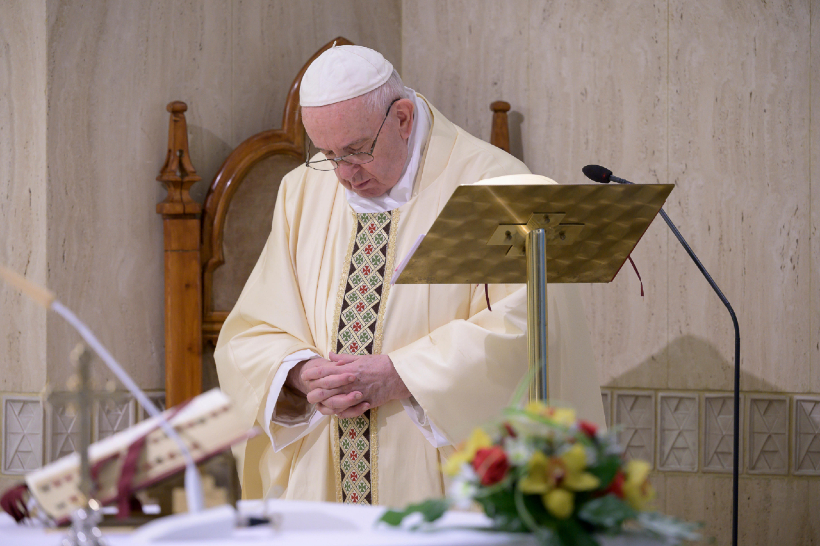 Pope Francis, during Mass at Casa Santa Marta on Friday turns his thoughts to teachers and students whose schools are closed due to the coronavirus.

At the beginning of Mass on Friday, the Pope prayed for teachers and students during the ongoing Covid-19 pandemic.

“We pray today for teachers who have to work so hard to provide lessons via the internet and other digital ways, and we also pray for students who have to take exams in a way they are not used to. Let us accompany them with prayer.”

In his homily, Pope Francis reflected on the Gospel reading about the loaves and the fishes (John 6:1-15) focusing on the sentence, “He said this only to put Philip to the test; he himself knew exactly what he was going to do.”

“The sentence of this passage makes us think”, remarked the Pope. “And that’s what Jesus had in mind when he asked Philip. ‘Where can we buy some bread for these people to eat’.”

“Jesus knew what he was about to accomplish”, explained Pope Francis, but he was testing Philip. In this scene, he continued, “you can see Jesus’s attitude with the apostles.” “He continually put them to the test in order to teach them and if they had deviated from what Jesus had asked them to do he would stop them and he would teach them.”

The Gospel, noted the Pope, “is full of these gestures of Jesus to make His disciples grow to become pastors of the people of God.”

Despite having their day of rest ruined, commented Pope Francis, the disciples listen to Jesus and talk amongst each other.

The Pope then brought up the example when Jesus was with the children. There, Jesus wanted the disciples to understand that He didn’t mind being disturbed; he wanted the little children to come to him, the Pope said.

“He teaches the apostles this pastoral behaviour, which is being near to the people of God.”

The people of God, emphasized Pope Francis make one tired “because they always ask for concrete things…” And so the pastor always needs to be ready to provide these things.”

In another version of the multiplication of the loaves, it was the disciples who wanted to send the people way just as darkness was descending, Jesus tests his disciples by telling them “Give them something to eat”.

“And this is what Jesus says today to all pastors: “You feed them”. “Are they distressed? Give them consolation. Are they lost? Show them the way out.”

Concluding his homily, the Pope highlighted that “the power of the pastor is service. He has no other power. When you begin to make mistakes taking other powers your vocation is ruined.”

Pope Francis also prayed that the Lord would speak to pastor of the Church, teaching them above all not to be afraid of God’s people, but to be close to them.