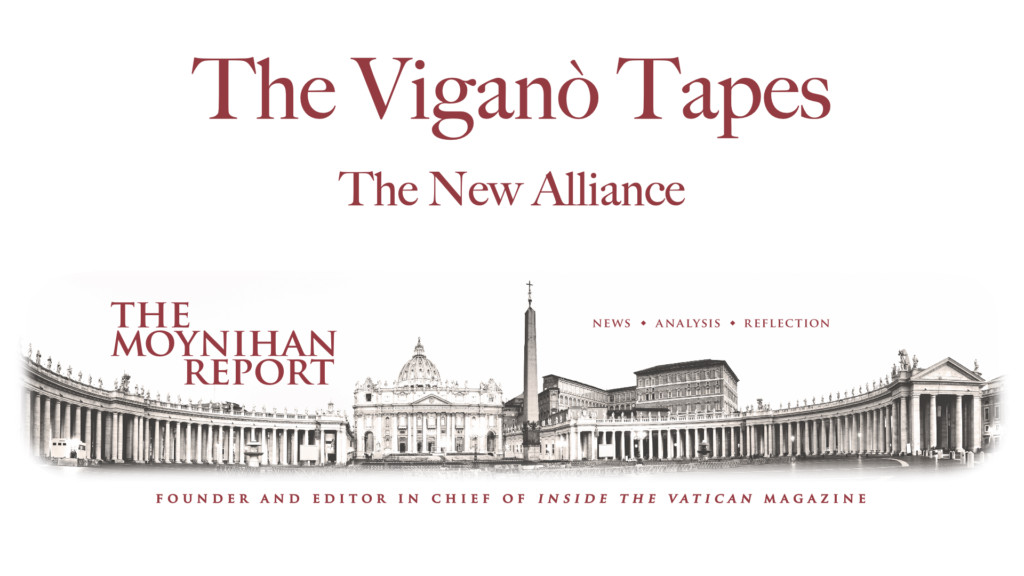 Question Number 2: Archbishop, you have spoken in very stark terms about an undeclared war, and you have spoken about grave dangers, but you’ve emphasized that you see a type of coordination between the globalists, as we may call them, the architects of this new world order and the Catholic Church with Pope Francis. How can we explain what seems to be a new alliance?

The alliance is not between State and Church but between the deep state and the deep church, that is, the degenerate components present within each.

The State has as its end the bonum commune [common good], with respect to both the natural law as well as the divine and positive law. The Church has as her end the salus animarum [The salvation of souls is the supreme law], with respect to the unchanging teaching of Christ. It is obvious that rulers are not pursuing the common good when they expose a population to experimentation without scientific basis, even in the face of evidence of the vaccine’s ineffectiveness and the damage it causes to those who have received it. And it is equally obvious that the ecclesiastical Hierarchy, insofar as it lends itself to supporting this massacre planned on a global level, is an accomplice to a crime against humanity and even more to very grave sin against God. The Bergoglian Sanhedrin is clearly integral to the plan of the Great Reset: on the one hand because it is pursuing ends that have nothing to do with the purpose of the Catholic Church, and on the other because it hopes that its complicity can bring it some sort of political and economic advantage in view of the new order.

This criminal complicity is there for all to see, and is further proven by Bergoglio’s obsessive vaccination campaign, which by mean of moral blackmail wants to impose inoculation with an experimental genetic serum on everybody. In recent days, he has gone as far as to involve Cardinals and Bishops from both North and South America in this shameful propaganda, including Archbishop Gomez of Los Angeles, the President of the United States Conference of Catholic Bishops. They too bear responsibility for a grave crime against humanity. Such a scandalous subservience of Prelates to the infernal globalist agenda has been surpassed only by the recent heretical rants of Bergoglio himself.