Analysis of a Religious Decline

Analysis of a Religious Decline

Readers who enjoy discussions of the “Which comes first, the chicken or the egg?” variety will love this book. Starting with the all-but-universal assumption that today’s lower birthrates throughout the West are a consequence of the decline in religious belief and practice, Eberstadt provides abundant evidence that this reverses the actual causality. “Smaller families mean less God,” she writes. At the very least, causality is bi-directional. Smaller families and fewer people in church go hand in hand. 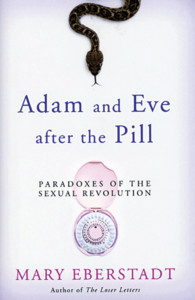 Adam and Eve After the Pill

Mary Eberstadt’s previous book, Adam and Eve After the Pill: Paradoxes of the Sexual Revolution [reviewed here in January 2013, pp. 50f], showed beyond question that this revolution, universally hailed as a breakthrough to new happiness and freedom for humanity, has in fact been a disaster for all concerned: women and children first, but for men as well. Only a “will to disbelieve” prevents people from recognizing and acknowledging this. Readers will find echoes of this argument in these pages: for instance, when Eberhardt writes that since the development of the contraceptive pill, illegitimacy and divorce rates have soared, and men have been driven away from women and families, “in part because, in a world where men no longer had to marry to assure their access to sex, many lost interest in marriage” (p. 134).

Eberstadt examines the conventional explanations of religious decline, and finds that none is consistent with the evidence discovered by social scientists. Enlightenment theory asserts that rejection of God originated with people of superior education and intelligence. Voltaire and the other fathers of the French Revolution argued that religious belief belongs to humanity’s childhood phase. People had only to throw off the shackles of faith to move into and enjoy the sunny uplands of hitherto undreamed-of freedom and independence. What actually followed, as any student of the French Revolution knows, was rivers of human blood.

Despite this inconvenient sequel, advocates of the Enlightenment theory continue to assert that, as the Enlightenment’s insights trickle down to the masses, more and more people will abandon religious faith and practice, giving us the situation we see today. Contradicting this assertion is the fact, abundantly documented by social surveys, that “Christian religiosity, in at least some significant places and times, has in fact been more concentrated in the upper classes than in the lower, and more likely among the educated that among those who are less so” (p. 71).

The American political scientist Charles Murray shows, for instance, in his disturbing book Coming Apart: The State of White America, 1960-2010, that “the upper 20 percent of the American population are considerably more likely than the lower 30 percent to believe in God and to go to church” (p. 73).

Similarly unable to explain the fact that the increasing number of Western people who reject belief in the transcendent today is “unprecedented in the history of the world” (p. 87) is the “material progress” theory. This asserts that as people got fat and happy, they realized that they did not need God anymore. How then do we account for what is called “American exceptionalism”? The level of religious faith and practice is measurably higher in the gated communities and mega-churches of prosperous America (and in other American neighborhoods as well) than in countries which are less well-off.

Missing from all attempts to explain today’s decline in religious faith and practice, Eberstadt argues, is “the family factor.” The post-World War II baby boom was accompanied by a religious boom as well. Children “drive people to church,” she writes (p. 152). This happens in various ways. The birth of a child, especially the first, fills parents with awe. Many experience it as “a transcendental fact like no other” (p. 157). I witnessed this myself in an Asian couple with high human values but devoid of religious belief. 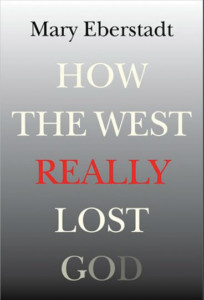 Children drive their parents to church in other ways: by needing education and involvement in a community. Churches have been satisfying those needs for centuries. Moreover, the love parents feel for their children is for many the strongest emotion they will ever experience. This can open hearts and minds to faith. “Many a mother and father staring at a newborn has had the sense that they are witnessing something that only a Creator could have made,” Eberstadt writes (p. 158). She cites the example of Whittaker Chambers, who testifies in his memoir Witness that studying his newborn daughter’s ear led him to reject atheism and believe in God.

Christian bodies which ignored the family factor by abandoning hitherto universally-accepted moral norms, starting with the acceptance of artificial contraception by the Anglican Lambeth Conference in 1930 and continuing with today’s widespread acceptance of same-sex marriage, even for ordained clergy, have participated in their own suicide. The so-called mainline Protestant bodies in the United States are in freefall, while their Evangelical and Pentecostal siblings are growing. Catholics who ignore the Church’s teaching about artificial contraception have smaller families — an important factor in the smaller number of those offering themselves today for service as religious sisters, brothers, and priests.

Are these trends unstoppable? And if so, what is the future for faith and family? Toward the close of her book Eberstadt offers two chapters outlining the cases “for pessimism” and “for optimism,” respectively. Should present trends continue, the future for both faith and family is bleak. Any student of history knows, however, that trends, however strong, never continue indefinitely. History is not linear, but cyclical. Eberstadt quotes the late Harvard sociologist Pitirim Sorokin, who wrote in 1942: “The principal steps in the progress of mankind toward a spiritual religion and a noble code of ethics have been taken primarily under the impact of great catastrophes.”

For religious believers, the future of faith and family is crucially important. Is it important for non-believers as well? Eberstadt argues that it is. 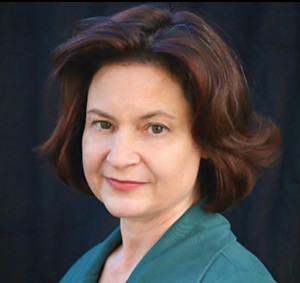 Despite all the evils inflicted on humankind by religious wars and persecutions, Christianity as a whole is a force for good in society. Surveys show that believers give more to charity. They live longer and are healthier, are more likely to be happy, and commit fewer crimes. And, as the original collective, families put first the welfare not of the individual, but of the community.

With a reminder that many of the great atheists and secularists have been childless, Eberstadt concludes eloquently: “The natural human family as a whole has been the human symphony through which God has historically been heard by many people – not the prophets, not the philosophers, … and the gradual but by now recognizable muffling of that symphony is surely an important and overlooked part of the story of how certain Western men and women came not to hear the sacred music anymore.”