The Analogy of Being According to Father José Alfonso Salazar

The Analogy of Being According to Father José Alfonso Salazar 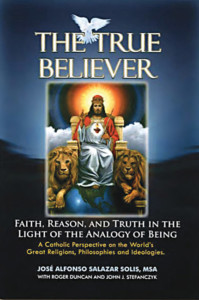 José Alfonso Salazar
The True Believer
Faith, Reason and Truth in Light of
the Analogy of Being:
A Catholic Perspective on the World’s Great Religions, Philosophies and Ideologies; An Ecumenical Apologetics Holy Apostles Press
Washington, DC
www.holyapostlespress.org 362 pages. $24.95

In his ground-breaking text The True Believer, Father José Alfonso Salazar, M.S.A. (the Society of the Missionaries of the Holy Apostles, a new congregation of the Franciscan family), argues that the analogy of being (Wisdom 13:5, Romans 1:20), is the overall transcendental concept which points unequivocally to the full truth of the Roman Catholic faith and demonstrates why the Catholic Church is “the pillar and foundation of truth” (I Timothy 3:15). For Salazar, the analogy of being is the idea best suited to prove that fullness of truth to the rest of world, and thus to bring the whole world to know, love, and worship the One Triune God. Salazar notes that this concept is ancient: it was implicitly introduced at the Fourth Lateran Council (1215 A.D.) and later expounded upon by St. Thomas Aquinas (and explicitly named by Cardinal Thomas Cajetan in the 14th century). At the same time, it has been studied and explained by many modern theologians such as Erich Pryzwara, Reginald Garrigou-Lagrange, Karl Rahner, Louis Bouyer, Hans Urs von Balthasar and Rodney Q. Howsare. For all of them, as for Salazar, the analogy of being is the master tool, or pristine root concept, of all human reality, the best-suited tool to prove that it is in the Catholic Church in whose fullness is gathered all the truth of human philosophies and creeds. So the concept of the analogy of being aids in promulgating the Church’s universal truth to the rest of the world.

“Were all the religions but human guesses at truth, we should be reduced to constructing what synthesis we could of their positive doctrine,” E. I. Watkins writes in The Catholic Centre. “The Catholic religion, however, bears out its claim to be a Divine revelation of truth by the fact that its doctrinal system brings together and reconciles in its comprehensive and balanced truth the partial truths taught by all other religions, rejecting only their denials, their exclusions, and their partialities. Moreover, it implies a philosophy correspondingly comprehensive and synthetic. All religions thus tend towards the Catholic religion as their fulfillment. Their divergent lines, when straightened and prolonged, meet in the Catholic Centre. There the exaggerations of a partial truth, the exclusions of complementary truth, are corrected and supplied in the comprehensive truth embracing all positive religious truths. And the via media is maintained between all extremes. All roads lead to Rome.”

Salazar’s book upholds Philosophical Realism and Incarnate Christian Theism as normative for the Roman Catholic faith. The Analogy of Being is used by Sal­azar to show a type of middle-ground, which he dubs Mediocentrism (in brief, that there is overlapping between the material/quantifiable and immaterial/unquantifiable real being; between the noumena and phenomena), between the extremes of Simple Monism (that the spiritual and material are ultimately one and the same) and Radical Dualism (that the spiritual and the material are radically divorced from one another and do not interact). His text consists of detailed explanations of how these two polarities, the univocal concept of being and the equivocal concept of being, fail to answer the various metaphysical and phenomenological problems in philosophy, and pose major theological errors. 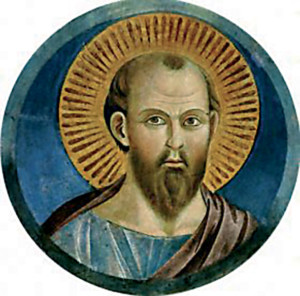 Saint Paul’s Exhortation to the Colossians: “See to it that no one captivate you with an empty, seductive philosophy according to human tradition, according to the elemental powers of the world, and not according to Christ.” (cf. Colossians 2:8)

The analogy of being, as the middle central position, is the overarching paradigm that reconciles antinomies and can adequately satisfy these difficulties. Salazar’s text thus identifies where the exaggerated univocal and equivocal lines of thought on the immanence and transcendence of God have led to error in other denominations of Christianity as well as other faith traditions.

“For Protestantism and the world’s religions, their falsehood lies not so much in clear opposing assertions, but in the lack of completeness, an emphasis on one side of a profound religious issue, a lack of affirming a deeper richness,” writes Eric J. Przywara.

Salazar wishes to demonstrate that it is only through the analogy of being that a correct paradoxical convergence of all rational truth or mediocentric view can be achieved, that this view demonstrates the limited positions of non-Catholic faith communities, and most significantly, that it is only through this mediocentric approach that all of the doctrines and practices, specifically on the Real Presence in the Holy Eucharist, of the Catholic Church can be correctly understood. This is especially true in the teaching of St. John of the Cross and St. Teresa of Avila on the Transforming Union in Christ and Total Self Forgetfulness (cf. Galatians 2:20) as the proper corollary spirituality of the analogy of being. In short, all that we as Catholic Christians believe and seek to understand can be successfully believed and understood through a proper utilization of the analogy of being.

“Christ can be called the concrete expression of the Analogy of Being, analogia entis, since He constitutes in Himself, in the unity of His divine and human natures, the proportion of every interval between God and man, and this unity in His person in both natures,” Hans Urs von Balthasar wrote in his Theology of History.

Though the philosophical implications of the Analogy of Being are the main subject of Salazar’s text, the main object of this revolutionary apologetics text is to foster religious faith and religious conversion, and the bolstering of conviction in the Roman Catholic faith throughout the world. Salazar’s mediocentrism is particularly well-suited to contest religious pluralism, syncretistic religious movements such as the New Age movement, biblical fundamentalism, and secular humanism, four of the most significant threats to the Church in the 21st century. It will undoubtedly help people to turn towards the kingdom of God (where the Father is worshipped in spirit and in truth, cf. John 4:23-24) and away from that of the devil (the father of all lies, cf. John 8:44) where all persons not in the kingdom find themselves now and in eternity. It also is an ideal rudimentary tool for use in the Ecumenical and Inter-religious Movement, and for the New Evangelization. It upholds and justifies and is a companion to many of the ideas earlier put forward by the Congregation for the Doctrine of the Faith (cf. Dominus Iesus, 2000). This dynamic text is the ideal objective means to come to a lucid, sane, and comprehensive understanding of this world’s current major political warring conflicts, which have their roots in religious and philosophical differences.

Salazar’s text is not typical of what you may find being produced by academics. Academic texts are usually quite narrow; Salazar’s is very broad, introducing readers to a huge amount of information. Salazar’s text introduces the concept of the Analogy of Being and indicates where it can be found in the world’s philosophies and religions, but does not exhaustively deal with the implications of it. That, Salazar seems to think, is work for others to build upon. I see this text being highly useful for the teaching of Catholic youth about the full philosophical validity of their faith, as well as being a seedbed for future scholars to utilize in their own thought. Though both are sorely needed in our contemporary Catholic Church, it is the former purpose for which I believe Salazar’s book to be exceptionally well-suited: to be one day widely utilized in seminaries and lay Catholic colleges and universities. Father Salazar has given in this text a solid means by which we may follow St. Paul’s exhortation to the Colossians: “See to it that no one captivate you with an empty, seductive philosophy according to human tradition, according to the elemental powers of the world, and not according to Christ” (cf. Colossians 2:8).

In The True Believer, we are able to see how the Holy Spirit favors the prepared mind, and we are able to grasp how the Catholic analogy of being represents the unity of all philosophical experience; provides a balanced survey of the central God questions — a bird’s-eye vantage point perspective grounded in philosophical realism. The True Believer serves as a propaedeutic for the gift of a living Christian faith. A must-have gift for all college students and clergy.

Sr. Helen Heramil, POSC received her MD from the University of the Philippines, School of Medicine, at Manila, in 1987, and MTS (Masters of Theological Science), from the John Paul II Institute of Bio-Ethics at Catholic University of America, Washington, DC, in 2009. She is a member of the Little Workers of the Sacred Heart and ministers at Catholic Charities of the Archdioceses of Washington, DC.