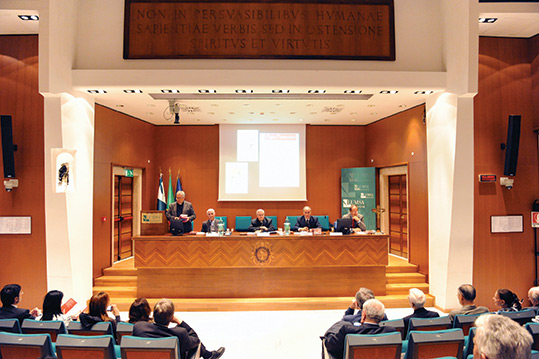 “And now we take up this journey. Bishop and People … A journey of fraternity, of love and mutual trust. Let us pray for one another. Let us pray for the whole world that there may be a great spirit of fraternity.” These words of the newly-elected Pope Francis show the essence of his teaching as archbishop of Buenos Aires. The first Latin American pontiff, Pope Francis will use his experience in the exercise of his papal ministry. In order to introduce readers to the new Pope’s thought and vision, the Vatican Publishing House has started a series of small, reasonably-priced publications featuring the speeches and homilies of former Cardinal Bergoglio, now Pope Francis. 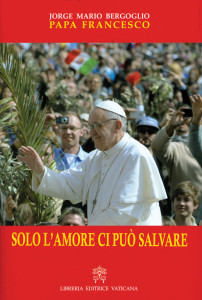 The first four volumes to be published in Italian are: “Vi chiedo di pregare per me.” Inizio del Ministero Petrino di Papa Francesco (“I ask you to pray for me”: The Beginning of Pope Francis’ Petrine Ministry) with his first papal homilies; Solo l’amore può salvarci (Only Love Can Save Us), a collection of 20 homilies and writings dating back to his Buenos Aires days, published in cooperation with Editions Parole et Silence; Varcare la soglia della fede (Crossing the Threshold of Faith), a letter of the archbishop of Buenos Aires for the Year of Faith with an introduction by Salvatore Fisichella, president of the Pontifical Council for Promoting the New Evangelization; Noi cittadini, noi come popolo. Verso un bicentenario in giustizia e solidarietà (2010-2016) (We Citizens, We as a People: Towards a Bicentennial in Justice and Solidarity), a speech delivered on October 6, 2010, the XIII Day of Social Pastoral Care for the 200th anniversary of the independence of Argentina, co-published with Jaca Books, with an introduction by Archbishop Mario Toso, secretary of the Pontifical Council for Justice and Peace. 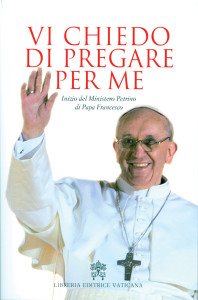 “Vi chiedo di pregare per me.” Inizio del Ministero Petrino di Papa Francesco (“I ask you to pray for me”: The Beginning of Pope Francis’ Petrine Ministry) and Solo l’amore può salvarci (Only Love Can Save Us) will be published in English by Paulist Press and Our Sunday Visitor, respectively. In addition, these two volumes will be published in German and Portuguese and Varcare la soglia della fede (Crossing the Threshold of Faith) in French. The Vatican Publishing House has also purchased the copyrights to all the homilies of Cardinal Bergoglio when he was archbishop of Buenos Aires. They will be published in several languages. Also, the summaries of the homilies delivered by the Pope during his private morning Masses at Domus Sanctae Marthae, available on Vatican Radio’s website and in L’Osservatore Romano, will be published.

The work and preaching of the new Pope “from the ends of the earth” is characterized by a simple pastoral style. The key to his thought was illustrated by Archbishop Mario Toso; Juan Pablo Cafiero, ambassador of Argentina to the Holy See; and Professor Luis Antonio Gallo, professor emeritus at the Salesian Pontifical University of Rome, at the presentation of Cardinal Bergoglio’s speech Noi cittadini, noi come popolo. Verso un bicentenario in giustizia e solidarietà (We Citizens, We as a People: Towards a Bicentennial in Justice and Solidarity) in the main hall of LUMSA University of Rome on May 10, 2013. 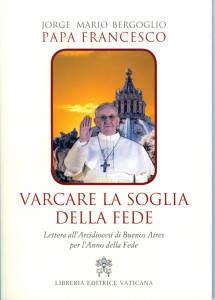 Cardinal Bergoglio’s vision of society originated from his personal experiences in Argentina. The 200th anniversary of the independence of Latin American countries, Argentina included, celebrated three years ago, gave the cardinal an opportunity to speak to politicians about their duty and mission in society. He invited them to bring about a renewal of politics through participatory democracy. According to Jorge Bergoglio, the renewal of politics should be based on the people perceived as a community and a new political supplementary project. He also proposes a culture of dialogue.

He has repeatedly emphasized the role of the people in his capacity as archbishop of Buenos Aires and as Pope. “Democracy,” he says, “must be based on the people thought of as a community in which everyone is involved in the search for truth, goodness and beauty, in which everyone struggles for their future and a decent life. Democracy must find a way out of the dichotomies kept alive by modern philosophy derived from Hobbes: the dichotomy between personal and public ethics and between ethics and social justice.” Moreover: “True democracy aims at eradicating poverty and achieving integral development for everyone,” as emphasized by Archbishop Toso in the foreword to Pope Francis’ book. Also, as José Paradiso points out in the introduction to the book: “In the vision expressed by Cardinal Bergoglio, modern man is caught up in bipolar oppositions: completeness versus incompleteness, real versus ideal, and local versus global.” 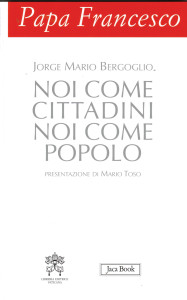 The beginnings of Cardinal Bergoglio’s teaching to the Latin American Church can be found in the documents of the Aparecida and Santo Domingo meetings of the Latin American Episcopal Conference (CELAM). The other key theme of Cardinal Bergoglio and Pope Francis is poverty. The Church he advocates, said Professor Gallo, is a Church not only paying attention to the poor, but also siding with the poor. In his comments, Jorge Bergoglio always takes reality as his starting point — not ideas, but people of flesh and blood — “with one eye on the Gospel and the other on the people.”

He speaks about the contribution of the old to society, a typical Argentine topic: “‘Please pay attention to the old,’ he often says. He is also deeply concerned about popular devotion. He reminds us that ‘God lives in the city,’” Professor Gallo noted.

In his letter Crossing the Threshold of Faith, Cardinal Bergoglio takes up the topic first dealt with by Benedict XVI in his motu proprio Porta fidei (The Door of Faith), which announced the Year of Faith. The archbishop of Buenos Aires speaks strongly about the modern world being closed to faith and God, using the image of the “closed door.” Since his election as Pope, as Archbishop Fisichella has written, the closed door has become a key point of his pastoral ministry, an issue which is not restricted to the Church of Buenos Aires.

“Increasing insecurity has gradually led us to close our doors, to install surveillance systems, security cameras, to distrust strangers knocking on our door.” The closed door is “a distinctive feature of our world, a lifestyle, a way of facing our neighbor, the elderly, even our future.” On the other hand, “the image of the open door has always stood for light, friendship, joy, freedom and trust. How desperately we need to recover all this! The closed door devastates, atrophies us, tears us apart from one another.”