A LETTER TO PUTIN

Pope Francis wrote to Vladimir Putin, Russian president, host of the G-20 summit in St. Petersburg, Russia, September 5-6. The pontiff asked leaders of the world’s 20 largest economies to “lay aside the futile pursuit of a military solution” to the Syrian civil war and promote instead a “peaceful solution through dialogue and negotiation.” In his letter to Putin, Pope Francis wrote that “from the very beginning of the conflict in Syria, one-sided interests have prevailed and, in fact, hindered the search for a solution that would have avoided the senseless massacre now unfolding.”

During the closed-door meeting in the Pope’s library, the two leaders held “cordial talks” concerning Bolivia’s “social-economic and religious situation” as well as “the promotion of peace in Syria and the Middle East,” said a written statement released by the Vatican. 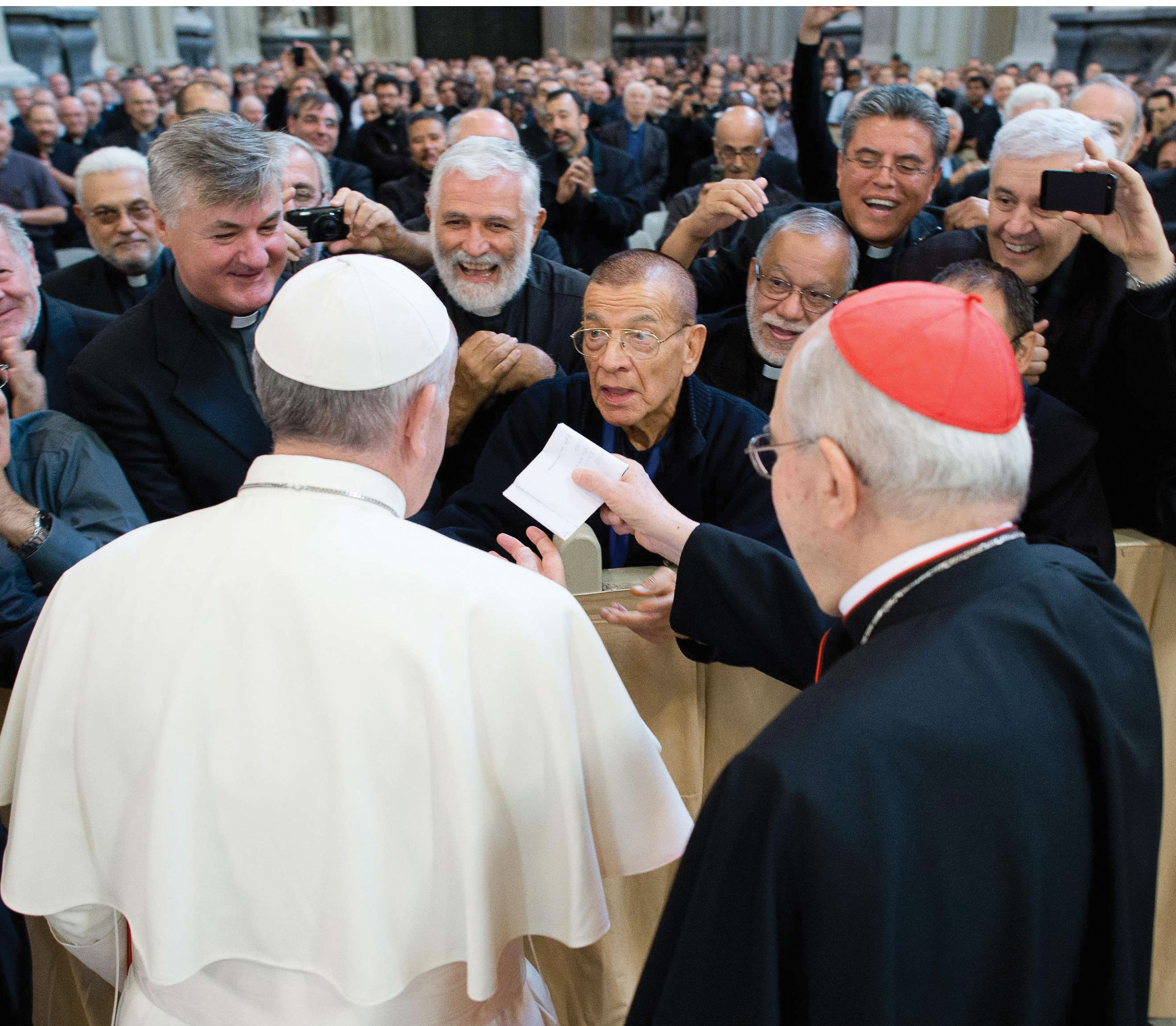 PRAYING FOR PEACE IN SYRIA

Pope Francis led a prayer in St. Pet­er’s Square for peace in Syria. His homily did not refer to contemporary events but spoke in biblical terms about the nature of war, whose origins he traced to the fall of Adam and the first murder by Cain of his brother Abel. The Pope’s homily was followed by a period of Eucharistic adoration, including several stretches when all present stood or knelt in silence. The ancient icon of Mary known as Salus Populi Romani (health of the Roman people), which had been transported for the occasion from Rome’s Basilica of St. Mary Major, stood on an easel beside the altar.

A “DEEPER WAR” AGAINST EVIL

“This war against evil means saying no to fratricidal hatred and to the lies that it uses, saying no to violence in all its forms,” the Pope said before praying the noon Angelus. The Pope asked listeners to pray for an end to Syria’s civil war and for peace in other beleaguered Middle Eastern countries.

“SOLIDARITY IS NOT A DIRTY WORD”

Speaking during a visit to the Astalli Center of the Jesuit Refugee Service in Rome, Pope Francis called on wealthy societies and the Catholic Church to do more to help and defend the rights of the needy. “Solidarity, this word that strikes fear into the more developed world,” he said. “They try not to say it. It’s almost a dirty word for them. But it is our word!”

“SANCTITY IS STRONGER THAN SCANDALS”

Acting in his capacity as bishop of Rome, Pope Francis offered words of encouragement to his diocesan priests, assuring them that recent and current scandals cannot overcome the Church’s holiness and urging them to keep their vocations alive through love of God. The Pope made his remarks at a meeting with diocesan clergy at the Basilica of St. John Lateran, the cathedral of Rome. Pope Francis devoted the first part of the meeting, which lasted more than two hours, to answering a letter he had received a few days earlier from an elderly parish priest, writing of his struggles as a pastor. Pope Francis urged priests to make their churches more welcoming, suggesting, among other ideas, that marriage courses for engaged couples be scheduled at more convenient times.

At his weekly audience, Pope Francis said the Church should approach its members with the face of a patient, merciful and understanding mother who always forgives her erring children and never ceases to pray that they resume the path of Christian living. A mother teaches her children the right way of life “with tenderness, with affection, with love,” he said, because she “didn’t learn it from books, but learned it from her own heart.” Invoking the example of St. Monica who never ceased praying for the conversion of her son, St. Augustine, the Pope said that mothers never tire of praying for their children, “especially the weakest, the neediest, those who have pursued dangerous or mistaken ways of life.”

THE ROLE OF A BISHOP

Don’t be on the road all the time, aloof or deaf to people’s needs; be simple, loving and always close by, just like a spouse would be for his wife, Pope Francis told some 120 recently-appointed bishops from around the world. The Pope based his talk on what St. Peter meant with his words: “Tend the flock of God in your midst.” Tending one’s flock, he said, is all about welcoming people with joy, and then walking and staying with them through thick and thin. A bishop needs to lead his flock in order to show people the way; he needs to be in the middle of his flock “in order to strengthen it in unity”; and he needs to bring up the rear so no one is left behind, the Pope said.

In a lengthy interview, Pope Francis spoke with frankness about the perils of overemphasizing Catholic teaching on sexual and medical ethics; the reasons for his deliberate and consultative governing style; and his highest priority for the Church today. The Pope’s remarks appeared in an interview with Jesuit Fr. Antonio Spadaro, editor of the Italian Jesuit journal La Civiltà Cattolica. The interview was published in the US magazine America and simultaneously in other Jesuit publications in other languages. The Pope reaffirmed one of his major themes: the need for mercy rather than judgment when approaching sin.

Visiting the island especially hard hit by the European economic crisis, Pope Francis blamed high unemployment on globalization driven by greed. Before speaking to a crowd of about 20,000 near the Cagliari city port, Pope Francis heard a series of speeches in greeting, including one from an unemployed father of three who spoke of how joblessness “wears you out to the depths of your soul.” The Pope celebrated Sunday Mass in a square outside the Sanctuary of Our Lady of Bonaria, the namesake of his native city of Buenos Aires (“Bonaria” is the Italian for “Buenos Aires”). Pope Francis originally announced his trip to Sardinia to venerate the statue of Mary there. He prayed to Mary to “give us your gaze; may no one hide it from us. May our childlike heart defend it from so many windbags who promise illusions, from those who avidly look for an easy life, from promises that cannot be fulfilled.”

THE UNITY OF THE CHURCH

At his weekly general audience in St. Peter’s Square, Pope Francis continued his series of audience talks about the Creed — looking at what Catholics believe about the Church — and focused on the Catholic belief in “one, holy, catholic and apostolic Church.” He asked people to have the humility to repair the divisions in their lives “with patience and sacrifice” and follow the Prayer of St. Francis to be instruments of God’s peace. The true richness of the Church “is what unites us, not what divides us,” he said. The Pope also asked people to pray for persecuted Christians in the world and to be genuinely concerned about their plight, just as one would be for a family member in distress.

Being a catechist is about teaching the faith in its entirety and putting Christ — not oneself — on center stage, Pope Francis said during a special Mass in St. Peter’s Square for hundreds of catechists who were in Rome for a three-day international congress hosted by the Pontifical Council for Promoting the New Evangelization. In an earlier audience with catechists, the Pope said the Church needs good catechists who love Christ, live out the Gospel in their lives and courageously go to the margins of society to share the gift of faith with others. 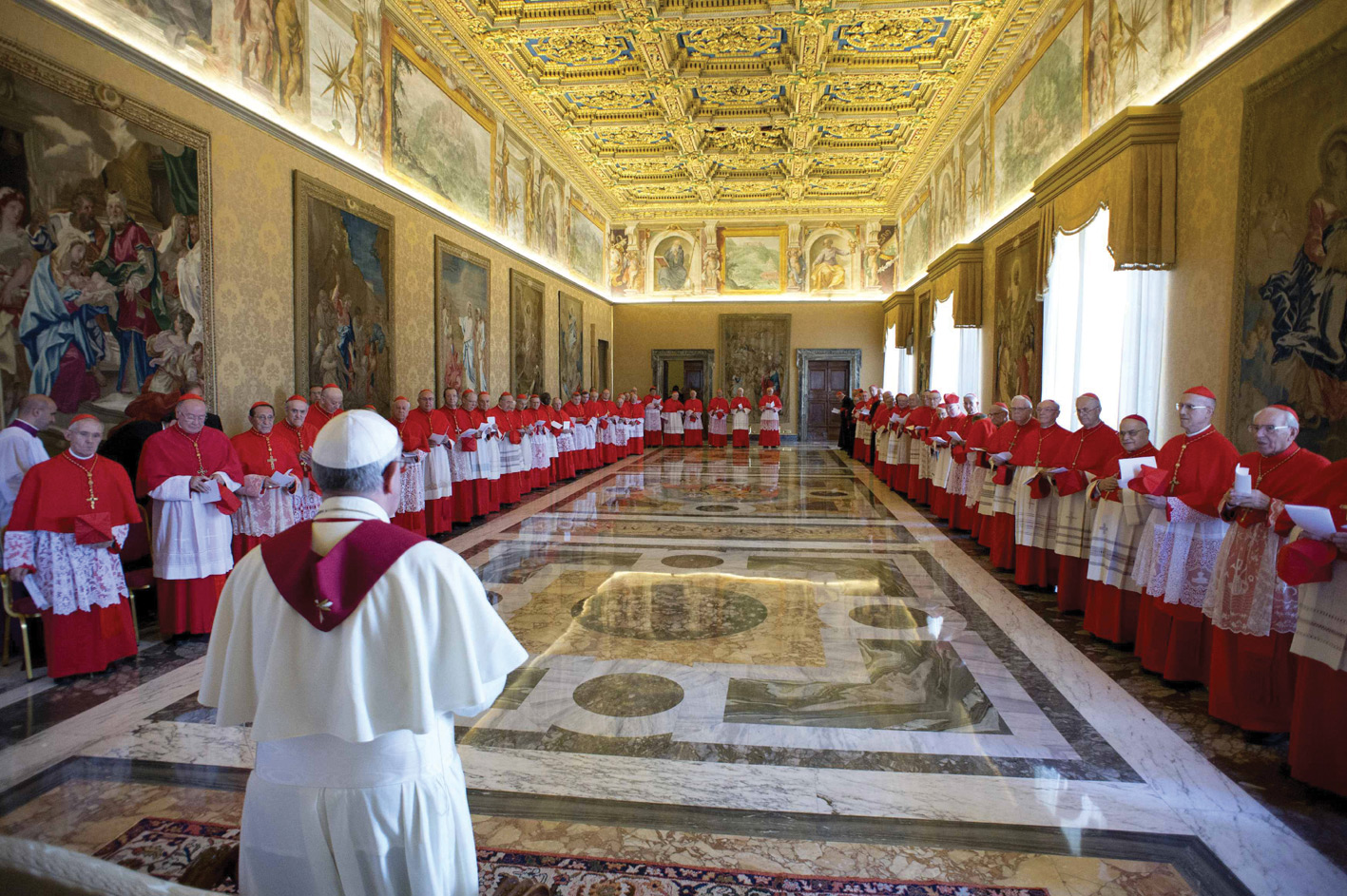 Pope Francis during the canonization of John XXIII and Blessed John Paul II.

CANONIZATION OF JOHN XXIII AND

Recognizing that Blessed John XXIII and John Paul II have widespread reputations for holiness and that years of studying their lives and actions have proven their exceptional virtue, Pope Francis announced he would declare his two predecessors saints at a single ceremony April 27. The Pope made the announcement at the end of an “ordinary public consistory,” a gathering of cardinals and promoters of the sainthood causes of the two late Popes. The choice of April 27, which will be Divine Mercy Sunday in 2014, was not a complete surprise. Divine Mercy Sunday is a celebration instituted worldwide by Pope John Paul.

As part of its continuing efforts to promote transparency and to demonstrate its stability and adherence to industry standards, the Vatican bank published its annual report for the first time in its history. The Institute for the Works of Religion, as the bank is formally known, released its independently-audited report, publishing the 100-page document on its website: www.ior.va.

If the Church excluded sinners, it would pretty much be empty, Pope Francis told thousands of people gathered for his weekly general audience. In the history of the Church, “some have been tempted to say that the Church is the Church only of the pure” and that others should be shunned, he said.

Pope Francis used his audience talk to explain what Christians mean when they profess in the Creed that the Church is holy. “The Church, which is holy, does not reject sinners, it does not reject all of us,” the Pope said. “It calls everyone to let themselves be embraced by the mercy, tenderness and forgiveness of the Father, who offers everyone the opportunity to encounter him and walk the path toward holiness.”