Pope at Santa Marta: “Conversion is a grace” 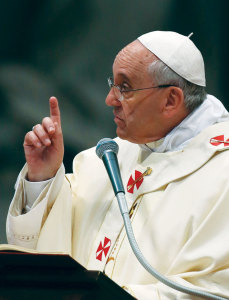 Conversion is a grace, “it is a visit from God,” said Pope Francis at his November 18 morning Mass in Domus Santa Marta.

The Pope based his reflections on the Readings of the Day taken from Revelation, Chapter 3 and the Gospel according to St. Luke on the encounter of Jesus with Zacchaeus the tax collector. He found in these passages three different calls to conversion: a call to convert from “lukewarmness” or from being “comfortable” in the faith; a call to convert from a faith of mere appearance; and a call to convert from the “corruption” of imagining one is rich, but actually being in extreme spiritual poverty, to the point of spiritual death.

In the first reading from Revelation, Francis noted, the Lord calls Christians in Lao­dicea to convert because they have become “lukewarm.” They are no longer filled with the ardor of their first conversion to faith. They live a “comfortable spirituality.” They think: “I do what I can, but I am at peace and do not want to be disturbed…”

Pope Francis noted that such people may “live well” and believe that “nothing is missing: I go to Mass on Sundays, I pray a few times, I feel good, I am in God’s grace, I’m rich” and “I do not need anything, I’m fine.”

But, he added: “The Lord has harsh words for people like this. He says: ‘Because you are lukewarm, I will spit you out of my mouth.’” Therefore, the Lord gives them some advice, the Pope continued. “He tells them to ‘dress themselves,’ because comfortable Christians are naked,” Francis said.

Then, he added, “there is a second call” to “those who live by appearances, Christians of appearances.” And the Lord “calls them to conversion.”

“Am I one of these Christians of appearances?” Francis asked. “Am I alive inside, do I have a spiritual life? Do I hear the Holy Spirit, do I listen to the Holy Spirit, do I move forward, or…? But, if everything looks good, I have nothing to reproach myself about: I have a good family, people do not gossip about me, I have everything I need, I married in church… I am ‘in the grace of God,’ I am all right. Appearances! Christians of appearance… they are dead! Instead [we must] seek something alive within ourselves, and with memory and vigilance, reinvigorate this so we can move forward. Convert: from appearances to reality….”

Then there is the case of Zacchaeus, “the chief tax collector, and rich” — the “third call.”

“He is corrupt,” the Pope said, “he was working for foreigners, for the Romans, he betrayed his homeland.”

Francis continued: “He was just like many leaders we know: corrupt. Those who, instead of serving the people, exploit the people to serve themselves. There are some like this in the world. And people did not want him. Yes, he wasn’t lukewarm; he was not dead. He was in a state of putrefaction. He was corrupt. But he felt something inside: this healer, this prophet who people say speaks so well, I would like to see him, out of curiosity. The Holy Spirit is clever, eh! He sowed the seed of curiosity, and so in order to see him this man even does something a little ‘ridiculous.’ Think of an important leader, who is also corrupt, a leader of leaders — he was the chief — climbing a tree to watch a procession: just think of it. How ridiculous!” But Zacchaeus, he said, “had no shame.” He wanted to see Jesus and “the Holy Spirit was working in him.” Then “the Word of God came into the heart and with the Word, joy.”

Francis continued: “Those of comfort and those of appearance had forgotten what joy was. This corrupt man immediately gets it… his heart changes, he converts.”

So Zacchaeus promises to give back four times what he has stolen. “When conversion touches pockets, it’s a certainty,” Francis said. “Christians in heart? Yes, everyone is. Christians by blood? All of us. However, Christians with pockets, very few. But, conversion … and here, it arrived straight away: the authentic word. He converted. But faced with this word, the words of the others, those who did not want conversion, who did not want to convert: seeing this, they grumbled: ‘He has gone to the house of a sinner!’He has dirtied himself, he has lost his purity. He must purify himself because he entered the house of a sinner.”

Pope Francis reiterated that these are “the three calls to conversion” that Jesus himself makes to “the lukewarm, the comfortable, to those of appearance, to those who think they are rich but are poor, who have nothing, who are dead.” The Word of God “is able to change everything,” but “we don’t always have the courage to believe in the Word of God, to receive that Word that heals us within.”

In the last weeks of the liturgical year, the Church wants us all to “think very, very seriously about our conversion, so that we can move forward on the path of our Christian life.” It tells us to “remember the Word of God, appeals to our memory, to guard it, to be vigilant, and also to obey the Word of God, so that we can begin a new life, converted.”