The last week of June was marked by two events focused on the liturgy: the “SACRA LITURGIA” international symposium at the Pontifical University of Santa Croce (Holy Cross) from June 25 to 28, 2013, formally ending with participation in the Mass celebrated by Pope Francis the following day for the Feast of Sts. Peter and Paul; and the official presentation of the program for the second “SUMMORUM PONTIFICUM” pilgrimage on Wednesday, June 26, at the conference hall of the Church of Santissima Trinità dei Pellegrini. This is a church Benedict XVI himself established through the Rome Vicariate as personal parish for the traditional-minded community. 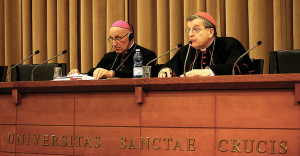 As stated by the main organizer of “Sacra Liturgia,” Bishop Dominique Rey of Fréjus-Toulon, the symposium was meant to be a tribute to the liturgical vision and achievements of Benedict XVI. For this purpose, a number of renowned Churchmen and scholars were brought together for an event which Pope Francis himself, through a message conveyed by the state secretariat, encouraged as an “auspicious initiative to promote the role of liturgy in the life and mission of the Church.”

Moreover, prominent cardinals, bishops and liturgical experts were not only invited to deliver speeches, but also to “practice what they preached,” with the daily celebration of solemn pontificals and vespers in both the ordinary and extraordinary forms in the adjacent Basilica of Sant’Apollinare. Cardinals Antonio Canizares and Walter Brandmüller were among the celebrants. 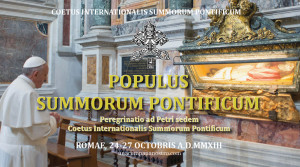 A poster for the pilgrimage of traditional Catholics to Rome October 24-27. Pope Francis is praying before the tomb of Pope Pius V.

Regarding the other event, the second “Summorum Pontificum” pilgrimage for those faithful attached to the old or extraordinary rite of the Mass: the pilgrimage’s chaplain, Father Claude Barthe, has announced that it would take place in Rome October 24-27. This time, besides the procession and Mass at St. Peter’s on Saturday, October 26, there will be a Via Crucis (Way of the Cross) in the streets of Rome on Friday, October 25, and the closing Mass on Christ the King Sunday. This Mass will be celebrated by Bishop Fernando Areas Rifan, the bishop of the Apostolic Administration St. Jean-Marie Vianney in Campos, Brazil, whose apostolate is based on the use of the Gregorian or extraordinary rite of the Mass.

Another major novelty is that the pilgrimage organizers have entered into an exclusive partnershp with Opera Romana Pellegrinaggi (ORP), which is the official pilgrimage-organizing branch of the vicariate of Rome, a department of the Holy See, under the direct supervision of Cardinal Vicar of Rome Agostino Vallini. ORP has launched three special packages for interested pilgrims traveling as individuals, couples and/or families. Further information and bookings can be accessed in six languages by clicking here

It is summer time. What about the Vatican? All public audiences are suspended in July and August, and even if the Vatican media keep reporting POPE FRANCIS’ daily homilies, the Mass is closed to the general public. Still, over the summer he will lead the Angelus prayer every Sunday. The Pope will not go on vacation and “doesn’t plan to move elsewhere,” said Fr. Federico Lombardi, spokesman of the Holy See. Furthermore, he didn’t use to go on holidays when he was a bishop and then a cardinal… he doesn’t like to move, and he repeated: “I am a homebody” (“tipo casalingo”). In July, the Pope prepared his homilies for World Youth Day in Rio de Janeiro from the 22nd to the 29th. The program was intense. Besides meetings with young people, he visited the Shrine of Our Lady of the Conception of Aparecida and the Community of Varginha.

Unlike BENEDICT XVI, Francis is not going to the mountains, but is remaining at Domus Sanctae Marthae in Vatican City. Only twice did he go to Castel Gandolfo, where his predecessor loved to spend his summer time.

Francis went to Castel Gandolfo on July 14 for the Angelus Prayer from the papal residence, and on August 15 for the Mass at the local parish church. 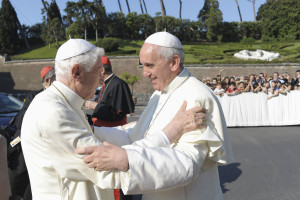 Residents are disappointed, because of the special bond they have with the Pope, while retailers also fear the lack of tourism related to the presence of the Pope.

On the first “official” day of vacation, Francis decided to fly to Lampedusa. And perhaps he will do something else unexpected before October.

Cardinal Tarcisio Bertone, the secretary of state, spent two weeks at Les Combes, in the Alps, hosted in the chalet where Pope Benedict and Pope John Paul II before him spent summer holidays.

Pope Francis is said to be making use of his summer holidays to prepare changes at the top of the Roman Curia. Closed in his office, in a semi-deserted residence, he will be able to study dossiers and documents and — why not? — walk in the Vatican Gardens.

There, perhaps, he may meet the Pope Emeritus.

Benedict XVI will remain in his new house, the ex-cloister Mater Ecclesiae inside the Vatican. His brother visited in August, as he has done each summer. A room is ready for him on the ground floor. Months after stepping down from his papacy, Benedict XVI has regained energy and is now more relaxed. He reads a lot, though less than some years ago, due to his eyesight, and he has started to receive people. One of the first was the German scholar Manfred Lutz, who told Bild Zeitung that Benedict XVI is “lucid, fun and has a good sense of humor” and described his current life as quiet and relaxed: “I read, I pray. I’m fine, I live like a monk,” Benedict told him.