The Pope encouraged the participants in the two major events marking May 12 as Italy’s NATIONAL DAY OF PRO-LIFE MOBILIZATION: a collection of signatures in the Italian parishes in support of a Europe-wide campaign for the legal protection of the embryo and the PRO-LIFE MARCH in Rome from the Colosseum to Castel San’Angelo.

“I greet all the participants in the March for Life which took place this morning in Rome and urge everybody to maintain keen attention on such an importance theme as respect for human life from the moment of conception,” Pope Francis said. “In this regard, I would mention also the collection of signatures taking place today in many Italian parishes, in order to support the European initiative Uno di noi (“One of Us”) aimed at guaranteeing juridical protection of the embryo, safeguarding every human being from the first instant of existence. A special moment for those who have the defense of the sacredness of human life at heart will be the Giornata dell’ Evangelium Vitae (Day of Gospel of Life) due to take place in the Vatican, in the context of the Year of Faith, on June 15-16.” 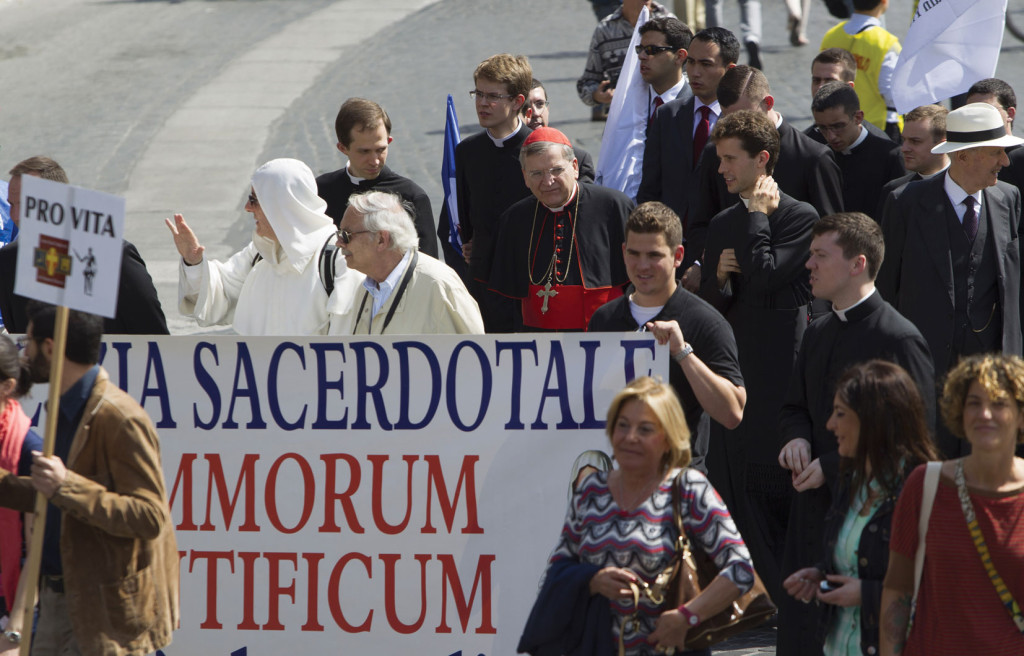 The National Day of Mobilization for the Uno di Noi campaign and the march for life “represent two major events for the growth of awareness with regard to the right to life,” Honorable Carlo Casini was quoted as saying in a Radio Vatican broadcast for the occasion. He is the president of Italy’s Movimento per la Vita (Pro-life Movement) which is officially supported by CEI (the Italian Bishops’ Conference) and protagonist of the pro-life march in Rome. His organization, also with the backing of the European Bishops’ Conference, is the main promoter of the Europe-wide petition campaign Uno di Noi, for European Institutions to guarantee not only the right to life from conception, but also to end any European Union funding to destructive research on human embryos.

The 2013 March for Life has seen the participation not only of Italian religious institutions, parishes, NGOs and lay associations, but also a significant presence of foreign delegations, including the president of the Washington March for Life, Jeanne Monahan, and the young American president of Live Action, Lila Rose. Among the prominent personalities were also Gianna Emanuela Molla, the daughter of St. Gianna Beretta Molla; Nicholas Windsor, son of the Duchess of Kent, and the granddaughter of Queen Elizabeth; and the mayor of Rome, Gianni Alemanno. Among the estimated 10,000 marchers (according to the police, 30,000 according to the organizing committee), other prominent religious and lay personalities were also present, including Cardinal Raymond Leo Burke, current prefect of the Supreme Tribunal of the Apostolic Signatura, together with a number of other senior local and national politicians.

BACK TO THE VATICAN 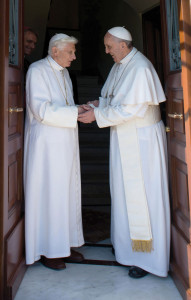 In early May, EMERITUS POPE BENEDICT XVI, 86, returned to Vatican City two months after renouncing the papacy on February 28.

Benedict came from Castel Gandolfo, a small town outside of Rome which contains the extraterritorial Vatican properties known as the Papal Summer Palace, where he has been staying since his resignation. He was accompanied by his personal secretary, Archbishop Georg Gaenswein.

Pope Francis, 76, greeted Benedict XVI at the door of his new home, a refurbished convent called the Mater Ecclesiae (“Mother of the Church”) Monastery in the Vatican Gardens behind St. Peter’s Basilica.

Together, Francis and Benedict went to the monastery chapel for a brief moment of prayer.

But, as Vatican Radio reported, “In style with his own personal manner, Pope Francis left the formalities of a welcoming ceremony to Vatican authorities, who awaited the arrival of the Pope Emeritus at the Vatican heliport.”

The first people to greet the Emeritus Pope upon his return, when he landed at the helicopter pad at the very highest point in the gardens (above where the former Pope’s new home is), were Cardinals Giuseppe Bertello, 70, President of the Governatorate of  the Vatican City State (the equivalent of the “mayor” of Vatican City), Cardinal Tarcisio Bertone, 78, the Vatican Secretary of State, and Cardinal Angelo Sodano, 85, the Dean of the College of Cardinals. Also present were Archbishop Angelo Becciu, Substitute for General Affairs, 64, Archbishop Dominique Mamberti, 61, Secretary for Relations with States, and the Secretary General of the Governatorate, Archbishop Giuseppe Sciacca, 58.

In the small building, with a chapel attached, Benedict will live with his personal secretary, Monsignor Gaenswein, and the four consecrated women of the Memores Domini (“Rememberers of the Lord”) group, who will do the housekeeping and prepare meals. Inside the building, Benedict has at his disposal a small library and a study.

His books are said to be arranged in the same order as they were in his apartment just outside St. Anne’s Gate when he was a cardinal. A guest room is available for when his brother, Monsignor Georg Ratzinger, 89, comes to visit from his home in Regensburg, Germany.

Benedict will also have the piano which he had in the Apostolic Palace. —Robert Moynihan 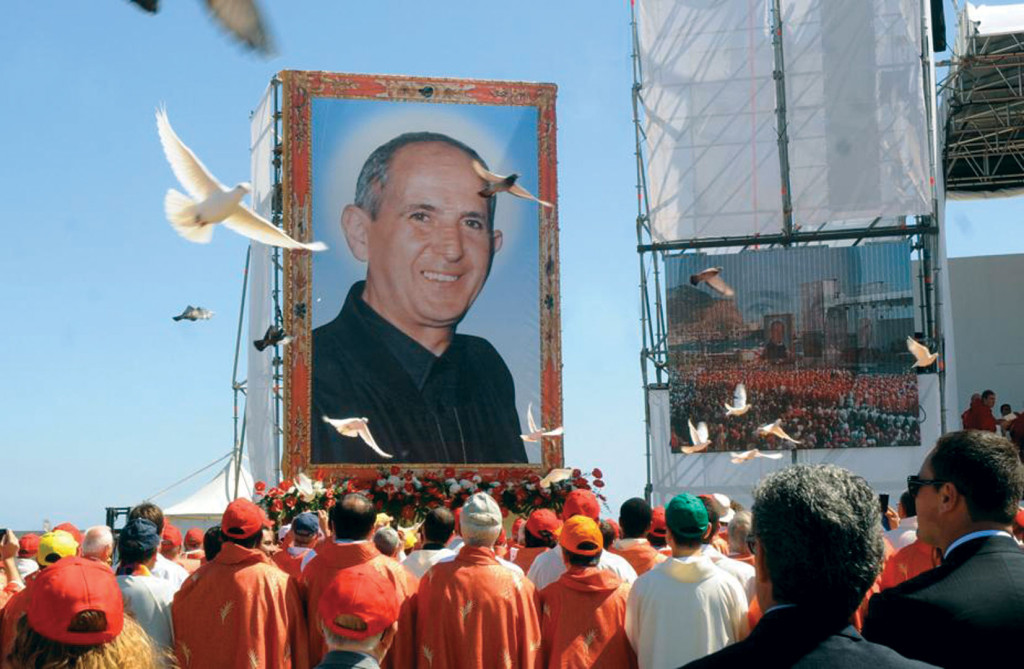 On May 25, more than 50,000 people attended the beatification of Father GIUSEPPE “PINO” PUGLISI, an Italian priest murdered in 1993.

He was killed by the Mafia on his 56th birthday in the Brancaccio neighborhood in Palermo for speaking out against the degenerate thugs.

He is the first victim of organized crime to be declared a martyr by the Catholic Church.

The beatification ceremony took place in Palermo, the Sicilian capital where he worked in a mobster-infested, poor neighborhood.

The cardinal emeritus of Palermo, Salvatore De Giorgi, presided at the beatification as a representative for Pope Francis with dozens of priests and officials.

A TRIBUTE TO THE POPE’S HOMELAND

The show, ARGENTINA, THE GAUCHO: TRADITION, ART AND FAITH opened May 17 and runs until June 16 in the Vatican’s Braccio di Carlo Magno—a hall next to St. Peter’s Basilica.

Planning for a Vatican exhibit on Argentine gauchos had begun last summer, well before Benedict XVI announced plans to resign and the election of the first Pope from Latin America.

Roberto Vega Anderson, an Argentine, is the curator of a newly-opened exhibit at the Vatican.

Pope Francis, like most Argentines, is no stranger to the gaucho culture.

The hardworking horsemen who ranched cattle across the continent’s southern grassy Pampas plain became a symbol of national pride in the region.

Jose Hernandez’ epic 19th-century Argentine poem, Martin Fierro — about a fictional gaucho outlaw who fights for a better life — represents “the heart of our national identity,” the future Pope once wrote.

Then-Cardinal Jorge Mario Bergoglio of Buenos Aires published an essay in 2002 using the famous literary gaucho as a figure for reflection about the future of the nation.

As the exhibit shows, the gaucho used the poncho as a coat and blanket at night, ate with his knife — the facon — and carried a hollowed-out gourd or ox horn for drinking his herbal tea called maté. When they could, gauchos would embellish their tools and horse trappings with ornately designed silver.

Father ADOLFO NICOLAS, since 2008 the 30th Superior General of the Jesuits, has been appointed president of the International Union of Superiors General (UISG), which represents the superior generals of more than 200 male religious orders. Fr. Nicolás will serve a three-year term and succeeds Franciscan Father José Rodriguez Carballo.

Founded by the Congregation for Religious, UISG’s purpose is to promote the life and mission of individual institutes that work in service of the Church in order to make their collaboration more efficient and contact with the Holy See and the hierarchy more fruitful.

A series of 400 collectible stickers that tell the life of newly elected POPE FRANCIS is on sale in Italy. The set, on sale at news stands, is called Album della Gioia (“The Album of Joy”) and covers the life of the Argentine pontiff from his days as a tango-dancing youth in Buenos Aires to being elevated to the throne of St Peter earlier this year. Packs of five stickers cost 60 cents. The album is sold separately for 2.50 euros.